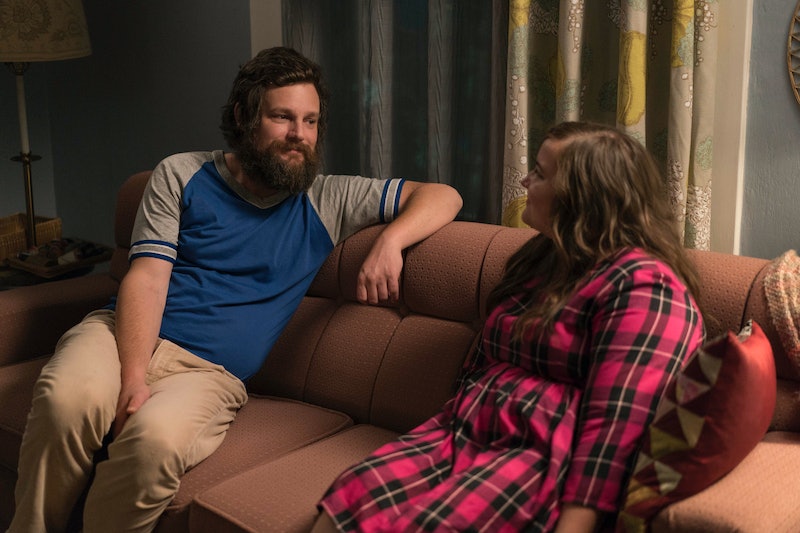 At some point in a gal’s life, she has a partner that she knows can’t commit, knows can’t give her what she wants, and still, she stays with him, anyway — or keeps going back. On Shrill, Aidy Bryant’s Annie is loosely dating Ryan, who according to TVLine, “hustles her out the back door” after they have sex so that she doesn’t have to interact with any of his friends. Lovely, right? Luckily, the actor who plays Ryan on Shrill doesn't sound like that much of a jerk. Besides acting, Luka Jones is into puppies and football. Sounds like we would get along.

Based on the book by Lindy West, Shrill is the story of Annie, a self-described fat girl in a world that is desperately trying to get her not to be. She lives with Fran, her confident best friend roommate, and she works at a Portland newspaper. She has a crap boss and a crap boyfriend, and she’s just trying to figure out how to fit in the world and still be herself. If you think it sounds familiar, you’re right — Annie’s struggles are definitely way relatable to that of many millennials in today’s world.

Jones plays Ryan, who, from the way he’s described, Annie should promptly dump. Jones’ other credits, according to his IMDB, include Her, Pillow Talk, People Of Earth, Comedy Bang! Bang!, Casual, Modern Family, Up All Night, and Best Friends Forever. You have definitely seem him on your television. He’s a comedian through and through, but his passion — according to his social media, at least — lies in sports.

One trip through Jones’ Twitter, and you’ll find he’s obsessed with the Los Angeles Clippers (that’s a basketball team, in case you didn’t know) and Doc Rivers, their coach. He tweets and retweets about them… a lot lately. And why not? Everyone needs a hobby. But that’s not all — he also loves the Los Angeles Rams (that’s a football team). According to an interview with Field Gulls, Jones feels strongly about cheering for the team in the city in which you live. Sorry, Dallas Cowboys fans who live in New Jersey. You’re out of order! Jones also has many pictures of him and a very cute puppy on his Instagram, so the man is clearly an animal lover. I hope Jones is prepped to have a lot more fans after Shrill starts.

And speaking of his brand-new show, it was important to Bryant that Annie have attractive partners to show that yes, fat people have sex, too. They have friends and boyfriends and girlfriends and everything in between. “I always had, like, sex,” Bryant said in an interview with USA Today. “I always had sexual partners who were attracted to me or I dated. I had great best friends who filled out my life. ... And I think that’s what we were truly trying to show. A full life of a fat person. ... Some of that stuff is really painful and difficult, but I also relate to a lot of the more joyful elements, too."

Think what you want about Ryan on Shrill, but Luka Jones is definitely a guy that fans will want to get to know better.