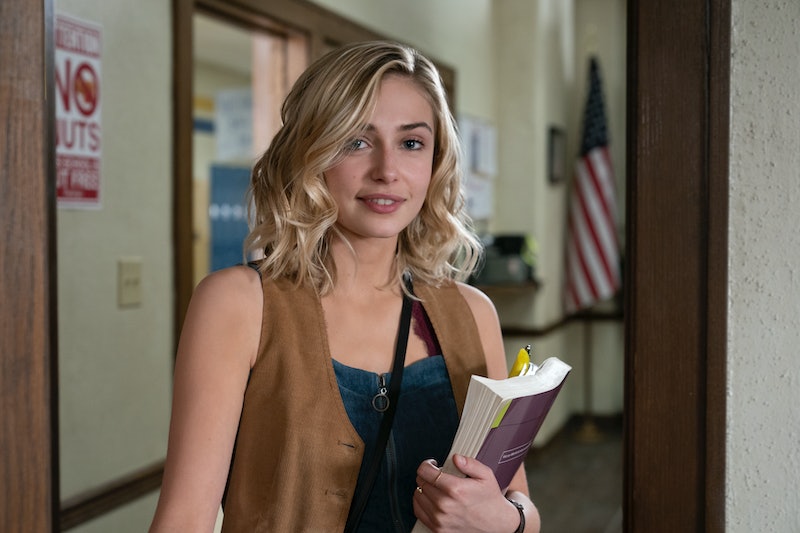 Netflix's new post-apocalyptic dramedy, Daybreak, is focused on Glendale survivor Josh Wheeler, but its true driving force is the love of his life, Samaira "Sam" Dean, who he's trying to locate in the aftermatch of a civilization-destroying atomic bomb. A soulful, radiant girl who is well-liked by everyone she meets, Sam's presence is felt throughout the show even when she's not onscreen. Playing Sam on Daybreak is British actor Sophie Simnett, and interviews suggest she's just as sunny and positive as her fictional counterpart.

Simnett hails from West London, and is most famous for being the star of UK Disney's The Lodge, a musical drama about a group of teens who live in a hotel in Northern Ireland. Simnett played protagonist Skye for two seasons, during which time she was very aware of the platform she had as a budding Disney star. "Our audience is really impressionable — young teen girls and boys — and it's important to use our platforms to educate," Simnett told Wonderland Magazine in 2016. "I think it’s important for everyone to be inspired, but not idolize necessarily."

Though Simnett is still a relative newcomer when it comes to lead roles, she seems to be very thoughtful about her public persona, and what it means to be a role model for younger viewers. She definitely exudes positivity in her interviews, including a BAFTA kids video in which she played 60 second questions with Lodge co-star Luke Newton. When asked, "If you were queen for a day, what would you change?" Simnett responded, "I just want everyone to be happy." She also said that her favorite word is "spontaneous," and the first person she's celebrate with if she won a BAFTA would be her mom.

After The Lodge, Simnett nabbed minor TV roles including cameos on the British shows Endeavor, Ransom, and Poldark. Playing Sam in Daybreak marks the first lead role she's had since The Lodge, and both characters definitely feel in line with Simnett's own outlook.

Though Daybreak is a meta, pop culture-savvy, irreverent comedy, Sam Dean is easily the most grounded character — the emotional core of the show. (And to get it out of the way, yes there's a good chance "Sam Dean" is a meta reference to Supernatural, as Josh's actor Colin Ford played the young Sam on the show.) Sam is first introduced to Josh because he needs a school guide, and she's so universally well-liked at their high school that it's easy to see why the principal chose her to do it. Viewers will mostly get to know Sam from flashbacks at first, but it's clear that she's important to Josh, and the story, because she's everything he's not: optimistic, connected to those around her, and believing in the intricate goodness of people.

Fans will have to wait and see if Josh succeeds in finding Sam in the Mad Max-ian teenage wasteland. Simnett, meanwhile, is just happy to be a part of the project — and the strong cast chemistry she speaks of can only mean good things for the success of the show. "Being on the set and because everything is so new and crazy, we just had no idea what was coming," she told Entertainment Tonight. "We had this excitement that we got to share together."

More like this
Every 'That '70s Show' Character Who Returned For The Netflix Spinoff
By Grace Wehniainen
'The Crown' Season 6 Has Suspended Filming "Out Of Respect" For The Queen's Death
By Bustle Staff
Ozzie’s Coming Out Scene With Kitty On 'That ’90s Show' Has Twitter Sobbing
By Brad Witter
Here’s Everything Coming To & Leaving Netflix In February
By Jake Viswanath
Get Even More From Bustle — Sign Up For The Newsletter
From hair trends to relationship advice, our daily newsletter has everything you need to sound like a person who’s on TikTok, even if you aren’t.