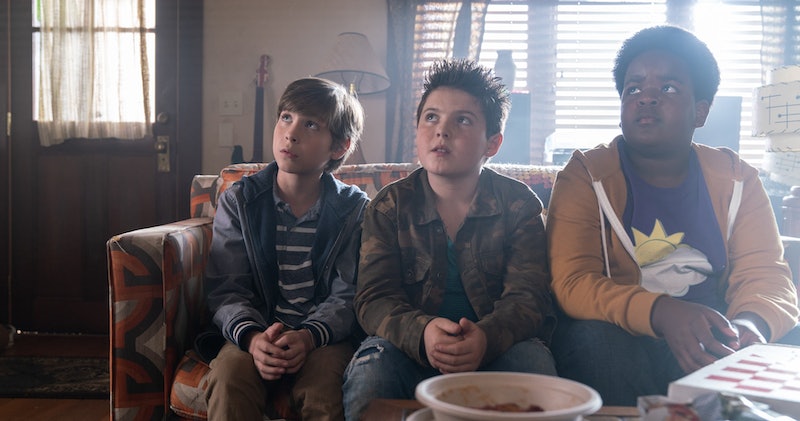 Pretty much every generation has had their raunchy comedy about guys getting into trouble. From Animal House in the '70s and Porky's in the '80s to American Pie in the '90s and Superbad in the '00s, the films have always featured either college-aged men or high school boys after girls and glory. But Good Boys is changing up the formula by centering a trio of middle school boys who are navigating changes in their friendship and are curious about all this kissing business. The actors playing the kids in Good Boys are savvy and talented enough to headline an R-rated comedy, so you'll probably want to keep them on your radar.

Odds are, you'll recognize at least one, if not all three, of the "good boys." First up is Jacob Tremblay. The now-12-year-old rose to fame in 2015 when he starred in Room alongside Brie Larson. Tremblay portrayed the son of Larson's character, a boy who had lived his entire life in a single room due to his mother being the victim of a kidnapping prior to their escape. The film earned loads of acclaim for Tremblay (and for Larson, who won a Best Actress Oscar for her performance), and led to subsequent high-profile starring roles for him in films such as The Book of Henry, Wonder, and The Predator.

In Good Boys, Tremblay essentially plays the leader of the film's young friend trio, Max. The movie's plot revolves around Max being invited to a kissing party and, not knowing the first thing about kissing, enlisting his two best friends Lucas and Thor to help him gather intel on the subject. They attempt to use a drone belonging to Max's father to spy on some teenage girls in their kissing knowledge quest, but end up losing the drone and going on an adventure to retrieve it.

In the film, Max's dad is played by former SNL star Will Forte, and fans of the comedian should also recognize the 12-year-old actor who portrays Lucas in the film. He's Keith L. Williams, who co-starred with Forte on the Fox sitcom The Last Man on Earth. Williams joined the cast in the show's third season, portraying the largely silent (for several episodes, anyway) Jasper. Possibly the last kid left alive on the planet, Jasper became a member of Tandy's (Forte) group of survivors, basically staying on as part of the main cast until the series' cancellation.

Rounding out the titular Good Boys is Brady Noon, who plays Thor in the film. Like Williams, Noon may also be familiar to avid TV watchers — though you'd have to be playing very close attention. During the first three seasons of HBO's Boardwalk Empire, Noon portrayed the young Tommy Darmody, sharing the role with his twin brother, Connor Noon. Between his final appearance on the series in 2013 and Good Boys this year, Noon had zero professional acting credits according to his IMDb page, meaning the young actor looks very different now compared to the last time he acted, in his Boardwalk Empire days.

The three young actors in Good Boys have had varying levels of exposure in Hollywood, but after their memorable (and foul-mouthed) performances in the new comedy, it sure seems like all of them will be considered bona fide stars very soon.