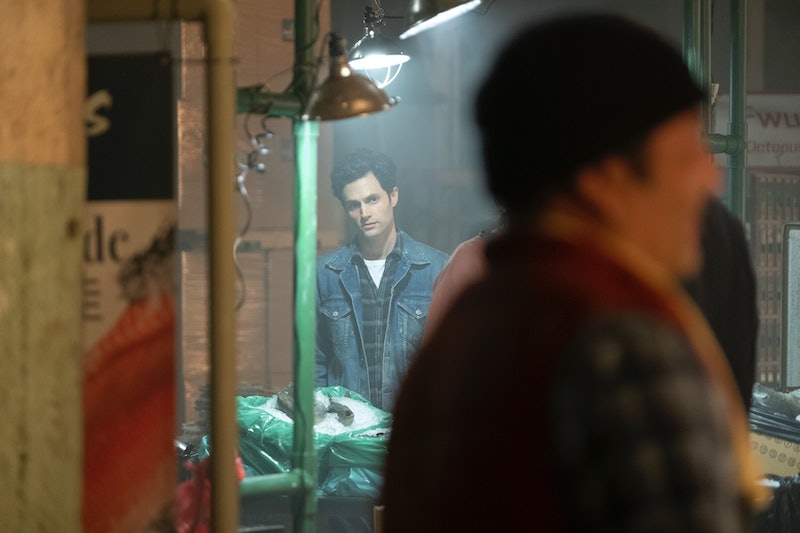 YOU Season 2 hooked fans once again with the murderous debauchery of one Joe Goldberg (Penn Badgley) as he set his sights on another obsession, Love Quinn (Victoria Pedretti). But at the end of the season, there was only one question remaining, and it wasn't about Joe — or Love. Fans wondered about the identity of the mystery woman in YOU, and more importantly, who played her.

Spoiler alert for YOU Season 2. Right before the final episode of the season came to a close, Joe was seen peeking out of the fence from his new house into the neighbor's yard, as a woman laid out by the pool reading a book. Her face is blocked by a glamorous sunhat, but her hand is seen as she reaches for the stack of books next to her. And she's wearing one significant piece of jewelry: a wedding ring! "Hello, you," indeed. The episode shared no details of who this mysterious lady was, but some viewers may have missed that the show did indeed reveal who played her.

IMDb lists actor Tiffany Lonsdale as the woman behind the character, who simply carries the title "mystery woman." Her name can also be seen in the end credits of the episode. However, it's not known if she'll return for the show's third season in 2021 — she's only listed on IMDB as being in one episode — or how her character would be involved. She's also currently starring on Freeform's Siren as Tia. Bustle has reached out to Lonsdale's representatives for comment.

Upon watching the episode, fans immediately started speculating that the mystery woman was actually Joe's estranged mother, especially given that the hand seemed to belong to a married woman. However, Badgley already debunked that theory in an interview with Bustle on Thursday, Jan. 9, remarking that "she's definitely not his mom." Lonsdale's casting also disproves this theory, as she did not play Joe's mom in Season 2. This means that the possibilities of her identity are wide open.

Some people on Reddit have speculated that the woman is Dr. Nicky's wife, who wants to go after Joe for putting her husband in prison for a false crime. It would explain the wedding ring. And given her obvious affinity for literature, some viewers even suspected that she might actually be... Guinevere Beck (*gasp*), which would mean the return of actor Elizabeth Lail. It could also be any of Beck's relatives or friends who are still living, out to avenge her death.

Although these theories are much more exciting, it's always possible that she's just another beautiful woman who crossed Joe's path — unfortunately for her. Fans will know for sure when YOU returns for Season 3. But until then, as Joe said, "See you soon, neighbor."