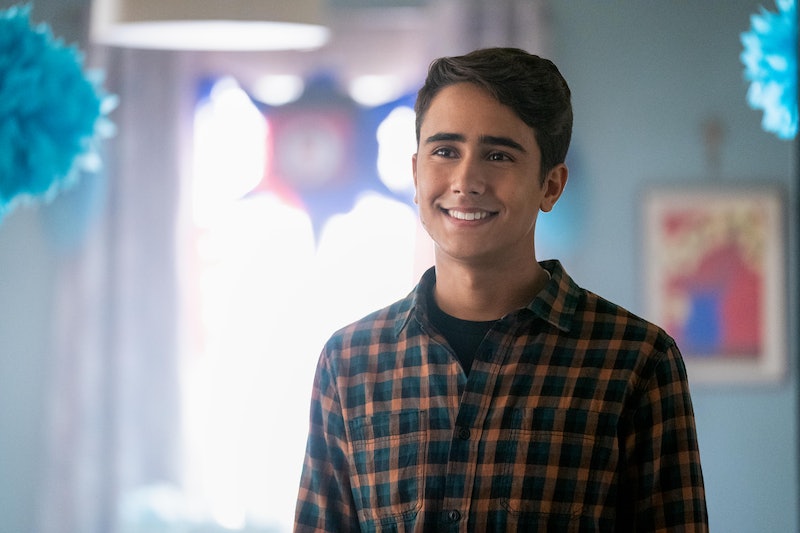 When it was announced that there would be a television spinoff of the popular film Love, Simon, many fans expected to see more of Nick Robinson's titular character. But the series — called Love, Victor — focuses on a new high schooler at Creekwood, a timid transfer student named Victor. Love, Victor's Victor Salazar is played by Michael Cimino, an up-and-coming actor who hasn't been in too many big projects just yet — but is likely to become a star to watch.

In the series, Victor is new to Creekwood, the same town from Love, Simon. Unlike Simon, who knew he was gay but just wasn't out of the closet, Victor hasn't totally labeled his sexuality yet. Over the course of the 10 episodes, he works to figure out who he is and how he feels with some help from new friends as well as Instagram DM advice from Simon himself.

Before taking on this role, Cimino was best known for playing Bob Palmeri in the 2019 horror movie Annabelle Comes Home. Aside from that he's had some one-off roles in shows like Training Day and Walk the Prank, and he filmed a pilot episode for the Nickelodeon show Hopefuls that didn't end up getting a series order. He's also done a Geico commercial, which a fan of Cimino's recently dug up.

After Love, Victor, Cimino is set to appear in two movies, Centurion XII and Heartlight. Not much is known about either one yet as they're still in various stages of production.

Notably, Cimino is also a singer. He actually contributed to the Annabelle Comes Home soundtrack with the song "Everything I Own." Cimino often posts videos of him singing and playing the guitar or piano on his social media pages. Maybe this can be a hidden skill of Victor's in Season 2?

Love, Victor is Cimino's first real leading role, and it's a really important one. Not only is the show about a teen figuring out his sexuality, but Victor is doing so while in a conservative Latino family. Cimino knows that this is a perspective from which stories aren't often told, and he took that very seriously. "It's an honor," he told Entertainment Tonight of playing Victor. "It gives people a chance to see the struggle through a different lens."

And while Cimino didn't have the same struggle to figure out his sexuality that Victor did, Cimino told the Gay Times that he has a cousin who's gay that he ended up modeling Victor after to give an authenticity to the role. "I asked him about his story, and how it affected him, and we kind of went on a deep dive," Cimino says of building the character with his cousin in mind. "I wanted to represent his struggle."

He added in an interview with Good Morning America that he thinks Victor's struggles will be relatable for a lot of young people. "I do feel like some people will be able to relate to this story in particular because a lot of people haven't had the blessings to know exactly what decision they were making," Cimino said. "They didn't know how they felt about their sexuality ... I just feel really honored to represent a different struggle than the one Simon went through."

Ultimately, Cimino told GMA that he hopes the series and his portrayal of Victor "inspires people to be who they are authentically and with no regrets."