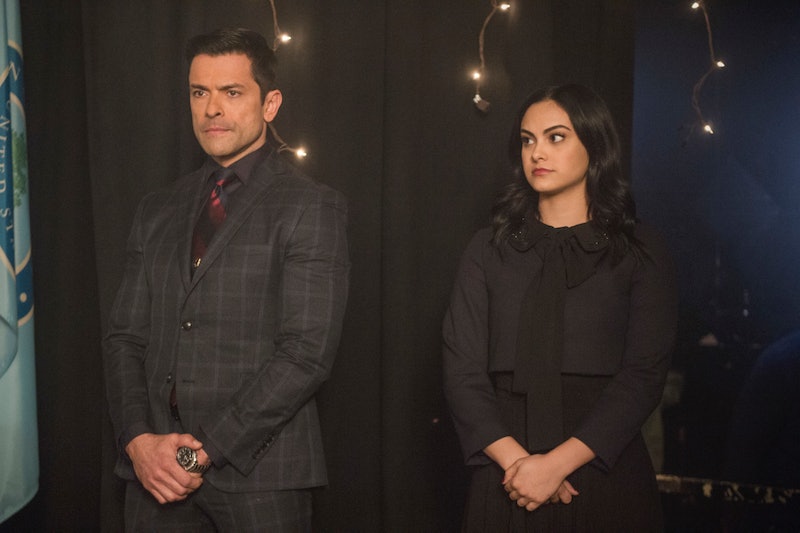 Spoilers ahead for Season 3, Episode 10 of Riverdale. Now that Archie's back in town, he wants nothing more than to stop The Man In Black, aka Veronica's father — but did he go as far as actually shooting Hiram Lodge on Riverdale? After taking a bullet, the usually unstoppable supervillain will be laid up for a while. But he's in the hospital and on the mend, and soon enough, he's going to come for whoever did this to him.

Archie fled the SATs shortly before Hiram was shot, which put him on the top of Veronica's suspect list. When she confronts him about it, the two realize Archie's escalating conflict with Hiram is too much of a strain on their relationship, and decide to officially break up. He does, however, assure Veronica he didn't do it, but Archie is a pretty unreliable narrator at this point. Just an episode ago he played G&G with a bunch of dead people and seemed to think that was only slightly weird. He also kept saying he feels unsettled — and he does have a giant motive to kill Hiram, namely that Hiram was also trying to kill him.

But on a show like Riverdale, you have to consider every possibility. Sometimes the answers are right under your nose. Here are some theories about who it could be.

He may not remember doing it, but Archie has been suffering from what seems to be PTSD since his return to Riverdale. He keeps seeing himself holding a knife and standing in a room with Hiram, and it seems to be affecting him emotionally and physically. He's been through a lot, and he could have gone into a fight or flight state and blocked it out from memory.

Archie's father made it very clear to Hiram that if he hurt Archie again, Fred would come for him no matter the consequences. Perhaps he decided to make good on that promise.

Claudius was found unresponsive in his jail cell, so maybe someone decided to rise up against the dangerous duo and take them both out.

When Archie came back to Riverdale, Veronica put the breaks on whatever was developing with Reggie. He was not pleased about that, and when Archie ran out of Veronica's cabaret, Reggie could have decided Archie didn't deserve Veronica anymore. Maybe Reggie shot Hiram to frame Archie so he could get together with Veronica. And if that was his plan, it's all working perfectly. Veronica welcomed Reggie and his Get Well Soon flowers at the hospital with open arms.

The Serpents' plan to catch Hiram didn't work, and we know Fangs and Sweet Pea had a gun to watch over Tall Boy with. Maybe they decided to take matters into their own hands and try to win back Jughead's respect for bringing Hiram down.

Whoever shot Hiram, their plan ultimately didn't work. He may be sidelined for a bit, but he's coming back. And when he finds out who tried to take his life, he's likely going to be even less merciful than ever.