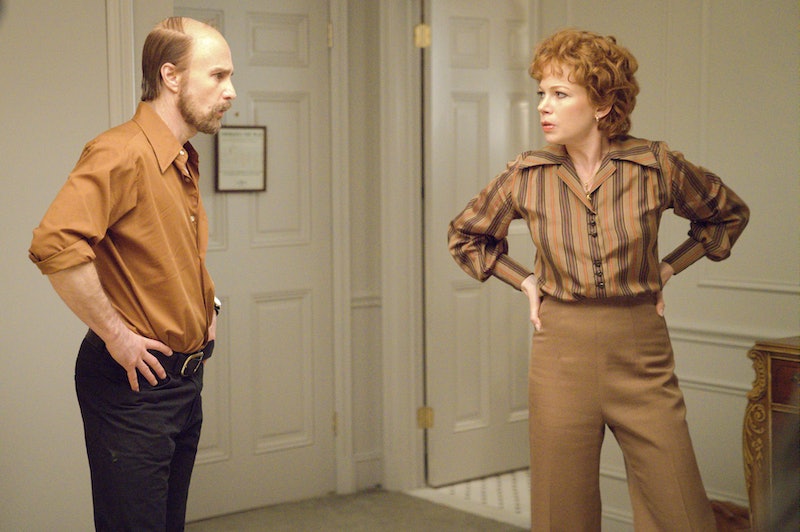 Gwen Verdon's partnership with and marriage to Bob Fosse was responsible for some of modern musical theater's best performances. But Verdon had a successful career before she met and married Fosse During the April 23 episode, Fosse/Verdon shows Verdon's first husband James Henaghan, played by Broadway actor and Crazy Ex-Girlfriend star Santino Fontana. According to Verdon's obituary in The New York Times, she was only 17 years old when she married the writer for The Hollywood Reporter. And while it seems that Fosse/Verdon has taken some liberties in depicting Verdon's first marriage, it wasn't a happy time in this dancer's life.

Fosse/Verdon is based on the 2013 biography Fosse by Sam Wasson. And according to the biography, Verdon and Henaghan eloped six months after meeting. The teenaged Verdon lied about her age to the justice of the peace and said she was 22. Fosse author Wasson described Henaghan as "witty, older, dashing," but he did note that the journalist also had drinking and gambling problems. "When he woke up in Kansas City with no idea how he got there and a column past due, he called Gwen in the middle of the night and she wrote the piece and filed it for him," Wasson wrote. So it seems she often saved her husbands when it came to their work, as Fosse/Verdon fans have likely noticed..

While Entertainment Tonight reported that Verdon married Henaghan because she had become pregnant with his child, that doesn't seem to be the case as outlined in Fosse. But they did have a son together — Jim Jr. — and when he was just a baby, she left Henaghan on New Year's Eve 1943.

During a 1983 interview for the public access show Spotlight, Verdon laughed when the interviewer noted that she had married at that time because she was in love and it was the "proper thing to do." Verdon said with a laugh, "I did not think it was the proper thing and I was not in love."

Once she left Henaghan, she was a single mom in the 1940s, which wasn't very accepted at the time. "It shocked everybody, including me a little bit," Verdon said on Spotlight. "But I was determined to have that child. I'm sure glad I had him, he's a fabulous human being."

Yet, her life as a struggling single mom changed in the latter half of the 1940s. Although she had given up dancing after she married Henaghan, Verdon introduced herself to choreographer Jack Cole when she saw his group perform at a night club she was reviewing. According to Wasson, in 1947, she filed for divorce from Henaghan, left her son Jim with her parents in California, and joined the chorus of one of Cole's shows in New York City.

From there, her career took off with the Los Angeles Times reporting that she earned four Tony awards in just six years during the 1950s.

If Verdon had stayed with Henaghan, she may never have become the Gwen Verdon that the world knows today. But it did come with a price since she wasn't totally present when it came to raising her son with him. As Jim Jr. said in the Fosse biography, "My mom had to decide whether to become a shop girl and take care of her kid or pursue her career, and her need for dance. That was a tough decision for her to have to make and it bothered her a great deal, but it was her choice and we all went along with it." And while her second marriage wasn't necessarily the healthiest either, Verdon found a lifelong partner and collaborator with Fosse.