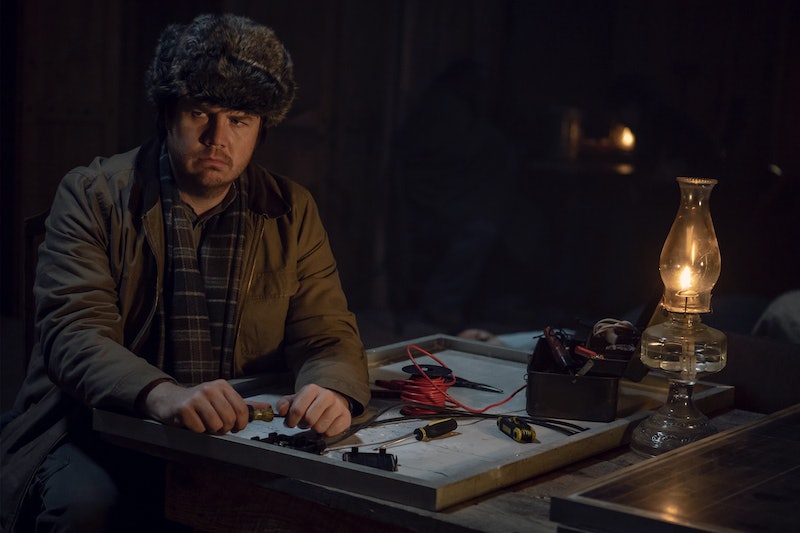 Eugene may be caught in a love quadrangle on The Walking Dead, but his tech tinkering had a major breakthrough in the Season 9 finale. Someone was on the radio on The Walking Dead, which is kind of amazing. The world is getting bigger again, thanks to one mysterious voice.

At the end of the episode, King Ezekiel and Judith chat via radio. Little Miss Grimes is in Alexandria, while the King is at the Hilltop. (No word on whether Carol is with him or Daryl, or what the heck happened between the three of them over the missing six years. It's going to take a long time for my heart to settle with all of that drama.) After Zeke hangs up and leaves, a voice comes on the radio. It's muffled at first, but inquisitive. The only truly discernible phrase come at the beginning and end of the broadcast — "hello" and "is anybody out there?" Who is trying to contact them?

It doesn't sound like Rick Grimes, unfortunately. Sorry, fans who were theorizing this ahead of the episode. It's true that Rick loves talking into the void via walkie talkie, no matter how unlikely it is that anyone will respond. However, the voice on the radio sounds female.

It's probably not Alpha. We can rule that out right now. For one thing, the Whisperers don't believe in technology, and even if she was listening to communications between the Hilltop and Alexandria, Alpha wouldn't have any reason to chime in or try to trick them a second time. That kind of ruse wouldn't work. Too many of them know what her voice sounds like. So who is it?

In the comics, Eugene gets his radio working and gets a surprising response from a woman named Stephanie at the Commonwealth, a large community of survivors in Ohio. She and Eugene start talking back and forth, and even have a romantic relationship once they meet in person! Honestly, please let this happen on the series. Eugene has been moping about Rosita for far too long.

This is the most likely theory, in my opinion. "Fans of the comics probably know that that is a storyline directly from the comics," executive producer Denise Huth teased about Eugene's radio in an interview with Digital Spy ahead of the finale. "There is a big story with the radio. I like how we have chosen to introduce it. We introduced it way back in episode 6 when they were first trying to set it up. And then [...] we see Eugene working on it again with Rosita."

Don't think I didn't notice that Michonne asked about Maggie in this episode, and whether or not anyone had heard from her lately. Could that have been a little bit of foreshadowing? There's also a theory that Maggie is at the Commonwealth, so these could all be connected. Maybe Maggie told someone there to try and contact the Virginia area.

Maybe your Rick theory wasn't wrong exactly. It could be that, wherever Anne took Rick, they're ready to get back in touch. There is also, you guessed it, a theory that they're at the Commonwealth too.

There's a slight chance that this could be a Fear The Walking Dead connection. The spin-off characters had some radio drama in the last season, and surely Morgan would appreciate the chance to check in on Carol and his old friends. However, no matter who is on the other end of that radio message, it sure seems like the Commonwealth is coming to The Walking Dead in Season 10. They're not villains, just more people trying to survive, and we have a nice long hiatus to speculate about who and what else is coming next.