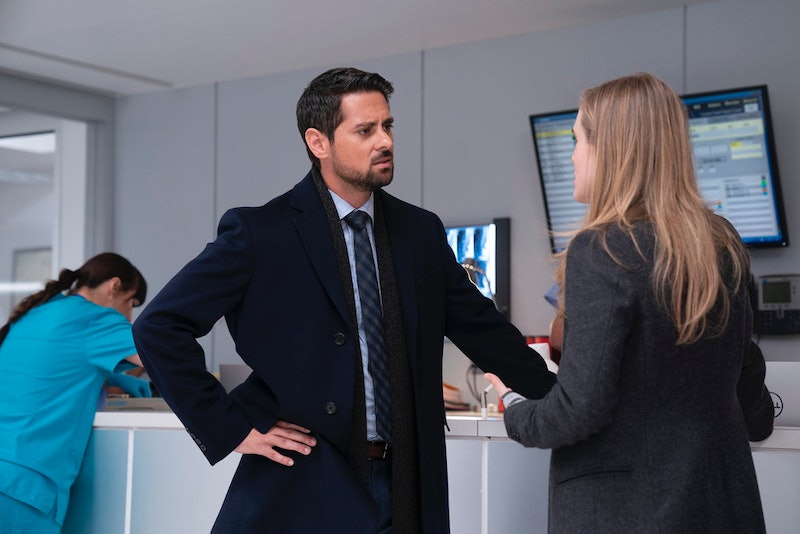 The Manifest finale had about a trillion cliffhangers, but the one that closed the show is what really has fans talking. Who got shot on Manifest? Michaela, Zeke, or Jared could be wounded or worse if and when the show returns for Season 2. But there has yet to be a renewal and, even if Season 2 is confirmed, it won't air for months, so it's time for fans to do some sleuthing of their own. All signs point to either Jared's death, or someone's injury but not death.

Let me explain. The creator of the show, Jeff Rake, did a few post-mortem interviews about the finale that were pretty revealing in that no matter what happens with the gunshot, Michaela and Zeke are likely still alive to keep the story going. Now, Michaela was an obvious choice to be shot, since the last time the audience saw the gun, it was seemingly pointed towards the door that she ran through moments later.

She also flinched at the end when the gunshot noise sounded, and we couldn't see her whole body. So, she could have been shot in her stomach, arms, or legs. But Rake made it sound like she's definitely around in Season 2 anyway.

In an interview with TV Guide, Rake discussed the repercussions of the passengers finding out they have an expiration date in 2024, and how that might cause some lawlessness that Michaela has to deal with.

"[It] will lead to a lot of questionable behavior that would create a lot of work for Ben and Michaela not only as self-appointed caretakers of the group, but also for Michaela in her role as law enforcement," Rake said. "There will be people within the passenger community who couldn't care less about breaking the law if they feel like they're not gonna be around for so long and so, the proverbial sh*t may just hit the fan."

Ok, so even if she's injured by a bullet, Michaela will be around to police the situation. Then, in an interview with Entertainment Weekly, Rake talked about Zeke's Season 2 future, which made it sound like he'd be around to keep writing plotlines about.

"Zeke is a gray character. He has a checkered background that he has acknowledged, at least to some extent, and it just begs the question of what constitutes goodness in a person and what constitutes badness? There’s a spectrum there and he lies somewhere in the middle," Rake said. "The calling is a tool that can be used to steer him in one direction or another. That will be one of the questions of Season 2, to see if he veers towards the darkness or towards the light."

If Zeke can do lightness/darkness venturing, then — even if he was shot and injured — he's not dead. But Rake hinted that the bullet doesn't hit the ceiling, it goes somewhere, into something — and possibly into someone. That leaves Jared.

"That bullet that you heard was not a car engine outside on the street. It did not hit the ceiling," Rake told TV Guide. "We'll come to discover that it found a target and there will be consequences at the top of the next season and consequences that will be long-lasting."

And, when pressed about Jared's future on the show, Rake would only talk in hypotheticals.

"[Jared] started the series very even-keeled — a voice of reason. We've seen him kind of unravel over these 16 episodes to a place of exasperation and darkness," Rake said in the same interview. "Should he survive that gun battle, a lot would have to be resolved before that dark place that he's in starts to lighten up."

Should he survive? It sure seems like Jared is the most likely option to die if the gunshot did indeed kill someone. Not to mention that in a scene with Michaela from an earlier episode, Jared is sitting next to a signs about gun safety and a cop being shot. Foreshadowing?

But there's an equally high chance that it simply hit and injured one of the three. And it seems most likely that Michaela would be the one injured by the bullet. After all, she's in that scene with the signs about gun safety and a cop being shot, too.

Both men also have a stake in her health and safety, and it would provide more story opportunities for them to both feel guilty about hurting her. Maybe it would even make them back off from being so suspicious of each other to know that their behavior led to her injury.

On Reddit, there are a couple of theories about why Michaela was the one shot (even though she probably won't be dying). Elangomatt theorized that Michaela being injured would give Jared a chance to be at her bedside like she was for him when he almost died. That could help solidify their bond for more seasons of romantic tension. Meanwhile, user KellyKeybored thinks that Michaela could be pregnant and rushing her to the hospital after a gunshot wound would also give doctors a chance to reveal that new piece of information. It's not the first time fans have speculated that Michaela could be having a baby.

Ultimately, though, the only person who could possibly end up dead is Jared. But given the tension that these three have, it would make for a much more interesting Season 2 if they all survived, but one was left with a gunshot injury. So that's probably the avenue that the show will explore. But fans will have to wait a while to find out for sure. At least, until then, we have a lot of clues pointing to Zeke and Michaela's survival. That's two less things to worry about.