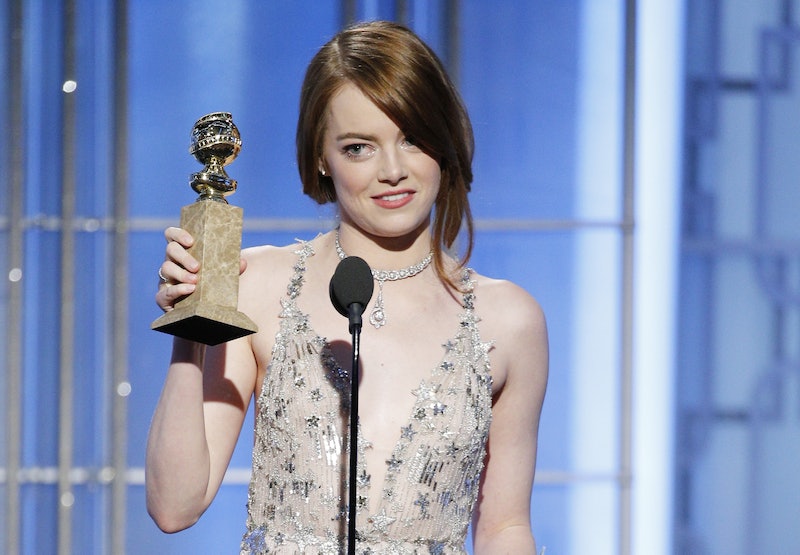 Before those golden orb-topped statuettes can be handed out at the 75th Golden Globes on Jan. 7, 2018, a certain thing must happen: Some humans have to unfurl the list of nominees and read them for all the world to hear. So, who will announce the Golden Globe nominations at the ceremony that's scheduled to take place on Monday, Dec. 11? Though the list of presenters has yet to be revealed, it's safe to presume that a few actors will be present, accounted for, and raring to read some noms. The Golden Globes (or as some like to call it, the Oscars’ cousin who enjoys getting sauced and getting creative with the table assignments for their annual party) deliver star power, and the nominations ceremony is no different.

UPDATE: On Friday, Dec. 8, the Golden Globes announced that Alfre Woodard, Garrett Hedlund, Kristen Bell, and Sharon Stone will be revealing the nominees on Monday, Dec. 11.

EARLIER: As recent Golden Globes history tells us, the nominations ceremony announcer roles are reserved for members of the Hollywood A-list. Last year, for example, the nominees were presented by the trio of Laura Dern, Don Cheadle, and Anna Kendrick. Oh, and the year before that? America Ferrera, Chloë Grace Moretz, Dennis Quaid, and Angela Bassett were in charge of reading off the noms. Kate Beckinsale, Paula Patton, Jeremy Piven, and Peter Krause were selected for the job in 2014. Before the 71st Globes, Aziz Ansari, Zoe Saldana, and Olivia Wilde were tasked with sharing who the HFPA had nominated that year. And so the list goes. The common denominator: They're all famous actors. Assuming the program doesn't switch up its formula in a major way, the individuals chosen to unveil the 2018 nominations on Monday at 5 a.m. Los Angeles time will probably be famous actors.

If you can't wait 'til Monday to find out who gets to announce the 2018 Golden Globes nominees, you might just be in luck. (Also, right there with you on your enthusiasm for award season.) For the past few years, the HFPA has revealed the lineup a few days before the nomination ceremony. Go ahead and get stoked.

While the nomination ceremony presenter list remains shrouded in a cloak of tinsel-trimmed mystery, that's not the case with the host of the award show. On Nov. 22, the HFPA confirmed that Seth Meyers will emcee the 75th Golden Globes. This will be the Late Night with Seth Meyers host’s first time at the helm of the annual award show. Fellow late-night talk show personality Jimmy Fallon hosted last year's Globes. Oh, and there's another Globes-related hosting detail: On Dec. 13, Debra Messing and Eric McCormack will emcee the Golden Globes’ 75th anniversary special on NBC.

Guessing who will present the nominees next Monday would be just that: a guess. There are just too many famous actors to choose from. Predicting which movies and TV shows will be nominated, on the other hand, is a manageable undertaking. For starters, as far as movies go, critically acclaimed films like Call Me By Your Name, Get Out, Lady Bird, and The Florida Project will probably rake in noms. And on the TV of things, celebrated shows such as This Is Us, The Handmaid’s Tale, Master of None, and Big Little Lies will almost certainly be included on the batch of nominees.

Best wishes to the group of actors who will have to be up and at 'em and camera ready before sunrise Monday morning.