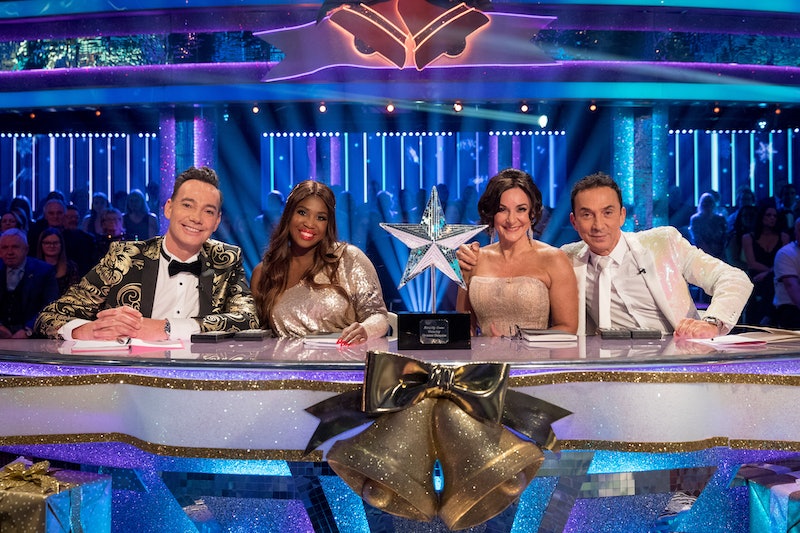 This year's Strictly Come Dancing final saw soap star Kelvin Fletcher dance his way to the glitter-ball trophy, and before fans say goodbye to the BBC competition series for another year, one more ballroom treat still lies in store. Yes, the show's annual festive edition is back once again, and a lineup of returning celebrities will take to the dancefloor in a bid to impress the onlooking judges and studio audience. But who will be appearing on the 2019 Strictly Come Dancing Christmas special?

Well, in addition to some show-stopping performances, former One Direction singer Liam Payne will be on hand to perform his latest track "All I Want For Christmas" — and, as previously reported by Bustle, the BBC have already revealed which famous faces are taking part. The 2019 Christmas Special is going to involve some well-known faces, and will feature not one but two couples who found love while working together on their respective Strictly series. I can't wait to see them perform together again. Nothing says Christmas like a little bit of ballroom romance, am I right?

So, to get yourself in the Christmas spirit, why not enjoy a first look at this year's yuletide contestants. Enjoy.

TV and radio presenter Debbie McGee will return to the Strictly Come Dancing arena following her 2017 appearance on the hit show. As the Radio Times reports, McGee will be joined in the Christmas special by professional dancer Kevin Clifton — who is most likely still reeling from his 2018 win with partner Stacey Dooley.

Another 2017 celebrity to give the competition another go is soap actor Gemma Atkinson, who will again be paired with husband Gorka Marquez. The couple met during Atkinson's first stint on the BBC show, and here's hoping they'll be able to produce the same magic on the dance-floor this time around.

Youtuber Joe Sugg will make his return to the Strictly ballroom just a year after first appearing on the main series. According to the Radio Times, Sugg will strut his stuff on the festive special alongside now-girlfriend Dianne Buswell, who he first met during his time on the 2018 season.

Now, no Strictly Come Dancing contestant wants to endure the pain of being sent home first, and sadly for Holby City star Chizzy Akudolu, that was indeed the case. However, the actor is back for the 2019 Christmas special, and fingers crossed she'll have more luck on the dance-floor this time.

One of the favourites to emerge from the 2014 edition of Strictly was the former-TOWIE star, Mark Wright. Upon his return to the famous ballroom, Wright will be dancing alongside partner Janette Manrara, and we'll just have to wait and see if the reality star is able to wow the judges once again.

Good Morning Britain's Richard Arnold first appeared on the BBC competition series back in 2012, and with professional partner Luba Mushtuk in tow for the latest Christmas special, Arnold will no doubt be hoping to smash his previous record.

The Strictly Come Dancing Christmas Special airs on Christmas Day on BBC One.

More like this
Twitter Can’t Make Up Its Mind About Ekin-Su’s 'Dancing On Ice' Skate-Off
By Sophie McEvoy
Twitter Is Saying The Same Thing About Ekin-Su’s 'Dancing On Ice' Debut
By Sophie McEvoy
You’ve Got 'Love Island’s Farmer Will All Wrong
By Jack Orenstein
This Pre-'Love Island' Video Of Olivia & Zara Together Changes Everything
By Bustle UK
Get The Very Best Of Bustle/UK
Sign up for Bustle UK's twice-weekly newsletter, featuring the latest must-watch TV, moving personal stories, and expert advice on the hottest viral buys.