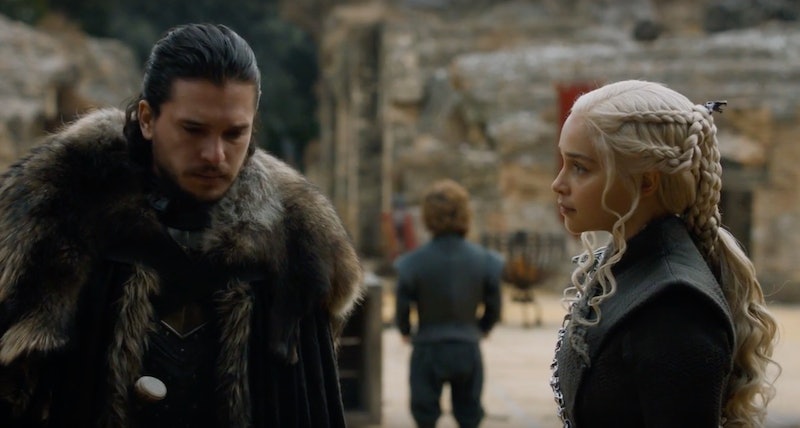 Almost seven years ago, Game of Thrones premiered, and in 2019, the series will sadly conclude with Season 8. The show has shaken up the television scene, and even though its final season is fast approaching, viewers still have a ton of questions about what's to come. Perhaps the most dreaded topic is who will die in Game of Thrones Season 8. After all, with episodes like ""The Rains of Castamere" (aka The Red Wedding) and "Battle of The Bastards," fans have learned that no one is safe and the writers are always down for a gory time.

If you've seen any episode of Game of Thrones, you know that fighting and killing comes with the territory. One of the central storylines revolves around major families of power wanting control of the Iron Throne. Many fan favorites have died, with Ned Stark's beheading and Catelyn and Robb Stark's slaughter during the infamous Red Wedding particularly tragic. Game of Thrones is, really, a game of death, and nobody is safe.

But just how many characters will bite the dust in Season 8? There are no definite answers just yet, but these are some of the people who will probably meet their maker in the final season.

Theon Greyjoy has had a tough go at life. He's been a hostage to Ramsay Bolton, who did a whole bunch of unthinkable things to him. He's been beaten, brainwashed, and now barely has any resolve. But he knows he has a duty to his sister, Yara, who is twice the leader he is. So he's currently sailing to rescue her from their uncle, Euron, who is pledged to House Lannister (Yara and Theon are pledged to House Targaryen).

Theon has lived through so much that he feels he has to redeem himself. He couldn't save Yara when she was captured, he betrayed the Starks, and he's been made to feel like scum by Ramsay. Sacrificing himself to save Yara, or possible Sansa or Arya, will not only give him peace, but also prove to everyone he's not trash.

In a very poetic way, Ser Jorah's death would be beautiful. For years now, he has been trying to make up with Daenerys because 1) he betrayed her early on in their friendship/work-relationship and 2) because he is in love with her. And ever since Jon Snow strolled onto the scene, you can just tell Jorah knows he's already lost Dany's heart. Again.

If Jorah were to die, it would leave a lasting mark on Dany. She has been known to let her heat-of-the-moment decisions lead the way, so if she's mourning someone like Jorah, what will she do? His death would also be especially sad since he was just saved from Greyscale, an otherwise incurable disease.

The brothers also have an immense hatred for one another, and so now that they are on opposite sides, the chance to fight (to the death) is undoubtedly coming soon.

There are so many prophecies in Game of Thrones that it's hard to keep track of them all. One important one, however, involves Cersei Lannister. It was given to her when she was a child and said that she'd be dethroned by a younger queen and that her three kids would all die one day. The last part of the prophecy said that Cersei would be strangled to death by her "valonqar" which in High Valyrian means "little brother."

So currently she's two for three, which also backs the theory that she's not really pregnant again (Maggy the Frog said she'd only have three kids). Prophecies aren't jokes in any fictional tale, especially not Game of Thrones. Cersei is at the highest risk to die, and either of her brothers could kill her. Tyrion hates her and Jaime feels threatened after Cersei said she'd have The Mountain kill him for leaving her.

Jaime Lannister is known for being at Cersei's every beck and call. He loves her even though she's a maniacal leader (and also despite the fact that they're siblings). At the end of Season 7, Jaime is tempted to leave Cersei's side because she wants to sit back while Daenerys' and Jon's armies fight the army of the dead. But despite that, Jaime won't have the guts to kill his sister, even though many would argue he should to carry out the "valonqar" prophecy.

However, Cersei is at the tip top of Arya's list of people she wants to kill, and while Jaime isn't, he's the easiest face to get Arya close to the queen. Oh, the sweet revenge that would come with Cersei being at Arya's feet when the Stark girl takes off Jaime's face and reveals her own before she strangles the queen.

Seeing Daenerys' dragon babies go into battle is one of the hardest things to deal with. When Viserion fell into the cold, dark waters, a part of our hearts died along with him. So if any other dragon gets hurt or killed next season, rioting may take place among GoT fans.

Drogon seems like the least likely to die since he's the biggest and most vicious among the three dragons. However, he is named after Khal Drogo, Daenerys' first husband and love, so is this a foreshadowing of Drogon's ultimate demise? This may be the hardest, most shocking death to take, but with Cersei on the hunt to kill Dany's children, it seems like an unfortunate possibility.

One last prophecy revolves around Azor Ahai, or the Prince That Was Promised, a savior figure who comes back to stop the world from ending. Missandei told Daenerys that the actual translation doesn't have a gender, so it could be either a prince or princess. This puts both Jon and Daenerys in the running to be the savior of Westeros, but what does that mean for the one that isn't?

While the prophecy isn't Harry Potter-like, where if one lives the other shall die, it also would be great storytelling to kill one character off while one remains. This would be the ultimate heartbreak, considering both Dany and Jon are fan favorites and they have really strong feelings for one another (and a possible baby on the horizon).

In the original prophecy, Azor Ahai kills his wife (Nissa Nissa) and turns her into a corpse. If the two Targaryens take on these roles, Dany may find herself as the new Nissa Nissa, with Jon "thrusting his dragonsteel blade" through her heart. What a perfect Greek tragedy that'd be.