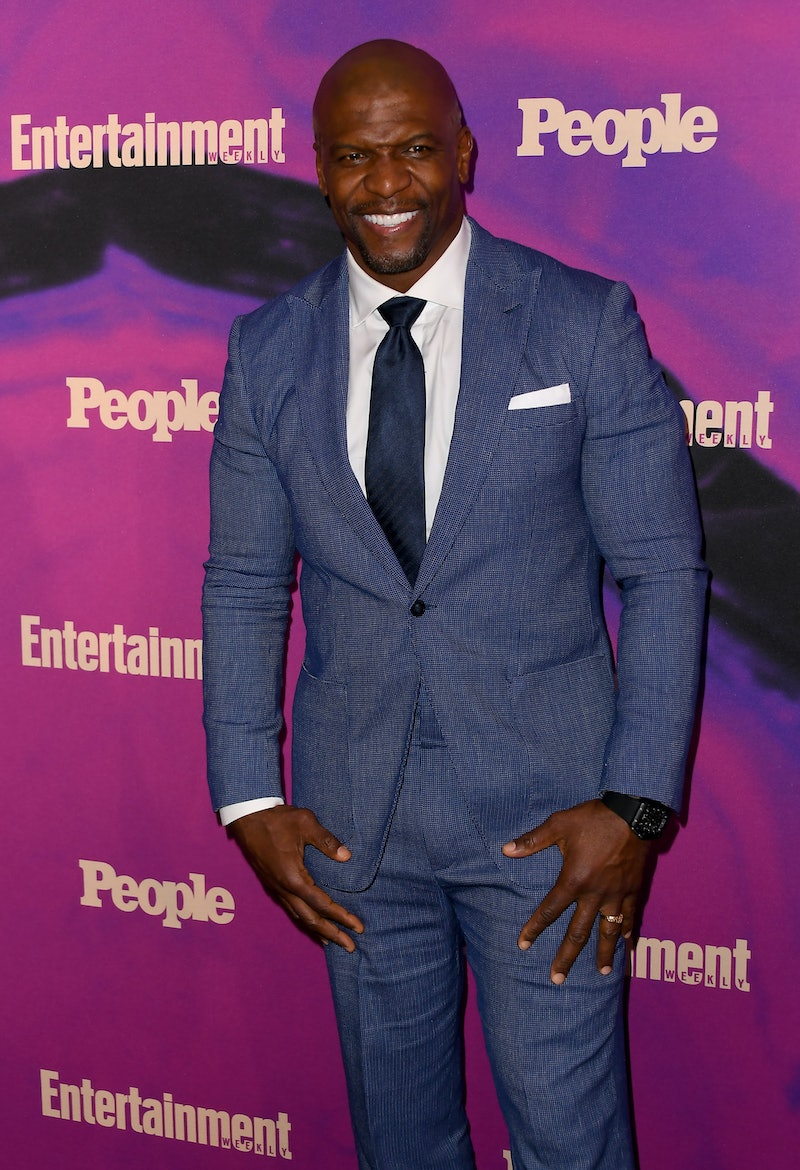 Ever since it was revealed that Halle Bailey would play Ariel in Disney's upcoming live-action adaptation of The Little Mermaid, the Internet has been abuzz speculating about who will take on the roles of Ursula, King Triton, Prince Eric, and all of the classic characters. Now, fans can add another name to the ever-growing list of potential cast members. Terry Crews wants to play King Triton in The Little Mermaid, and is putting on a full-blown Twitter campaign in an attempt to win the part.

The America's Got Talent host and Brooklyn Nine-Nine star began his campaign last weekend, on Saturday, July 6, when he tweeted a hilarious photo of himself under the sea, with his head and torso Photoshopped over King Triton's merman tail from the original animated Little Mermaid. Crews captioned the photo, "“Ariel’s Dad!!!!”, giving fans (and film producers) an idea of what he would look like as a live action King Triton.

He then joked that he would be perfect for the role because of his gym routine in a follow-up tweet, saying, “Good thing I skip leg day because mermen don’t have legs!” If this doesn't convince Disney that he deserves the part, I'm not sure what will.

The immediate reaction to Crews' tweets shows that his campaign is backed by many fans, with his original tweet racking up over 118,000 likes, 25,000 retweets, and many hilarious responses in support of the potential casting. One fan, @TheReal_Ikrani, responded to the actor, "YES. PLEASE. I don't care how much sense it doesn't make, DO IT," while another user, @evanskaufman, had one condition before jumping on board: "Well okay, but only if there's a scene where he beats up Ursula using nothing but his pecs," they said, referring to Crews' signature flex. It's a strange request, but it would make for unique entertainment.

Crews continued his campaign on Tuesday, July 9, by reposting fan art from @BossLogic depicting him as a more realistic and slightly daunting version of King Triton. “IF YALL RETWEET IT ENOUGH MAYBE IT’LL HAPPEN! KING TRITON!," he tweeted, along with several mermaid emojis and the hashtags #TerryForTriton and #MermanLife, which we assume are his new campaign slogans.

And in case those visuals weren't enough to land him the part, Crews also auditioned in a more traditional way, posting a video of him singing "Under the Sea"... sort of. In the video shared Tuesday evening, he changed the words to brag about his King Triton impression and his infamous pecs, and to plug the new episode of America's Got Talent, but still, it's effective.

Although Crews would be both frightening and funny as King Triton, fans are also putting their own suggestions in the ring. Some social media users have said that Jason Momoa or Dwayne "The Rock" Johnson should take on the role, but the most popular suggestion seems to be Idris Elba, who many have been demanding to play the iconic character since the announcement of Bailey's casting.

While neither Crews nor Elba have been officially rumored to be contenders for the role, Disney couldn't go wrong either way.