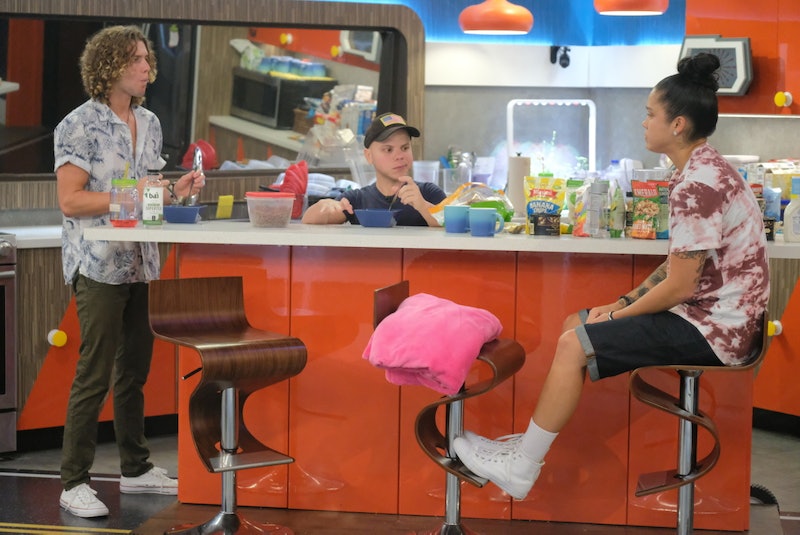 Spoilers ahead for the Big Brother 20 finale. After a season of increasingly shocking twists — including a surprise engagement — Big Brother ended with an unexpected loss for Tyler, who had been the frontrunner since the first week of the game. But while he may have lost the chance to call himself a BB winner, Tyler was voted America's Favorite Player for BB20. And that's a welcome consolation prize for one of the show's most memorable players of all time.

While those going into the finale only have a one-third chance of nabbing BB's biggest title, America's Favorite Player — which comes with a $25,000 prize — is anyone's game. Fans have been voting to pick a winner for the past week, and while many may have guessed that Tyler would be taking home the grand prize — making him ineligible for AFH — people still voted for the self-proclaimed lifeguard enough to ensure that he beat out runner-ups Haleigh and Brett. Between his runner-up prize and AFH, Tyler is coming away with $75,000 — which is far less than the half-million dollar prize that the Big Brother winner takes home, but certainly nothing to sneeze at.

For better or worse, Big Brother 20 was filled with some of the series most memorable houseguests, making AFH anybody's award to win. One contender was early fan favorite and life-coach Kaitlyn, who claimed she could solve the problems of others but was then sent home when she couldn't solve a puzzle shaped like herself. Another likely candidate was Sam, who started the season with a big punishment, and whose personality fluctuated from quirky to downright threatening. Eventually, the runner-ups to the award narrowed down to Haleigh and Brett, who both attempted to make some major moves in the house only to be outplayed by Tyler and Kaycee.

More shocking than the fact that Tyler won AFH and not the final Big Brother prize, though, is that the 23-year-old Ohio native breaks the standard mold for who is awarded America's Favorite Houseguest. On Big Brother Season 19, Cody Nickson may have been hated by his fellow houseguests, but his underdog status and tell-it-like-it-is attitude eventually led him to the title of AFH — which makes him similar to fellow underdog Haleigh. Light-hearted jokesters Victor Arroyo of Big Brother Season 18 and James Huling of Big Brother 17 took home AFH for their seasons, aligning them firmly with Brett, and the kind and gentle Donny Thompson — who was essentially the Sam of his season — was awarded the prize for BB16. Runner-up masterminds like Tyler — a class which would include fellow runner-ups Paul Abrahamian from BB18 and BB19 and Vanessa Rousso from BB17 — usually just have to settle for the second place prize. And while he may not have been able to take home the final win of the season, there's no denying that BB20 will be remembered as Tyler's season of Big Brother, and his AFH win is a fitting tribute to that fact.