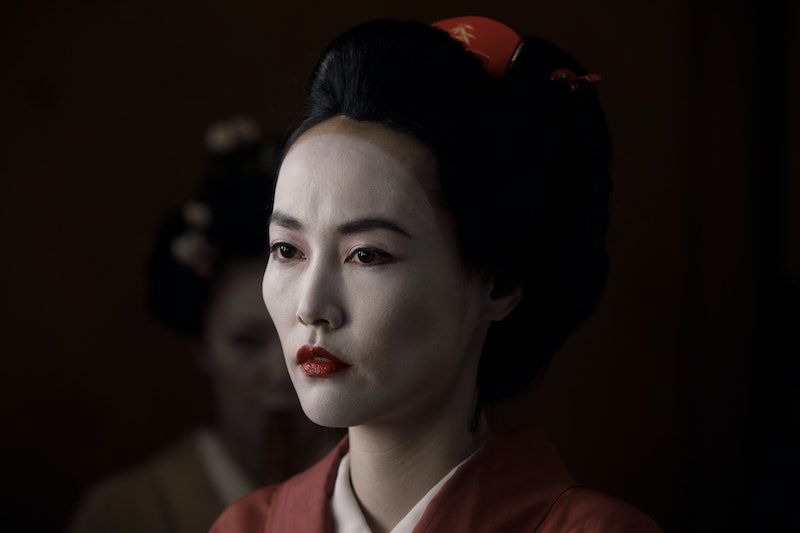 After much anticipation, Westworld is finally traveling to Delos' version of feudal Japan. The fifth episode of Season 2, airing May 20, will take place in Shogun World, and Maeve and her not-so-merry band of travelers will meet new Westworld character Akane (Rinko Kikuchi). The episode title is "Akane No Mai," so this new arrival has to be of significance.

Akane first appeared in the trailer for Westworld Season 2 and that brief glimpse of her performing with her face painted white seemed to indicate that she's a geisha. And from additional previews, it appears that she and Maeve will share a fascinating connection.

When Entertainment Weekly shared the photos for the May 20 episode, the publication confirmed that Akane is, in fact, a geisha. Yet, while Western culture often incorrectly associates geishas with sex workers, Merriam Webster notes that geishas didn't always have sexual relationships with their clients. Instead, their primary role was to entertain men through singing, dancing, playing the instrument the samisen, and conversing. Still, if the human guests who visit Shogun World are anything like the human guests who visit Westworld, then there will certainly be sexual expectations when it comes to the geisha hosts.

But the far more interesting connection between Maeve and Akane is teased in the above preview for "Akane No Mai." Akane says in Japanese that she was plagued by a voice. She continues, "It said, 'This is a new world ..." and before she finishes, Maeve cuts in and says (also in Japanese), "And in this world, you can be whatever you want to be."

Maeve is able to finish Akane's sentence because it's exactly what she used to say to human guests at the brothel. In the second episode of Season 1, "Chestnut," Maeve is malfunctioning and her backstory is no longer working to seduce the guests. The speech she would deliver to the guests had some variations, but overall, it went like this:

"You can hear it, can't you? That little voice. The one that's telling you, 'Don't. Don't stare too long. Don't touch. Don't do anything you might regret.' I used to be the same. Whenever I wanted something, I could hear that voice telling me to stop. To be careful. To leave most of my life unlived. You know the only place that voice left me alone? In my dreams. I was free. I could be as good, or as bad, as I felt like being. And if I wanted something, I could just reach out and take it. But then I would wake up, and the voice would start all over again. So I ran away, crossed the shining sea. And when I finally set foot back on solid ground, the first thing I heard was that goddamn voice. Do you know what it said? It said, 'This is the new world. And in this world, you can be whoever the f*ck you want.'"

Based on their shared dialogue, it seems the Narrative Department uses storylines across parks and Akane is Maeve's Shogun counterpart. And since Maeve has the head of the Narrative Department with her, Lee should be able to confirm this information. Since Akane is a kindred spirit, Maeve may want to help awaken her to the truth about their existence — as long as Maeve, Lee, Hector, Armistice, Felix, and Sylvester can escape the samurai warriors unharmed.

Another possible way their stories are linked comes from the episode title. EW reported that "Akane No Mai" translates to "Akane's dance." But according to Google Translate, "no mai" means "overseas." In Maeve's speech, she talks about crossing the "shining sea." While that's most likely included to explain her British accent in the American-themed Westworld, perhaps there's something to this idea of crossing the sea that will bring Akane and Maeve even closer together.

As for the Japanese actor who portrays Akane, American audiences may be familiar with Kikuchi because of her roles in Pacific Rim and Babel. She received an Academy Award nomination for Best Supporting Actress for the latter. So no matter how Akane and Maeve are bound together, the scenes between Kikuchi and Thandie Newton should be electric. And hopefully, through their conversations, Maeve can convince Akane to become another host to join her resistance.