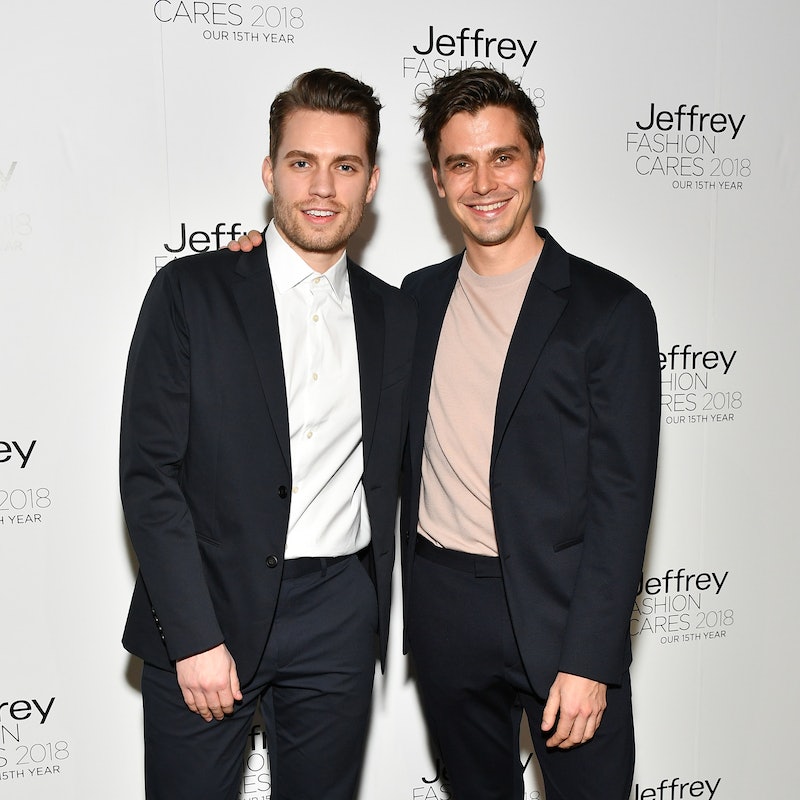 The second season of Queer Eye premiering on June 15, and the world is already smitten with the show's soft-spoken food-and-wine expert Antoni. But his heart is taken. Antoni Porowski is in a long-term relationship with Joey Krietemeyer. And while Krietemeyer isn't a member of the Fab Five, he's pretty fabulous himself. According to his Instagram bio, Krietemeyer is the director of creative services at 1stdibs — a luxury marketplace of vintage design pieces. And beyond his own career, Krietemeyer appears to be super supportive of his boyfriend as he achieves fame on Queer Eye.

In a February 2018 interview with Vulture after the first season of the Queer Eye reboot premiered, Porowski said that he has been with Krietemeyer for seven years. When talking about the attention he received on the internet for his looks, Antoni called himself "basically married." Porowski told Vulture, "There's been a lot of attention and objectification, which I didn't think, as a 33-year-old basically married male, would be the case, but it has been."

This pair has had to adjust to Antoni's new high-profile career, but their commitment shines through in interviews. For instance, Porowski referred to his boyfriend a multitude of times in his Vulture interview, noting how Krietemeyer keeps up with what people are saying about him on social media. The Queer Eye star also said that he's close to Krietemeyer's mother, and in a Refinery29 interview, Porowski disclosed that he cooks Sunday dinner for Krietemeyer and Krietemeyer's parents.

Porowski also mentioned their studio apartment to Vulture, which is evidence enough that these two really like each other. Houzz featured their house in 2015, and their 600 square-foot studio apartment in Brooklyn is definitely intimate. But knowing Krietemeyer's career, it should come as no surprise that he and Porowski have built a beautiful home together. Krietemeyer actually made some of their impressive home decor. "Growing up, I used to watch my dad in his workshop creating different pieces for our old house," Krietemeyer told Houzz. "Now that I'm an adult, it's been incredible to work with him on these kinds of projects. They act as such wonderful reminders of the memories we've shared, and I get to appreciate them whenever I'm at home."

Even with the success of the first season of Queer Eye, they were still living in their studio as of March 2018 when Apartment Therapy highlighted their space. Krietemeyer spoke to Apartment Therapy about how his job at 1stdibs influenced their home. "To be honest, I actually didn't have much of an interest in interior design or decorating until I started working there. I studied graphic design in school and have a great passion for color, typography, and composition, but exploring the 1stdibs marketplace has opened my eyes to the world of interiors and iconic furniture designers," Krietemeyer said. "You can't stare at these beautiful items all day and not appreciate their rarity and the intelligence behind every piece's design... it's absolutely fascinating." Sounds like design expert Bobby Berk would approve.

The one downside to the couple's small space is that Porowski can't fulfill his dream of getting a dog. He told The New York Times that he wants a corgi, but Krietemeyer has put dog-owning on hold. "As Joey pointed out, in this small of an apartment, we can't have an extra beating heart," he said. Antoni has made his love of corgis extremely clear on social media and he even told U.K.'s The Sunday Times that a fan on Instagram tricked him into viewing an inappropriate photo by saying it was of a corgi puppy. Krietemeyer teases Porowski about his corgi love since on Instagram, once calling his boyfriend a #corgicreep in the comments of one post.

Antoni responded, "Enablers slash photo takers shouldn't comment" with a heart emoji. And even a former Fab Fiver got into the discussion. The original food guru of Queer Eye, Ted Allen, wrote, "Why dont you just get it over with and get your own damned dog?" As The New York Times reported, Ted was a mentor to Antoni and helped connect him to the Queer Eye gig.

Beyond Ted, it seems that Krietemeyer is also friends with the current Fab Fivers. In particular, the couple appears close with Jonathan Van Ness and Tan France. For example, Van Ness lovingly yelled at Krietemeyer for not including him in an Instagram photo. And France, Porowski, and Krietemeyer attended the Jeffrey Fashion Cares charity fashion show in April and met Tina Fey together a month later.

The Queer Eye schedule does mean that the couple spends more time apart now. But Porowski told GQ, "Joey, my boyfriend, would come down and visit and be part of the weird bubble world," when he was filming Season 1 in Atlanta. And Porowski, who was an actor, has Krietemeyer to thank for inspiring him to make food his career. He told Grub Street, "I have two people in my life — my best friend, P.J., and my boyfriend, Joey — who have always told me that I should pursue food in a more professional capacity." Krietemeyer supports Porowski through social media too. When the cast of the Queer Eye reboot was announced, Krietemeyer wrote on Instagram, "So extremely proud and excited for you @antoni!! I love you and can't wait for the world to experience you the way I'm able to every day."

Despite the adorable photos they have shared on Instagram, they aren't big social media posters (Krietemeyer has only tweeted three times). In The Sunday Times interview, Porowski said that both he and Krietemeyer are introverts, who find fame "overwhelming." But while the food expert might not be as open about his private life as other members of the Fab Five, it's clear that Krietemeyer and Porowski are partners in life.