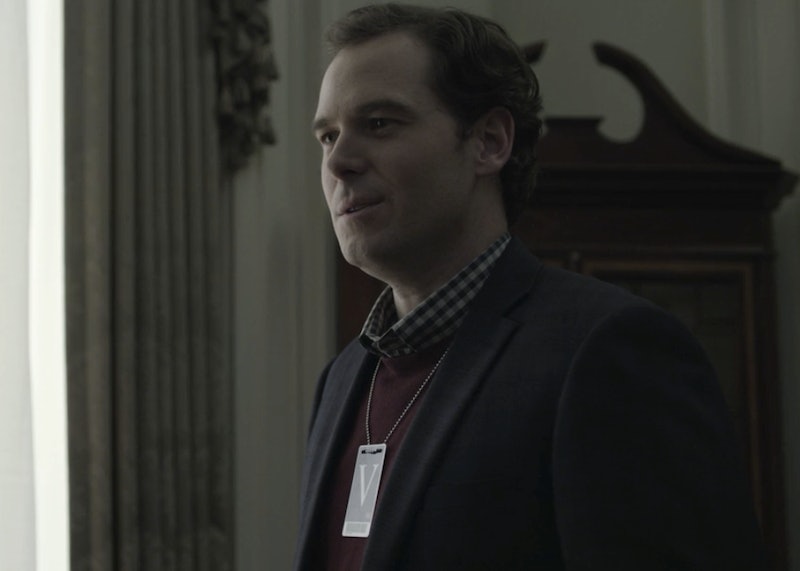 House Of Cards is all about projecting an ideal version of yourself on the world while hiding who you really are. Frank Underwood may be an evil mastermind, but he wouldn't dare reveal that to the larger public. With so many two-faced personalities working in Washington, it's odd that it took five seasons for someone who works as an actor to play a major role in the series. Eric Rawlings makes his way to the White House in Season 5, and it seems that he's a familiar face to Frank Underwood. Who's Eric Rawlings and when has he turned up before on House Of Cards? (Spoilers for House Of Cards Season 5!)

Eric last appeared all the way back in Season 2, where he portrayed Frank Underwood's great-great-great grandfather Augustus Underwood during a Civil War reenactment. Frank took to the opportunity to "speak" to his ancestor, and the two exchanged words (with Eric in-character) before Frank continued his ascension to the Presidency. In the many years since Frank's visit, a lot has changed, but it seems that Frank has kept Eric in mind long enough to eventually invite him to the White House. What isn't clear at first is what Eric's purpose there is or why he's been invited to share a room with the President.

Eric's return to House of Cards seems to be at Frank's request. At the peak of Frank's unpopularity, it seems that Eric is just about the only person left who truly believes that the man could make a great president — and he's not wrong. Frank may be committing acts of violence and using terror to hold onto America by its neck, but if you subscribe to a "means justify the ends" philosophy of living then you could argue that he's still capable of changing the country for the better.

Eric never openly states why he thinks Frank Underwood could be a good president, so the audience is left to guess as to whether it's naiveté or a bleak worldview. While Eric and Frank's first encounter is primarily professional, they get closer over his visits. Over talking about the world and laughing about how Eric actually made up all of Augustus' backstory, the two become fast friends (a rare occurrence for the usually friendless Frank). Then things pick up quickly, getting very intimate and a little bit scary.

After having seen Frank a few times, Eric goes to comfort him and tries to engage him in a sexual manner. Frank is taken aback at first, getting ahold of Eric's neck and giving one of his famous, menacing speeches. Then he hooks up with him anyway.

Frank's sexuality has always been an illusive beast and is exercised more often in the name of power rather than pleasure. Will Eric be the one to find the person hiding underneath the monster that Frank has turned himself into? And, perhaps more importantly, is it weird that he's having sex with a man who has pretended to be his grandfather?