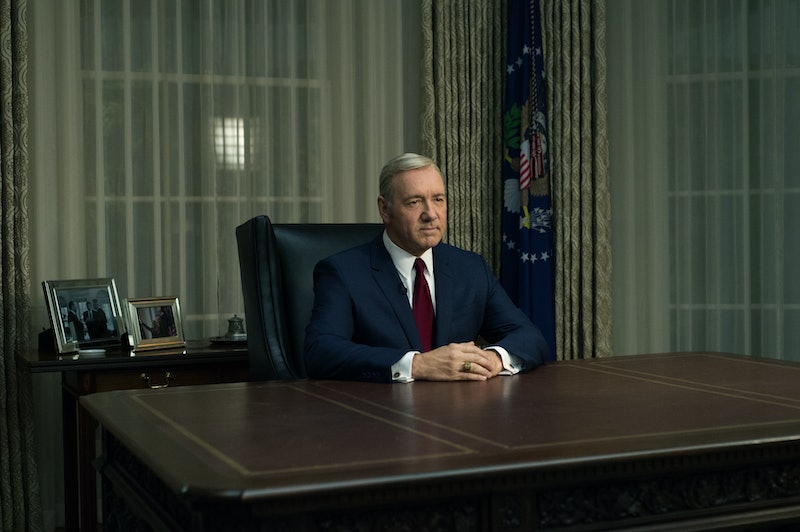 While you can't go a single day without hearing what President Donald Trump is up to, you might not be as up-to-date with what Frank Underwood did on House of Cards Season 4. With Season 5 of House of Cards premiering on May 30, Frank in all of his despicableness will be back to distract you from all of the despicableness occurring in real-life U.S. politics. To make sure you're all set before marathoning the next 13 episodes of the Netflix series, here's what you need to know about Frank in Season 4 of House of Cards.

The fourth season started with Frank at odds with Claire after she left in Season 3 because he destroyed her political ambitions. Well, his desire to stamp out Claire's pursuit for power continued in Season 4 when he put an early end to her attempts at running for Congress. After telling Claire he would not sabotage her campaign, he used his State Of The Union address to get back at her for daring to want some power of her own by announcing his support of Celia Jones for the Congressional seat that Claire was vying for. Yep, that meant that Frank was just as frosty as ever at the beginning of Season 4.

Claire exacted her own revenge by causing Frank to lose the South Carolina primary and his campaign for the presidency appeared to be in bad shape. And things went from bad to worse for Frank since while he spoke to protestors at a campaign rally. He was shot by Lucas Goodwin, who knew the truth about Frank killing Zoe Barnes. Frank survived the gunshot, but was in critical condition in the hospital and in need of a liver transplant, which he received.

While Frank was awaiting his transplant and out of commission as the president and, Kevin Spacey was still a big part of the show, thanks to the hallucinations that President Underwood was experiencing. These hallucinations included a vivid and violent depiction of the people he had murdered — Zoe Barnes and Peter Russo.

After his brush with death, Frank asked Claire to stay with him. Since he said that he's nothing without her and promised to work together — and seemed to genuinely mean it — she agreed to come back, and the Underwoods were a united force once again. He also approved of Claire's sexual relationship with writer Tom Yates later in the season.

Lucas shooting Frank led to Heather Dunbar dropping out of the Democratic primary, which led to Frank being the last candidate standing. This meant he could focus on winning the actual election and not just the primary. The next step was scheming to get Claire on the ticket as his vice president. Knowing that the Democrats would balk at the idea if he was the one to suggest it, the Underwoods came up with an elaborate plan to position Claire to take on the role. He not only convinced his current vice president, Donald Blythe, to back out, he also declared that the Democratic National Convention would be an open nomination. That put his own presidential prospects in jeopardy, but the gamble paid off since Claire was chosen to be his running mate.

Along with manipulating situations to get Claire as his VP, Frank was using domestic surveillance to help win the election. New character Aidan Macallan was brought in by LeAnn Harvey (another new character) to mine data to give the Underwoods an unfair advantage. Yet, the FBI took over this surveillance at the end of the season and so what Aidan — and the Underwoods — were doing may be revealed in Season 5.

The reason Frank was able to use surveillance was because America was under the threat of terrorism. ICO — the equivalent of ISIS on House of Cards — was planning attacks on the U.S., which allowed Frank's competition in the presidential campaign, Governor Will Conway, to become more involved in a hands-on way. The Republican candidate is a veteran and after he accused Frank of not being tough on terror, Frank invited Conway to discuss the ICO situation.

Both men used the threat of terror to play political games, but Season 4 ended with Frank and Claire's master stroke. After the Miller family was taken hostage by ICO, Frank worked with Will to attempt to save them. Yet simultaneously, journalist Tom Hammerschmidt printed a story about the accusations that Lucas Goodwin had made. Frank lost many co-conspirators and allies in Season 4, including Remy, Jackie, and even Freddy, and Hammerschmidt was able to take advantage of that by getting intel on the crimes that Frank has committed.

After Frank refused to give Tom an official comment, he published the story anyway. In order to bury it, the Underwoods knew that they needed to do something drastic. Claire came up with the idea to use fear to distract U.S. citizens from this bombshell of a story. Frank declared war on ICO, which subsequently led to the death of hostage James Miller.

By the end of Season 4, Frank had a renewed sense of purpose, thanks to having Claire by his side again. As the final moment showed him sharing his fourth-wall-breaking antics with Claire, these two will be more united and ruthless than ever in Season 5. So while avoiding your daily dose of Trump news, you can see what Frank does next as the latest season of House of Cards streams on Netflix.