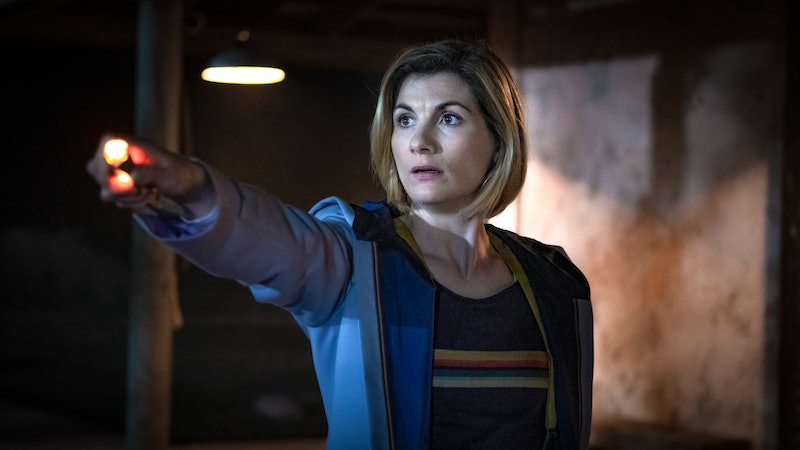 Christmas and New Year are just around the corner and while we plan ahead for the big days, it's essential think about the entertainment prospects. TV shows and movies around this time always provide top quality content, enough to diffuse any post-Monopoly family argument. This year, the BBC is providing a Doctor Who on New Year's Day rather than its semi-regular Christmas spot, but the question is who's in the cast for the 2019 Doctor Who BBC New Year's Special?

Yes, you heard me right. It looks like we might not be able to catch up with the Time Lord this Christmas because, as Bustle has previously reported, this year we won't be getting a festive episode. But have no fear, because a special episode will air on New Years Day, and will mark the beginning of season 12. What a way to kick off 2020.

Called Spyfall, the first episode is billed as "a blockbuster action packed two-part episode." The second part will air less than a week after the first, on Sunday Jan. 5.

So, what about the cast then? Well, you can expect all your faves to be present and accounted for. Jodie Whittaker (the 13th Doctor) will be joined by Tosin Cole (Ryan), Mandip Gill (Yaz) and Bradley Walsh (Graham) in Spyfall.

On top of that, it has been revealed that two television heroes, Sir Lenny Henry and Stephen Fry, will be making appearances in episode one of season 12. First-look videos of both Fry and Henry have been released, and it looks like we have a lot to look forward to.

Fry and Henry both seem as excited as we are about their slots on the show. "Short of being picked for a British space exploration ... being in an episode of Doctor Who will certainly do as a very sweet second-place excitement," Fry said, with Henry adding "as a life-long (hiding behind the sofa type) Doctor Who fan this is a very special moment for me."

Actors Goran Višnjić and Robert Glenister are also confirmed for season 12, but no word yet on whether they're appearing in Spyfall. Bustle has reached out to the BBC to ask for further info, and I'll update you when we hear anything.

More like this
'The Last Of Us' Has Officially Been Renewed For Season 2
By Darshita Goyal
Everything To Know About The 'Daisy Jones & The Six' TV Series
By Maxine Harrison and Brad Witter
'The Traitors' Is Officially Being Turned Into A Board Game
By El Hunt
Turns Out George Clooney Is A Huge Fan Of This Classic British Game Show
By El Hunt
Get The Very Best Of Bustle/UK
Sign up for Bustle UK's twice-weekly newsletter, featuring the latest must-watch TV, moving personal stories, and expert advice on the hottest viral buys.