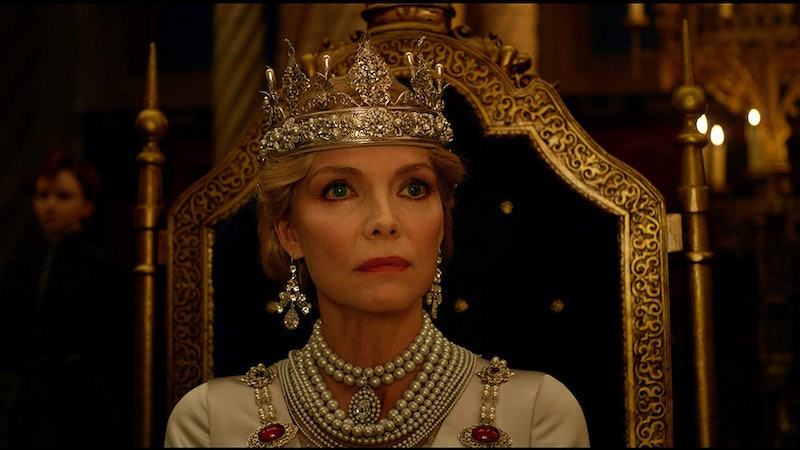 In 2014's Maleficent, audiences saw a different side to the seemingly sinister witch from the animated 1959 film, Sleeping Beauty. The live-action prequel shows that Maleficent (Angelina Jolie) actually cared for Aurora (Elle Fanning) as if she were her own daughter, and they formed a bond. In the sequel, Maleficent: Mistress of Evil (out Oct. 18), Aurora is about to marry into Prince Phillip's (Harris Dickinson) family and another maternal figure steps in to threaten Maleficent and Aurora's relationship. Michelle Pfeiffer plays Queen Ingrith, the antagonistic mother-in-law who goes to war against the sharp-cheekboned antihero.

In the trailer for the film, Queen Ingrith (who isn't adapted from another existing Disney property) isn't necessarily presented as a totally evil character — although her angelic face and white gowns may hide a deceitful heart. The queen is a protective mother to Prince Phillip and powerful as the Queen of Ulstead, a neighboring kingdom. After Aurora accepts Phillip's proposal, Ingrith welcomes both her soon-to-be daughter-in-law and Aurora's godmother Maleficent to their castle. However, she treats the latter with some condescension and passive-aggression. "You have done an admirable job going against your nature to raise this child," Ingrith says. "But now, she will finally get the love of a real mother. Tonight, I consider Aurora my own."

This sends Maleficent on a rampage during which she announces that she is totally against the marriage. And when she demands that Aurora come home with her, the young Queen of the Moors refuses and chooses to stay. The family tiff escalates into an epic battle involving humans and mythical creatures, with Queen Ingrith as the commander to her kingdom's soldiers. The war brings out Ingrith's true colors as she dons shining armor and picks up a crossbow — ready to shoot anyone and anything that gets in her way.

"Phillip's been wanting to marry Aurora for a long time, and now I've figured out a way to make this all work towards my master plan," Pfeiffer told Disney twenty-three magazine, per Digital Spy. "[Queen Ingrith's] sole purpose is to protect her people, and for her, the ends justify the means." The actor also mentioned an engineer character named Gerda, played by Jenn Murray, as having a key role in Ingrith's quest for power. "She's psychotic, with this still, cold exterior that gives the sense that she has no conscience whatsoever," Pfeiffer continued. "The perfect executor of my evil plan for all dominance."

But while Queen Ingrith claims that her motivation is to protect Aurora and her people, there may be more personal grudges at stake — namely, the death of her brother, which she credits to the magical creatures Maleficent rules over. "She has a fear of the unknown," director Joachim Rønning told Disney twenty-three. "And that fear translates to aggression, with attack being her best defense." Phillip's mother isn't a character in the animated Disney movie, so everything about Ingrith qualifies as the unknown in canon.

Pfeiffer, meanwhile, was more than happy to take on a baddie. "This was an interesting part, and I was super excited to work with Elle [Fanning] and go toe-to-toe with Angelina [Jolie]. That was exciting," Pfeiffer told Flickering Myth at the D23 Expo red carpet. And she told Entertainment Tonight in a video interview, "I had a blast on this film. I'm pretty confident with the villains now."

It'll be a treat for fans to see two powerhouse actors battle it out onscreen, and it sounds like Ingrith and Maleficent are as well-matched as Pfeiffer and Jolie.

More like this
The 'Hocus Pocus' Sequel Finally Has A Release Date & It Makes Total Sense
By Shannon Barbour and Radhika Menon
Kimberly J. Brown & Daniel Kountz Looked Back On Their ‘Halloweentown’ Romance
By Stephanie Topacio Long
All The Sneaky Lindsay Lohan Movie Easter Eggs In Her New Ad, Explained
By Stephanie Topacio Long
Everything To Know About 'My Big Fat Greek Wedding 3'
By Grace Wehniainen
Get Even More From Bustle — Sign Up For The Newsletter