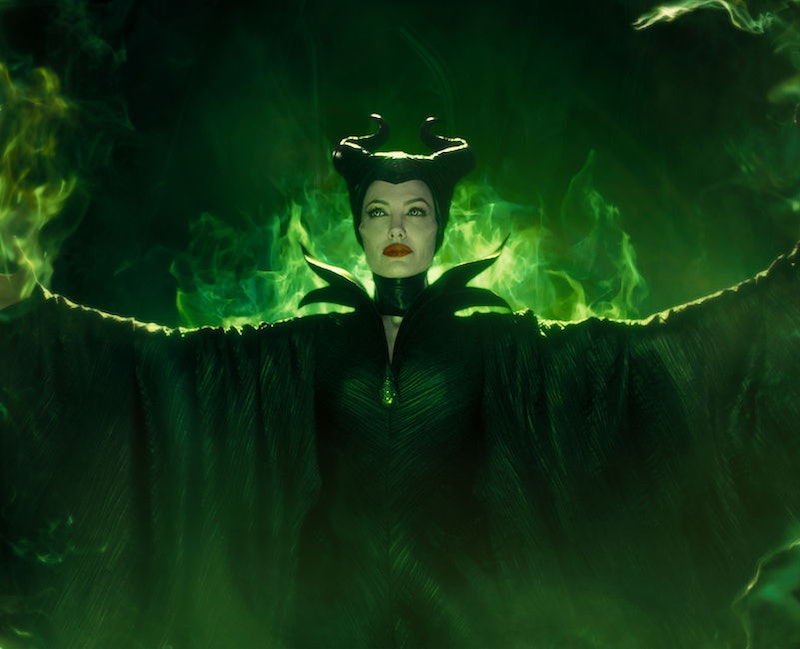 ICYMI, a sequel to Disney's 2014 smash success, Maleficent, is in the works. The sequel is currently undergoing development with the hope that Angelina Jolie will return to helm the live action feature as the fairytale's leading antihero. According to a June 15 report from TheWrap, "Linda Wolverton is in talks to return to write the screenplay...with the expectation that Angelina Jolie will reprise the title role in the live-action fairytale, though she does not have a deal in place." Although Hollywood has a wealth of supremely talented actresses who could take on the role of the complex sorceress, Jolie's poignant turn as Maleficent is one that we would love to see expounded upon in a sequel. As with the ABC series Once Upon A Time and the Broadway-turned-motion-picture, Into The Woods, there has been a trend in Hollywood of rebooting fairytales and — subsequently — upending the classic tropes that were classically attached to the stories' most popular characters. This could not have been more prevalent than in Maleficent.

In Disney's 1959 animated feature, Sleeping Beauty, Maleficent was an arguably two-dimensional antagonist. Like many other classic Disney villains, she used her powers as a vehicle for vitriol and maniacal destruction of Princess Aurora's happiness. In Maleficent, Disney peels back the layers of Maleficent's story, which is brilliantly showcased by Jolie's inimitable acting range. We see that Maleficent's villainy was spurred by heartbreak, betrayal, and a truly anguishing scene where Maleficent's wings are ripped off. The rebooted fairytale was also spun in a way — in the same vein as films like Frozen — to center on love that can exist between family rather than trumpeting the archaic staple of "love at first sight". When Maleficent unwittingly develops a maternal attachment to Aurora (Elle Fanning) — a girl she has cursed to fall into an endless sleep — we see Maleficent's kiss [Spoiler Alert] become the "true love's kiss" that awakens Aurora from her ill-fated slumber, rather than the one Prince Phillip plants on her.

There's no doubt that a sequel to the film could offer several story arcs that create more nuances to the fairytale's iconic characters. What plot lines will we see in Maleficent 2? I have a few ideas...

Ursula The Evil Sea Witch Will Show Up

Ursula from The Little Mermaid will show up and it will be revealed that she and Maleficent are apparently BFFs. We will also learn of Ursula's backstory and the fact that she isn't so bad after all.

Princess Aurora & Prince Phillip Will Date At A Reasonable Pace

Who needs "love at first sight" when you can establish a foundation of friendship and trust before becoming exclusive and whatnot?

The Dinosaurs From Jurassic World Will Show Up

Maleficent has shapeshifting abilities where she can turn into a gargantuan fire-breathing dragon. That is awesome all by itself, but why not up the ante by getting some of those glorious behemoths from Jurassic World to show up? One thing is for certain — I'd be making sure to see that epic battle in 3D.

These fairies were obviously very fond of each other, but — let's face it — they didn't exactly get along that well as roommates.

Assuming Jolie signs on for a sequel, I'm sure she'd love to have her hubby working alongside her. Plus, we already know the two have onscreen chemistry.

Aurora Will Discover She Has Magical Powers

Aurora will discover that she has magical powers, which will become extremely useful when she and Maleficent have to fight all those dinosaurs from Jurassic World.

Cinderella From Into The Woods Will Show Up

Do we even need an excuse to feature Anna Kendrick in anything? Cinderella will counsel Aurora on the importance of not getting caught up in infatuation.