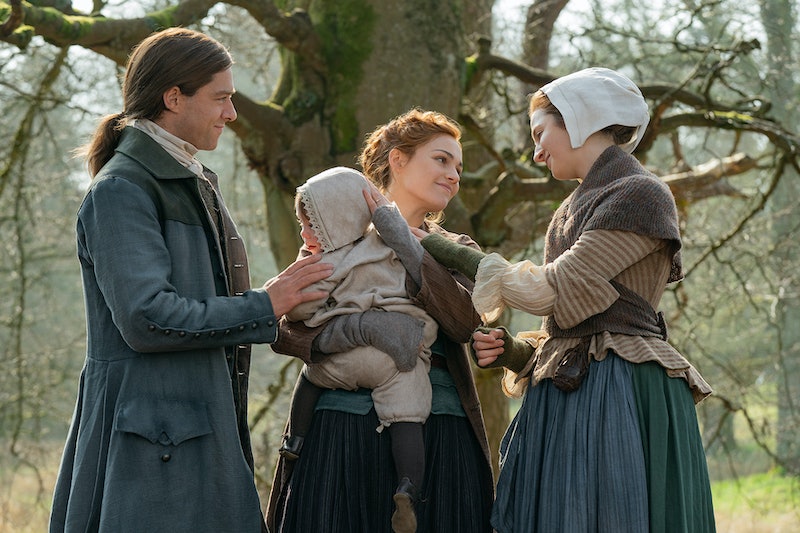 Spoilers ahead for Outlander Season 5. Though Brianna and Roger haven't directly encountered Stephen Bonnet for months, his presence continues to loom over Outlander — namely in regards to their son, Jemmy. Bree previously told Bonnet that Jemmy is his child in an act of mercy, but really, she has no way of being certain, and Roger has begun to question if he's Jemmy's biological father. The good news? If the show stays true to Diana Gabaldon's book series, the Fraser-McKenzie family will find out the truth... eventually.

Regardless of whose DNA Jemmy has, Roger is his father, much in the way that Frank was still Bree's dad. But the fact that Bonnet believes he's the biological father could put their family in danger. Bree's PTSD has been exacerbated knowing that Bonnet is still alive and potentially nearby, and Roger being upset about the lingering questions surrounding Jemmy's paternity has strained both their relationship and her emotional well-being. Fortunately, Roger put his pride aside fairly quickly thanks to a talk with Claire in the March 15 episode, because he and Bree are going to need to be a united front if they're to ever face Bonnet. Major book spoilers ahead.

In the books, Bonnet does return for Bree and Jemmy, and it leads to a violent showdown. On the plus side, the books also confirm that Jemmy is Roger's biological son. The reveal comes in the sixth book, A Breath of Snow and Ashes, by which time Jemmy is a bit older. When Jemmy gets lice, Jamie shaves his head as treatment, and Claire notices a brown mark above his hairline behind his left ear. Claire explains that children aren't often born with moles, which is why they've never seen the mark before. And Roger reassures Bree it's nothing to worry about; he has a mole just like it, also behind his left ear. While it goes unspoken, the family takes this to mean that Jemmy is Roger's son, as Claire says marks like these are often hereditary.

Gabaldon has also confirmed this herself. In the comments of a Facebook post she shared in September 2019, she replied to fans who were wondering about the mole. In one comment she wrote, "Jemmy's always thought Roger is his dad. Which he is." And in another, she was more direct: "Of course he's his biological father."

Because Outlander's fifth season is based on the fifth book, The Fiery Cross, not the sixth, any source of comfort the mole will provide won't happen for a long time, and they'll most likely have to face Bonnet without this certainty. But it will be a testament to how far Roger has come that he continues to raise Jemmy without knowing if he's his son.

More like this
Netflix Shut Down 'Bridgerton' S3 Rumours About A “Very Dark” Storyline
By Bustle
Bill & Frank’s 'The Last Of Us' Episode Has Twitter Emotionally Wrecked
By Alyssa Lapid
'RHOSLC' Star Jen Shah Refuses To Do A Post-Sentencing Interview With Andy Cohen
By Brad Witter and Jake Viswanath
'Happy Valley' Recreated This Moment From S1 In Its Penultimate Episode
By Sophie McEvoy
Get Even More From Bustle — Sign Up For The Newsletter
From hair trends to relationship advice, our daily newsletter has everything you need to sound like a person who’s on TikTok, even if you aren’t.