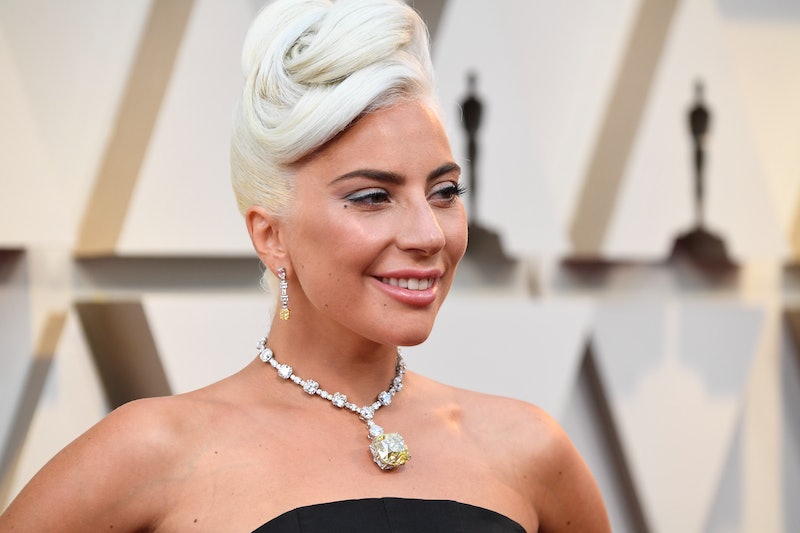 All eyes were on Lady Gaga when she arrived on the Academy Awards' red carpet. And many fans were wondering who Lady Gaga's date to the 2019 Oscars was. According to Page Six, the Best Actress nominee reportedly took her manager Bobby Campbell to Sunday's ceremony, where she was up for two awards.

According to People, Gaga recently called off her engagement to Christian Carino, though neither the singer nor the talent agent have publicly commented on the outlet's report. Rumors about a breakup first began swirling after fans noticed that she wasn't wearing her engagement ring at the 2019 Grammy Awards, as reported by E! News.

Despite her recent breakup, Gaga still reportedly has a dear friend by her side at the Oscars thanks to Campbell. In fact, the pair are so close that on Valentine's Day, Gaga revealed that she and Campbell had gotten matching tattoos in honor of their friendship. "Happy Valentine's Day. A tattoo toast to 'La vie en rose' by the beautiful Winterstone my spinal cord is now a rose..." she wrote, alongside a photo of her tattooed tribute to Ally in A Star is Born.

"Plus I got my name, written in music matching my bestie and manager @bobby_campbell," she continued, showing off the simple ink on the inside of her forearm.

The 2019 Oscars are far from the first time that Campbell would be Gaga's date to a major event; in both 2017 and 2018, he accompanied Gaga to the Toronto International Film Festival. He also appeared in the Netflix documentary, Gaga: Five Foot Two, which Campbell explained to the Los Angeles Times in 2017 was his idea.

"I wanted her to feel free enough to truly be herself and allow the cameras to disappear," he said. "I was never interested in creating a documentary that was a hyper-produced, filtered look into her life. This was about allowing her to feel empowered in her vulnerability."

And according to a 2015 interview with Billboard, Campbell revealed that his goal is to ensure that Gaga is "feeling artistically inspired every day," before giving fans an insight into their incredibly close bond. "[We talk] all day, every day — there's a lot of texting; a lot of in person."

He continued, "There's not a day that she's on the Horror Story set that I haven't been with her. When you spend so much time with someone, you know exactly where she is personally, creatively and artistically. And you understand the mood swings. I wouldn't have it any other way. I don't think she would either."

He went on to say that he's "not the kind of person that will stand in her way and that they're "usually on the same page" but will sometimes challenge each other. "She loves feedback and loves to be pushed to do her best," he added. "But she's got a vision, and I believe in it. If she says to me, 'I've got to do this,' then we do it."

While Gaga is likely going through a difficult time right now, thanks to her recent breakup, it's clear that she has a great support system around her. And regardless of what happens during the Oscars, with Campbell by her side, Gaga is guaranteed to have a night to remember.