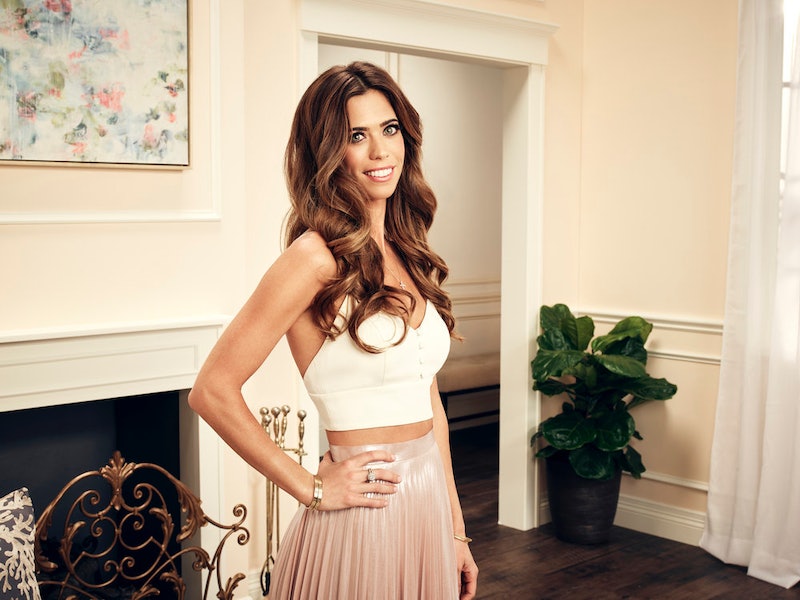 When the cast for Season 11 of The Real Housewives Of Orange County was announced, there was a slight sense of deja vu — Lydia McLaughlin is returning to RHOC. After joining the cast in 2013, Lydia left the showafter just one season. But this return could give fans a chance to get to know her and her family — including Lydia's husband, Doug McLaughlin — a little bit better

In Season 8, Lydia was the only new member of the cast. Snd she joined at a particularly thorny time, with problems from earlier seasons carrying on between Vicki, Tamra, Gretchen, Heather, and Alexis. With so much going on among the veterans, Lydia — who was pretty relaxed and good-natured — faded to the background except for having an awkward conflict with Heather over the cover of the McLaughlin's magazine.

Doug did appear on RHOC Season 8, but he never became a character the way Vicki's now ex-boyfriend Brooks, Heather's husband Terry, or even Gretchen's husband Slade did. Doug didn't appear to be looking to hog the spotlight, start drama, or even crack a lot of jokes. So, in preparation for his return to RHOC, here's what you need to know about Doug McLaughlin and his marriage to a returning Real Housewife:

He & His Wife Have Worked Together

Though Doug has since moved on, he and Lydia used to work at Beverly Hills Lifestyle Magazine together. (She's still the Managing Editor of the magazine he co-founded, according to her LinkedIn page.) Many couples would get sick of one another if they both worked and lived together, but clearly it doesn't bother these two. Granted, it looks like a lot of the couple's work these days involves traveling and doing photoshoots. Not a bad gig if you can get it.

In addition to working for years on Beverly Hills Lifestyle, Doug is the founder and editor in chief of the NOBLEMAN magazine. As the EIC of NOBLEMAN, Doug has to oversee the men's magazine's style picks, the celebrity interviews, and beautiful photography in every issue, so you know he's well-informed and has excellent taste.

They've Been Married For 11 Years

The couple celebrated their tenth anniversary in April 2016. "My forever [Man Crush Monday]," wrote Lydia in an Instagram caption. "Not just because he is easy on the eyes, but this month we celebrate 10 years of marriage. They have been the best years of my life and he has shown me such love and laughter. He is a man of integrity, faith, and fun." Now, the couple have made it through another year as a happily married couple, and it seems that they're still deeply in love.

They Have Three Sons

You may remember their two older kids, Stirling and Maverick, from the first time Lydia and Doug were on the show. After leaving RHOC, the couple had a third son, Roman McLaughlin, in 2014.

And He May Want To Have More

According to Lydia's Bravo bio, now updated to reflect her life in 2017, "Lydia urges Doug to undergo a vasectomy and close up shop, but is met with resistance when Doug isn't prepared to say 'balls voyage.'" It's not clear from the blurb if Doug just doesn't want to go under the knife, or if he's hoping to add more kids to their family, but he's clearly an attentive dad.

She Relies On His Support

With a photo posted in advance of the RHOC Season 12 premiere, Lydia wrote, "I am so thankful for [Doug] and the love and support he gives me. Tomorrow we are back on [RHOC] and it's a wild ride. So grateful to be on this adventure with this man."

This couple certainly seems to have a partnership in every sense of the word. And who knows? Having a partner as loving and supportive as Doug may have influenced Lydia's decision to return to The Real Housewives Of Orange County after a few years away.