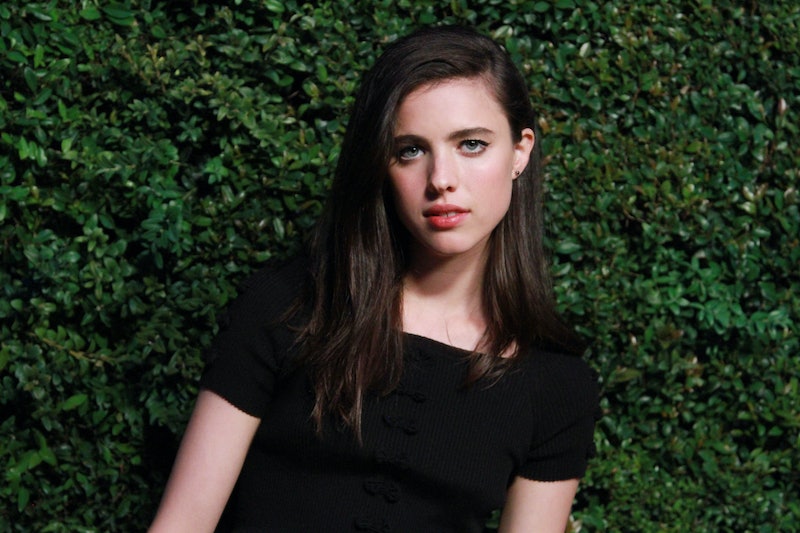 The U.S. drama series Fosse/Verdon is based on the tumultuous relationship between famed musical-theatre director and choreographer Bob Fosse, and his multi-talented wife Gwen Verdon. The series was created by the makers of Broadway smash Hamilton, and the show's impressive cast includes the likes of Sam Rockwell, Margaret Qualley, and Michelle Williams. But who is Margaret Qualley? Here's everything to know about the Fosse/Verdon star.

According to IndieWire, Margaret Qualley is an American actor who is best known for her roles in HBO’s The Leftovers, Native Son, and most recently, Quentin Tarantino's Once Upon a Time in Hollywood. As reported by the Evening Standard, Qualley was born in Montana back in 1994, and is the daughter of actor Andie MacDowell and former model Paul Qualley. At just 14 years-old the Fosse/Verdon star left home to study ballet at the North Carolina School of the Arts — and two years later she bagged an apprenticeship at the American Ballet Theatre in New York, where she also signed up with a modelling agent. However, at the age of 16, Qualley decided to quit ballet in order to pursue a career in acting and modelling.

As mentioned previously, Qualley currently stars in the U.S. miniseries Fosse/Verdon. According to the Radio Times, she portrays the character of Ann Reinking — the real-life actor and dancer who is known to have had an affair with her mentor, Bob Fosse. In addition to Qualley, the cast of Fosse/Verdon also includes Three Billboards Outside Ebbing, Missouri's Sam Rockwell as Bob Fosse, Brokeback Mountain actor Michelle Williams as Gwen Verdon, Broadway star Norbert Leo Butz as Paddy Chayefsky, as well as Aya Cash, Kelli Barrett, Paul Reiser, Susan Misner, Evan Handler, and many more.

The series makes its double-bill UK debut on Friday, August 2 at 9 p.m. on BBC Two, with the second episode scheduled to air immediately afterwards — and it seems viewers in the UK have a lot to look forward to, because the U.S. drama has enjoyed some glowing reviews. On the review-aggregation website Rotten Tomatoes, Fosse/Verdon currently holds an impressive 81 percent approval rating, and a critics consensus on site reads, "Sam Rockwell and Michelle Williams give viewers plenty of razzle and dazzle in Fosse/Verdon — a straightforward miniseries that is hampered by rote biographical tropes, but still shimmies with the requisite glitz, grit, and all that jazz audiences crave."

According to the Mirror, the series retells the ups and downs of Fosse and Verdon's relationship — and as Fosse's star begins to rise, Verdon slowly ends up in his shadow. Actor Williams previously explained that the TV drama "attempts to rectify" this imbalance by celebrating "Gwen's legacy." Speaking about her latest role, Williams said, "Gwen was written out of their story, but this show attempts to rectify that. I’m excited that people can now look back at Gwen’s legacy and discover what an unparalleled dancer she was, as well as a loving, compassionate wife and mother."

Fosse/Verdon starts on Friday, August 2 at 9 p.m. on BBC One.