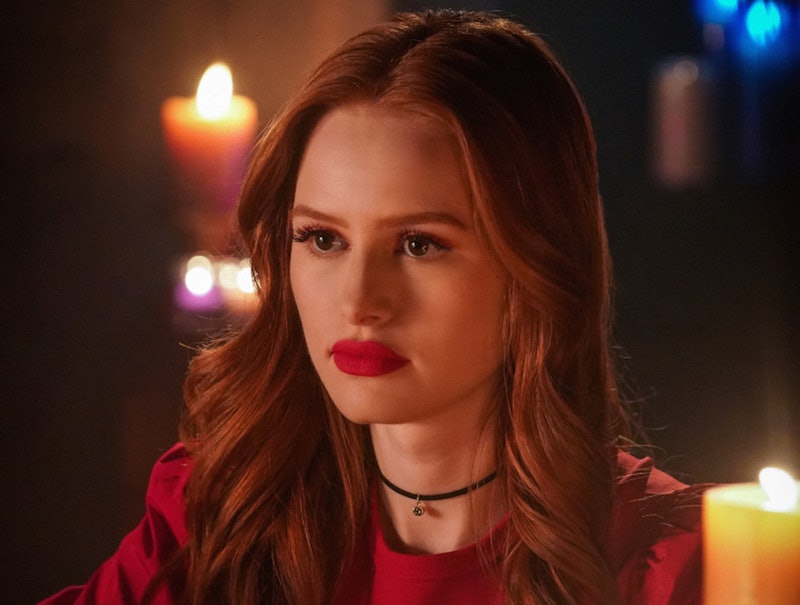 Spoilers ahead for Episode 8 of Riverdale Season 4. Riverdale may have Ghoulies, but it doesn't have ghosties. In the Dec. 3 episode, Cheryl discovered that she didn't actually absorb her triplet Julian in the womb, which means that the creepy doll version of him is not, in fact, haunting Thistlehouse. Instead, as her school counselor wisely pointed out, someone is just messing with Cheryl by moving the doll around the house and making her think she's losing her mind.

It worked — for a while. Between caring for her grandmother, raising Polly's twins, and continuing to grieve her brother Jason, Cheryl has been particularly stretched thin lately, making her especially vulnerable to whoever's toying with her sanity. Now that she knows what's really been going on, Cheryl is ready to get revenge. "Once I find out who this depraved monster is, I will unleash a wrath upon them so wicked they will wish they had been consumed in their mother's womb," she told Toni.

But who, exactly, is behind this whole Julian ruse? Cheryl's meeting with her counselor might have contained a pretty big clue. "Julian's driving you insane?" Mrs. Burble asked, to which Cheryl responded: "Of course. He's a Blossom."

That could indicate that it's a Blossom who's doing this to Cheryl, and the prime suspect is her mother, Penelope. It can't be a coincidence that this episode just so happened to remind viewers that Penelope disappeared at the end of Season 3 and hasn't been seen or heard from since. She and Cheryl already had a contentious relationship, and given that Penelope sent Betty, Archie, Veronica, and Jughead on a quest to their deaths in Season 3, she clearly likes twisted games. Plus, Riverdale loves to bring missing (or even dead) people back to the show in unexpected ways. This would be the perfect twist.

If it's not Penelope, though, it could be Nana Rose. She's shown signs of confusion in recent episodes, and she was the one who told Cheryl the story about the doll and Julian. Maybe she's unintentionally moving it around the house not knowing that it's upsetting Cheryl. Or perhaps the perpetrator is another Blossom family member. Two distant relatives already visited Thistlehouse this season, who's to say they or other Blossoms aren't behind this Julian "haunting"?

Whoever it is, it sounds like Cheryl will get to the bottom of it pretty quickly, as the synopsis for the Dec. 11 midseason finale suggests. "Cheryl finally makes peace with the past that's been haunting her," it reads. Whether that means she finds the perpetrator or just decides to put it behind her, this whole Julian debacle should be over soon, and you (hopefully) won't have to look at that creepy doll anymore.

More like this
Everything To Know About 'Only Murders In The Building' Season 3
By Gretchen Smail and Kadin Burnett
Shonda Rhimes Responded To The Surprise Exit Of A Day 1 'Grey's Anatomy' Figure
By Grace Wehniainen
Everything To Know About A Potential 'Lockwood & Co.' Season 2
By Gretchen Smail
This 'Gossip Girl' Wardrobe Error Has Gone Viral On TikTok
By Alyssa Lapid
Get Even More From Bustle — Sign Up For The Newsletter
From hair trends to relationship advice, our daily newsletter has everything you need to sound like a person who’s on TikTok, even if you aren’t.