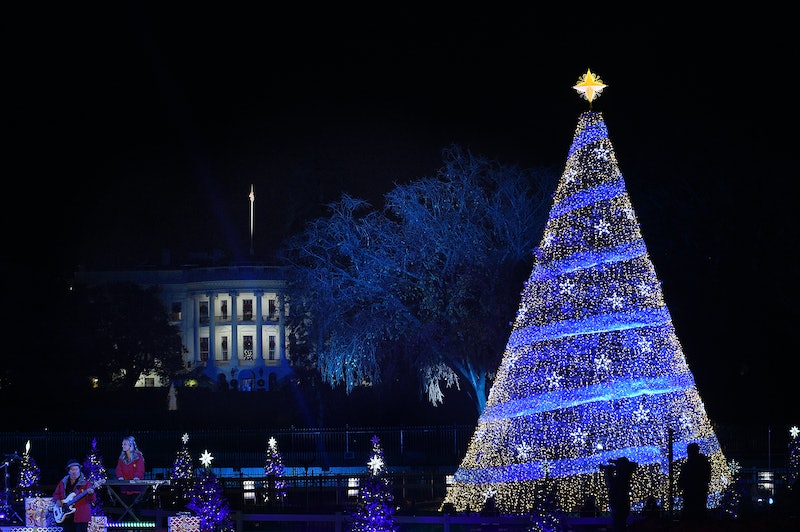 On Wednesday, Nov. 28, President Donald Trump and First Lady Melania Trump, as well as other members of the Trump family, will attend the annual National Christmas Tree Lighting Ceremony at President’s Park. The festive evening is usually marked by a series of entertainers, and this year will be no different. If you're wondering who's performing at the National Christmas Tree lighting ceremony, the answer is that there will be a wide array of mostly musical acts.

The ceremony will be hosted by actor and model Antonio Sabàto Jr., according to a press release by the National Park Foundation. The Trump family will officially light the tree, itself.

The ceremony will take place at 4:30 p.m. on Wednesday. It may cause a series of traffic disruptions around Washington, D.C., according to local reports. This means that those who live in or commute to D.C. should be mindful of what streets will be closed.

If you weren't among those to get tickets to the event, you can catch up with it over the weekend. The lighting ceremony will air on the Ovation and REELZ channels on Sunday at 10 p.m. EST.

As is tradition, the tree will be flanked by smaller trees, which will be decorated with not just lights, but also with ornaments decorated by artists and school children from around the country and beyond. There will be 56 total smaller trees, per the National Park Foundation, and they represent the 50 states, plus U.S. territories and the District of Columbia. The National Tree, which has its own Twitter account, has been sharing photos of some of the ornaments online.

One ornament the account highlighted was from school children in Nevada, who decorated their bulb with a fact about the state. (It became a state on Oct. 31, 1864.)

Another ornament the National Tree account shared was made by students in Alaska. The bulb was decorated with a picture of a fish.

The first National Christmas Tree Lighting took place in 1923, under President Calvin Coolidge, according to the National Park Foundation. That ceremony took place on Christmas Eve. Over the years the tradition has changed, and the celebration has grown larger.

Since 1954, the tree-lighting has become a month-long event. The lighting itself is only the beginning, marking the start of the Pageant of Peace, which stays in place until the new calendar year. This is where the individually decorated ornaments come into play. The 56 trees surrounding the main tree are called the Pathway to Peace. The site also includes a Nativity Scene and a menorah.