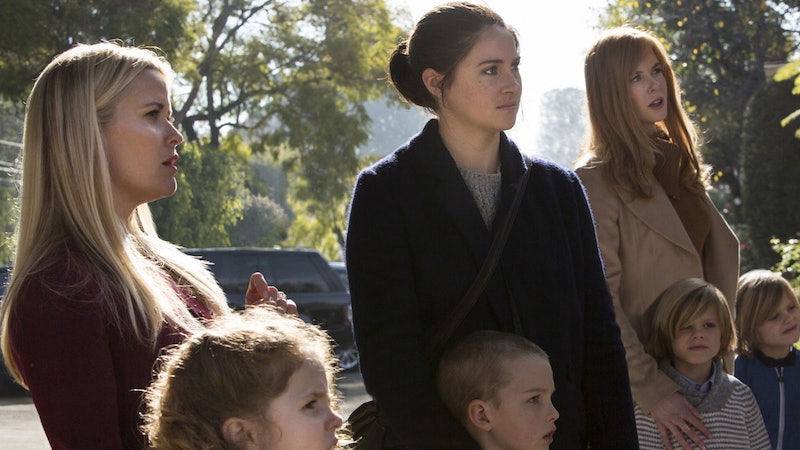 The people whose lives look perfect on the surface often have the biggest secrets, and this theme is central to the HBO limited series Big Little Lies, which premieres on Sun. Feb. 19. Based on the bestselling novel by Liane Moriarty, the series revolves around three mothers of kindergartners: Celeste (Nicole Kidman), Madeline (Reese Witherspoon), and Jane (Shailene Woodley). Their immense privilege is on full display (complete with lavish beachfront homes in Monterey, California), but nothing is at it seems. The series is structured like the book — viewers know a murder has occurred, but the victim and the killer remain a mystery until the finale. If you read the book and are rusty on the details, or you can't stay away from spoilers, you're probably already asking who is the killer on Big Little Lies? Warning — major spoilers for the book and TV series ahead.

The series opens at a school fundraiser where things go terribly awry — and by "awry," I mean the night ends with a murder. Celeste, Madeline, and Jane aren't the only key characters, so now would be a good time to talk about Bonnie, played by Zoë Kravitz. She's a yoga instructor who's now married to Madeline's ex-husband — and she's grown close to her stepdaughter, much to Madeline's dismay. Viewers never see the story through Bonnie's eyes and she doesn't initially appear to be one of the show's most important characters. Rather, she seems to be there to function as a laid-back, kinder foil to Madeline's high-strung character. But, of course, there's far more to Bonnie's character than meets the eye.

She wouldn't necessarily be the prime suspect, but Bonnie is the killer on Big Little Lies. The murder is directly linked to other acts of violence, which are slowly revealed through flashbacks and dream sequences. Jane's child was conceived after a rape and her attacker, who walks free, is "Saxon Banks." Meanwhile, Celeste is the victim of escalating domestic violence at the hands of her husband, Perry, a wealthy banker.

On the night of the ill-fated fundraiser, Jane is shocked to see "Saxon Banks" at the school — as it turns out, he used an alias when he met her. Her attacker and Celeste's husband are one and the same: Perry. On a balcony at the school, Jane confronts Perry in front of Madeline, Celeste, and Bonnie. He admits to the rape, but shows no remorse and strikes Celeste in front of everyone. It's the last straw for Bonnie, who pushes Perry off the balcony and to his death.

This, of course, raises the question of why Bonnie, of all the characters, would kill for Jane and Celeste. It's revealed that Bonnie's father was abusive, and witnessing Perry's violence triggered intense flashbacks. In a show of solidarity, the women on the balcony agree to protect her — proving that both the book and the TV series place a strong focus on the bonds between women. It's also a sobering reminder of another key theme in the book and the TV series — domestic violence is more common than people think, and the perpetrators and the victims are often the people we least expect.