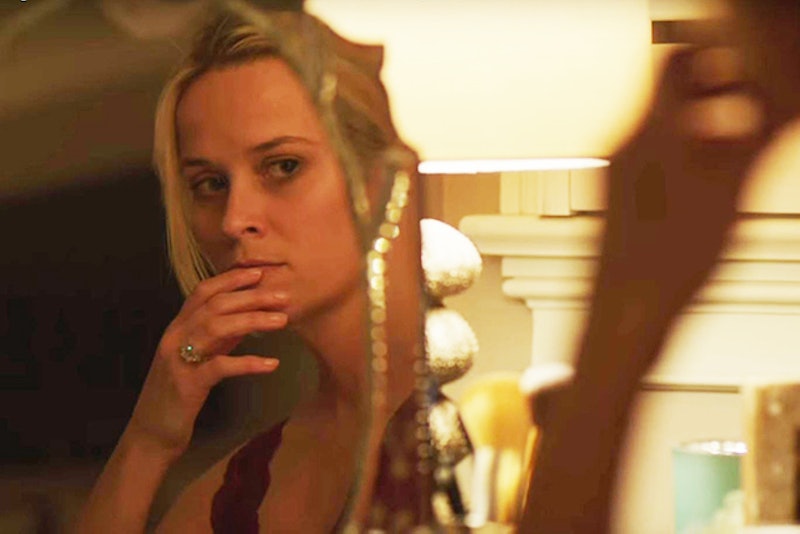 Back in October, HBO released the first Big Little Lies teaser, the network's upcoming adaptation of Liane Moriarty's best-selling novel starring Nicole Kidman, Reese Witherspoon, and Shailene Woodley. Since then, the network also announced that the limited series will debut on Feb. 19, the Sunday immediately following Valentine's Day. That mid-winter holiday seems the perfect time to unveil a chilly story about love, lust, betrayal… and murder. Somehow, the new full Big Little Lies trailer song perfectly encapsulate not just the themes of the show itself, but also the ironically appropriate timing of its premiere.

The trailer starts with about a minute of exposition, as we're introduced to our trio of troubled protagonists, Celeste (Kidman), Madeline (Witherspoon), and Jane (Woodley). We get to hear plenty of what their "friends" and neighbors think about them, until things build to a literally explosive climax. "Things never blow over," a character narrates. "They blow up." With the sound of a gunshot, the trailer switches gears, focusing on the darker side of this tale, as the main musical track finally takes over.

"Did you ever want it?" the soulful singer asks. "Did you want it bad? Oh, my. It tears me apart." In a moment of beautifully synchronicity, Kidman's Celeste can simultaneously be heard telling her husband that, "I'm trying to decide whether I'm happy or sad." So what is this perfect music?

The song is "Cold Little Heart" by 29-year-old British soul singer Michael Kiwanuka, the 10-minute opening track off his latest album, Love & Hate, which was released earlier this summer to rapturous reviews. From those haunting first lines, the lyrics only get more chillingly appropriate from there:

Did you ever fight it?All of the pain, so much powerRunning through my veinsBleeding, I'm bleedingMy cold little heartOh I, I can't stand myself

It's clear to anyone who's read Moriarty's novel — or even just watched the two-minute trailer — that these women are exceedingly dissatisfied with themselves and their lives. Their carefully manicured exteriors do a superb job of masking the turmoil they're harboring on the inside; their "pain," their "bleeding"… their "cold little hearts," if you will.

It sounds like Big Little Lies will be the perfect antidote to the typical sappy holiday sweetness this coming Valentine's Day.