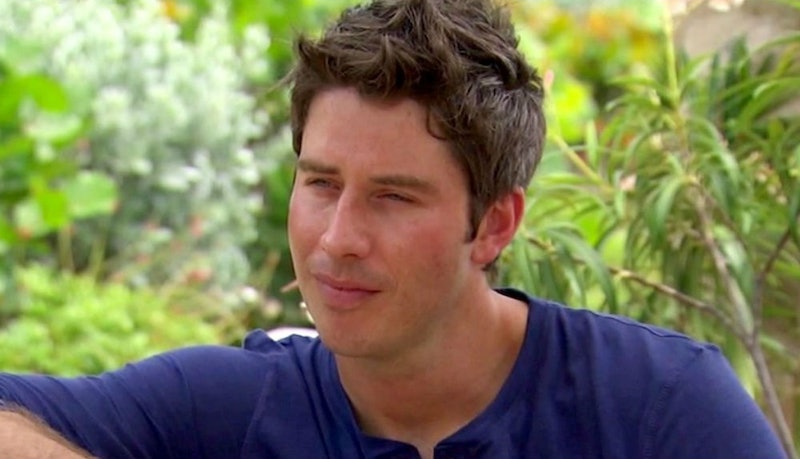 Now that Arie Luyendyk Jr. is officially the next Bachelor, it's time to discuss his Bachelor history, because, yes, this isn't the first time he's been part of the franchise. So, whose season of The Bachelorette was Arie on? Well, it was five long years ago when the now 35-year-old made his debut on the ABC reality dating series in hopes of winning Emily Maynard's heart — and he almost did.

Unfortunately, the race car driver did not win the final rose, but came extremely close by landing in the runner-up spot. Emily ended up choosing Jef Holm over Arie. During the Season 8 finale and after learning he would not be walking away hand-in-hand with Emily, Arie said as his car drove off, "I still believe she is the love of my life. It’s so painful. I can’t believe this is it."

It was certainly heartbreaking for Arie at the time, but he has clearly moved on and is ready to find love again as the next Bachelor. After the news was announced Thursday, Arie appeared on Good Morning America and said about his new journey, "I'll be 36 in a few weeks so for me it's time. All my friends around me have kids and are grown up, so for me I feel like I'm the last one of my friends to take that step. And my little brother got married, and he's 24."

As for Emily and Jef, they didn't last and went their separate ways in October 2012. At the time of their breakup, Emily released a statement to People partly reading, "I have no regrets because I did find love and shared an incredible journey with a really special person — and you know what, we tried our best because the love between us was so real."

Like Arie, Emily has also moved on and is currently married to Tyler Johnson. At the end of August, People announced Emily is pregnant with her fourth child. She has two children with Johnson and a daughter named Ricki, who is from her previous relationship with fiancé Ricky Hendrick, who tragically died in a plane crash in October 2004.

Despite all of the heartache she has experienced, Emily has come a long way and has finally found what she was looking for during her time on both The Bachelor (she won Brad Womack's season) and The Bachelorette. She is clearly head over heels in love with her husband and the proof is in the message she wrote Johnson on Instagram on February 14. "Happy Valentine's Day to my very favorite person in the whole world," she sweetly captioned a photo of him with one of their kids. "I'm so happy I married you for a million reasons but mostly because you're the best dad ever. I just wish our kids didn't like you more than me. I love you."

When she isn't busy being a mom, Emily runs her own website, where she shares her love for all things beauty and fashion. She also wrote a book, I Said Yes: My Story of Heartbreak, Redemption, and True Love, which was released in 2016 and earned a spot on The New York Times Best Seller list.

After Arie was confirmed for Season 22 of The Bachelor, Emily spoke with Us Weekly and congratulated her former suitor on his next adventure. "I can't think of a better person to be The Bachelor than Arie and I've been hoping this day would come since Season 8 ended! He's a gentleman through and through and all the girls on his season are lucky to have him." She added, "I'll be wishing him nothing but the best because that's absolutely what he deserves!"

Despite Arie's The Bachelorette season not going exactly as he had planned, at least he's getting a second chance and hopefully he ends up as in love as Emily is now.