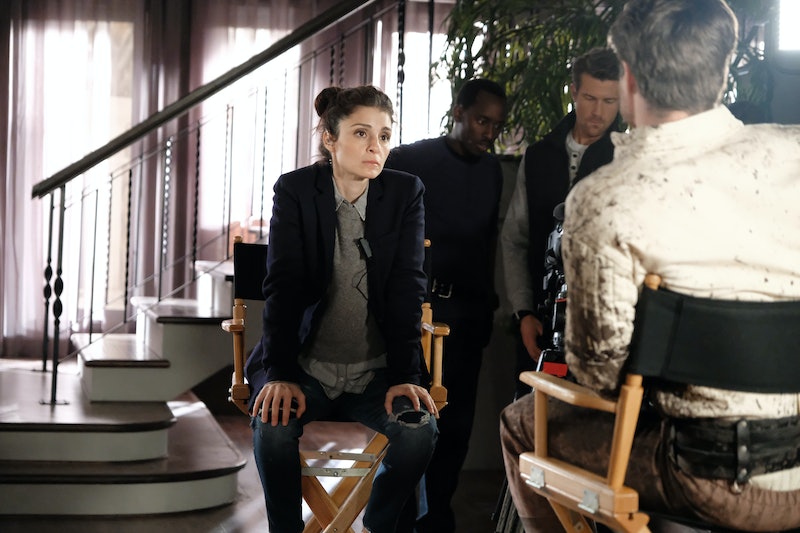 Spoilers for the March 12 episode. The center cannot hold on UnREAL. Everlasting, the Bachelor-esque fictional show on the show, is in danger of getting cancelled, and everyone who works on Everlasting is coping in their own way. Quinn is drinking and having sex with contestants; Chet is trying to make his mark and parlay this all into something else; Madison is trying to get to the top; Jeremy is avoiding Rachel; and Rachel, well, Rachel is… Rachel is acting like she only speaks the truth, but she's really spiraling off into a giant social media hole. Whose Facebook profile is Rachel looking at on UnREAL?

Rachel wasn't even involved with Everlasting when we first met her at the beginning of Season 3. She was in a giant rubber suit, floating in the ocean, living her truth, and minding her business. She's also celibate, which will be important later. But what Quinn wants Quinn gets, and Quinn wanted Rachel back on Everlasting because Rachel can make people do anything (this is a little scary, to be honest), and Quinn needs Rachel to make Everlasting a hit again. She also needs Rachel to produce the show's first female suitor ever (think The Bachelorette), and Rachel accepts, but only under the guise of continuing to live in this uber-honest place she's in now. Rachel doesn't lie anymore, which will probably make her job a lot harder.

Rachel may be just about the truth now, but as new show therapist Dr. Simon tells her, Rachel's new way of thinking isn't about telling her truths. It's about telling the truth about other people, which is more blame-y than anything else. Rachel's truth is more akin to excusing herself from blame, as Dr. Simon says, which Rachel doesn't love. She's acting like she has it together, with her honesty and her celibacy, but focusing on both of these as tenets of a wonderful, problem-free new life is actually making things worse. Why? Because Rachel lies for a living, and she uses illicit sex and hookups as a way to forget that what she does for a living is actually terrible.

At the end of the March 12 episode, Rachel is furiously scrolling through Google and Facebook, looking at photos of the same man. We've never seen him before on the show, so he must be someone important in Rachel's past. He's not from Everlasting — if he is, he's not a key player — but he may have come from Rachel's home life.

Rachel's psychiatrist mother kept Rachel drugged for years, alleging that her daughter suffers from a host of mental problems, but Rachel admitted that her problems started when she was a child and one of her mother's patients raped her. Her mother didn't deal with it well, or at all, frankly, choosing instead to say that Rachel suffered from mental issues rather than ruffle the feathers of her practice. Dr. Simon seems keen on really working out what's going on beneath the surface of Rachel, and coming to terms with her rape should be at the top of that list.

In an interview with TV Guide, UnREAL creator Sarah Gertrude Shapiro said, "I would say that [this season] we finally ask the question what the hell is wrong with Rachel, and we answer it." Shiri Appleby, who plays Rachel, echoed that statement to Variety, saying that Rachel will want to confront her past head-on.

That said, is the man that Rachel's obsessively clicking on her rapist? Because he was a patient of her mother's, Rachel would know his name and about where he lives, making him easy to find with just a simple Internet search. Rachel's never had an ethical therapist that actually wanted to help her, so maybe now that Dr. Simon (who is really on the show just for Rachel) is there, Rachel wants to come to terms and find her own personal truth. That includes the traumatic events that have shaped her life and caused her to choose a life of lies and manipulation into adulthood.

But knowing Rachel, it's a tenuous tightrope she walks — her intentions are good, but she tends to fall back into her own ways very easily. (And Quinn doesn't help.) Let's hope that the third season of UnREAL helps her heal and not wreak more havoc.