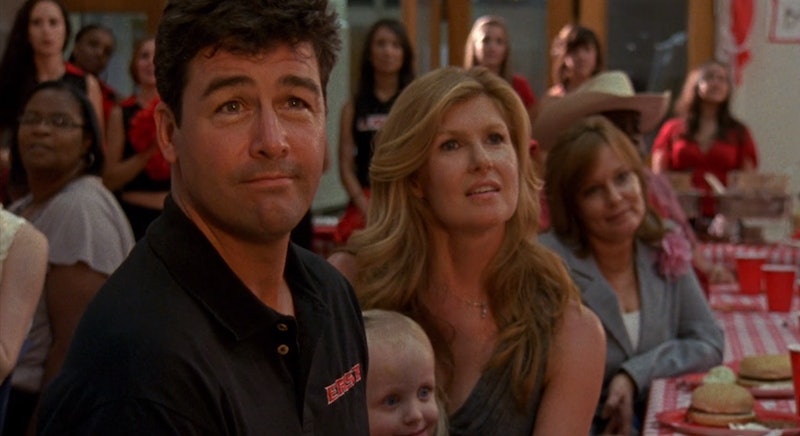 While TV reboots and revivals have become all the rage, there's no arguing that certain projects are better left alone. Fans may be disappointed to learn that Connie Britton shut down a Friday Night Lights movie idea. However, her reason is not only completely understandable, it's also respectful to the original series that audiences loved so much.

Over the weekend, the Dirty John actor was actually surprised that fans were still hoping for a film continuation of the show when it was mentioned during an interview on Watch What Happens Live with Andy Cohen. "Oh. Is that still being talked about?" she asked Cohen. "Guys, I just don't think it's going to happen. I don't. People really — I think that the consensus is they want to just let it lie, you know?"

Britton starred as guidance counselor Tami Taylor, alongside Kyle Chandler as her husband and the high school football coach, Eric Taylor. The beloved NBC show, based on the 1990 non-fiction book, Friday Night Lights: A Town, a Team, and a Dream, chronicled the ups and downs of a tight-knit Texas community. Although its stories are timeless, Britton feels strongly about the series' ending which is why she believes it should be left alone.

"I have to say, I've kind of come full circle, because I was all for it in the beginning," she admitted to Cohen. "I think if we had done it early on... But now, I really do see how special it is to be able to end a series in that way. It was just so beautifully done and beautifully arced. That, yeah, I think we kind of did it.”

Britton also reminded audiences that she already had her part in a film adaptation of the book: the 2004 film of the same name (which later led to the TV adaptation). "The movie was actually a recreation of the book, the Buzz Bissinger book, and that book was a journal that took place in the '80s," the actor explained. "In the movie, we were playing actual characters, so I was playing a woman named Sharon Gaines and the coach was Coach Gaines." Coach Gaines was played by Billy Bob Thornton. "In the show, it was a different time period. It was modern day. We were fictional. It was an adaptation."

But fans aren't totally wrong in speculating. In May, it was announced that an entirely new Friday Night Lights film adaptation was in works. Variety reported that the Universal film would be helmed by director David Gordon Green, and it wouldn't be a sequel to the 2004 film, nor an extension of the TV show. It was reported, though, that the film would also be based on Bissinger's book.

Britton isn't alone in thinking the show's cast and crew should leave the project alone. In a 2015 interview with Entertainment Weekly, Kyle Chandler addressed revival rumors, saying, "It ended so well, it ended beautifully. And I was more than happy for it to end when it did, because you couldn't have gone much further."

More recently, actor Scott Porter expressed a similar sentiment to Us Weekly. "Anytime someone mentions getting the band back together on Friday Night Lights, I think about how fortunate we were to tell our story the way we wanted to," the actor explained. "A lot of us from Friday Night Lights all got the closure because it ended so well... I think you can tell new, beautiful, wonderful stories."

And for fans who want more, there's always a good marathoning session.

More like this
'Abbott Elementary' Fans Probably Missed This 'Parent Trap' Easter Egg
By Sam Ramsden
At 28, Rosie Perez Risked Her Career To Stop Playing Stereotypes
By Gabrielle Bondi
Taylor Lautner Copped To Finding Jacob "A Little Annoying" In Twilight
By Stephanie Topacio Long
James Cameron May Come To Regret His 'Titanic' Door Experiment
By Stephanie Topacio Long
Get Even More From Bustle — Sign Up For The Newsletter
From hair trends to relationship advice, our daily newsletter has everything you need to sound like a person who’s on TikTok, even if you aren’t.