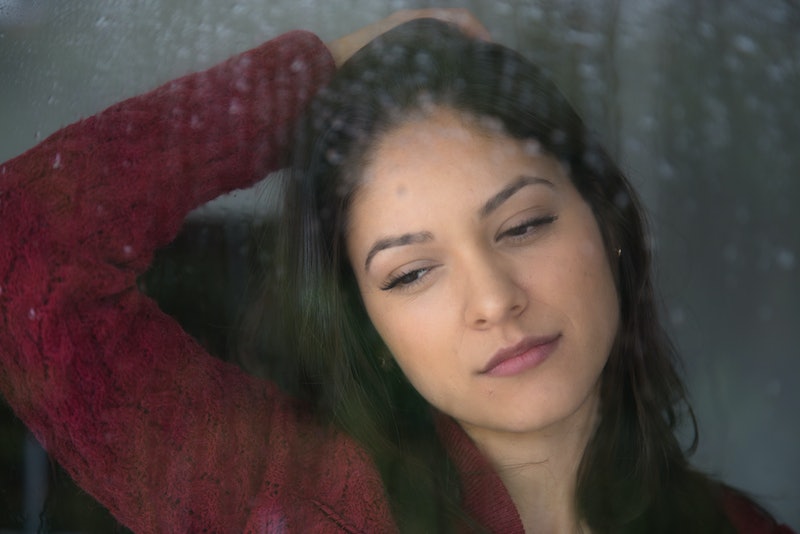 If all you want to do on rainy days is curl up for a good ol' nap, you're not alone. You might feel sluggish, groggy, or just plain garbage — just like the weather outside. But while you might think it's just a coincidence, it turns out there's actually legit scientific reasons why we're so tired when it rains.

Dr. Michelle Drerup, Director of Behavioral Sleep Medicine at the Cleveland Clinic, tells Bustle that the lack of sunlight that comes with rain is a "major factor for increased sleepiness." When we're exposed to sunlight, our pineal gland releases less melatonin, and we feel more awake, Drerup explains. So on a rainy, cloudy day where we don't get to soak in the sun's rays, we're more likely to feel tired.

Sunlight also increases serotonin, Drerup notes, which means that the rainy-day blues are also caused by the balance of brain juices in our bodies, since we produce less serotonin on days without the sun. For folks who use things like light therapy boxes to get through sunless winter months, the fact that less sunlight can sap not only energy but happiness from us likely isn't a surprise, but it is a reminder to be sure we're catching as much sun as possible.

Another factor in rainy day sleepiness is humidity, Drerup says. On days when the rain makes the air feel "heavy and sticky," "[t]he humidity can be physically exhausting because of the mechanisms the body uses to keep itself cool," Drerup says.

One less-surprising contributor to us feeling tired on rainy days is the fact that "an object at rest remains at rest," Drerup says. Basically, if you wake up and decide to spend the day inside because it's raining, hanging out in bed with a Netflix binge or a book is likely to make us tired just because we're inside, we're chilling, and let's be honest, a nap or two is probably going to happen, no matter how hard it is to fall asleep during Altered Carbon and Santa Clarita Diet.

Of course, rainy days can't all be stay-in-the-house days, because jobs and various other commitments call to us. (Ugh, I know.) Luckily, Drerup has some advice for how to get yourself going during rainy days. One of those ways is the previously mentioned light therapy box — one that has least 10,000 lux light intensity, Drerup says, for 30 to 60 minutes in the morning. Popping that baby out while you're getting ready and letting it wake you up while you're putting on makeup or eating breakfast "can be extremely helpful to fight sleep inertia and help increase alertness during daytime," Drerup says. Drerup also suggests the most dreaded of ways to wake up: Exercise. "Step away from your desk and take a walk with a coworker," she suggests. "Increased physical activity boosts energy levels," she adds, and "[p]hysical activity has many good effects on the body and mind."

To that end, whether you greet the day with a bout of exercise or not, be sure you're staying hydrated. (And no, staying hydrated unfortunately does not mean drinking an extra iced coffee.) Drerup warns to be careful of caffeine, because "although its stimulant effect initially promotes alertness and alleviates fatigue, its effects are most pronounced in the first hour and some people may notice a 'crash' as the caffeine leaves their system."

Additionally, if, like me, you often find yourself mainlining caffeine to get through that 3 p.m. slump, you might have trouble getting to sleep afterward, and that means looking forward to another sleepy day, rain or no rain.

Sometimes getting through a sunless day can seem impossible, and you can take a nap, Drerup says, but watch the timing and the length. You should only be napping for 10 to 30 minutes, she advises. (Sounds like it's time for a NASA nap!) Also, make sure you're not napping late in the day, or you're likely to disturb your sleep schedule by pushing your bedtime back a few hours.

All in all, remember that being emotionally prepared for rainy days is just as important as having an umbrella on hand, and you'll be much more equipped when it comes to fighting off rainy day fatigue.

More like this
The Summer Solstice Spiritual Meaning, Explained
By Jessica Booth and Brittany Beringer
6 Abortion Advocates To Follow On TikTok
By Sara Youngblood Gregory
How To Protect Your Digital Privacy If You Need An Abortion Post-Roe
By Kaitlyn Wylde
13 Summer Solstice Quotes To Celebrate The Longest Day Of The Year
By Sadie Trombetta
Get Even More From Bustle — Sign Up For The Newsletter