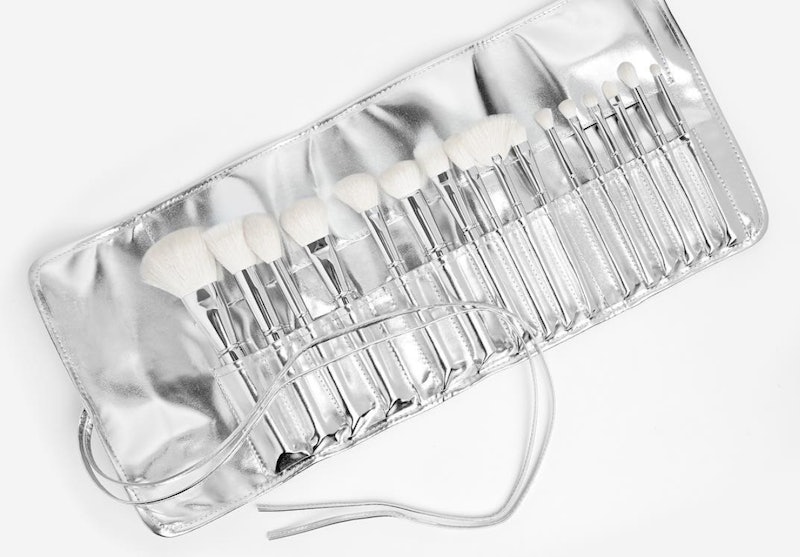 The drama surrounding Kylie Cosmetics' Silver Series makeup brushes remains an internet hot topic. That's because the collection is both extensive and expensive. There are 16 silver-handle brushes, branded with Kylie Jenner's name. The brushes are made from real hair, rather than a synthetic alternative preferred by beauty lovers with animal sympathies. The prestige tools can be purchased individually to suit your makeup needs or as a complete, limited edition set with a silver brush roll for convenient and stylish storage.

If you do the math, the brushes average $22.50 a piece in the set. The luxury set could serve as a worthwhile investment. The tools could last for years if properly cared in terms of cleaning and storage. Plus, if you use them daily, they end up being pennies per stroke in the long run. Regardless, it's still incredibly pricey for lots of shoppers who are wiping out their wallets during the holiday season or those on a budget.

Jenner herself responded to the fan backlash, noting that it's a luxury collection and claiming the real hairs trump the faux bristles every time in terms of performance and quality.

Her initial response feels a tad tone deaf, since she doesn't seem to acknowledge that most of her shoppers don't have as much expendable income as she does.

Jenner also compared her set to other prestige brands, such as MAC, Artis, and Kevyn Aucoin, which many says is an unfair comparison given the prestige of those brands.

She wrapped by telling fans she loves them and only wants to provide them with the best possible product. While her points are appreciated, fans remain frustrated at the cost of the brush set.

Perhaps none is more telling than this tweet. Fans probably don't have nearly $400 to shell out for brushes that they can't test in advance to determine quality control.

This user also makes a valid point — the brush prices don't fit most of her customer's budgets.

This tweet also puts things in perspective regarding the pricing, especially since most Kylie Cosmetics shoppers aren't celebs but everyday people.

One user took Jenner to task here. Since it is her company, she should set or have final say in the cost, so the point of battling for her customer is mute.

Another noted that Jenner's two-year-old company hasn't earned the right align itself with legendary brands such as MAC, which have earned their respect over time.

The Twitterverse also noted that the brush prices aren'y comparable to brands like Morphe, which they say are more in Kylie's league.

This brush collection is almost double the cost of Jenner's set and has two less tools. However, these are tools of the trade for professional makeup artists. The handles are encased in lucite. The craftsmanship sets them apart for artists who depend on quality brushes to make bank. Also, industry icons are judged by their body of work over time. Aucoin's legacy has been earned. Many say Jenner just isn't "there" yet, despite her brand's success.

This set boasts 21 tools — that's five more than the Kylie Collection, so each brush is just over $14 a piece. It's 70 dollars cheaper, designed for pros and enthusiasts, and made of both synthetic and animal hair, the latter of which is ethically sourced and cruelty-free, per the description on the Sephora site. Even with real hairs, the price point is much lower. And Natasha Denona is even known for pricey — yet high performing — products.

As of press time, the brush bundle is not sold out on the Kylie Cosmetics site, so it's quite possible that shoppers are responding with their dollars. That is, by holding on to them.