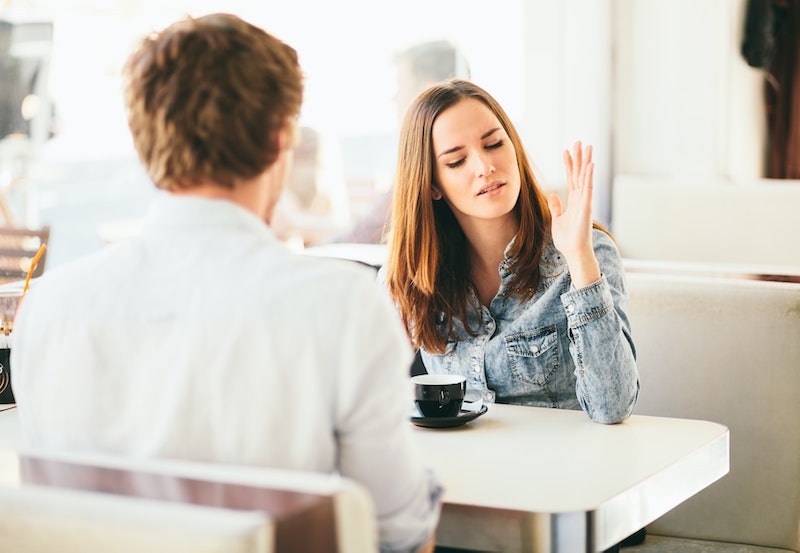 "But the problem is, if you're not a little pushy, women will be mad at you." I've heard more than one guy say this when I've complained about how aggressive some men can be toward women. It's an unfortunate irony: A lot of guys who date women don't like it either. They feel obligated to put their arms around a date's shoulders before they're sure she wants it, pull her hair during sex without asking if she likes that, and do other things that are often deemed "making the first move" or "taking the reigns" or "being a man" but would be better labeled "sexual misconduct."

For all I know, there really have been women who got mad at these men for being "too" shy, slow, or passive. But then I say, keep making them mad. Aggressive behavior during dating or sex is dangerous. The prospect that someone might like it is not worth risking the chance that they won't — which would be sexual violence.

"Ignoring another person's 'no' is violence, especially in pursuit of your own 'yes,'" marriage and family therapist Shadeen Francis tells Bustle. "Only an uncoerced 'yes' can be considered permission to continue any sexual, emotional, or physical encounter."

Many people don't realize this. Recently, a man tried to kiss me after I told him I had a boyfriend and only wanted a platonic relationship with him. After I repeatedly told him to stop, he said, "it's OK, you don't have to feel guilty about not kissing me." I was flabbergasted. He was trying to sexually assault me (yes, unwanted kissing is assault), yet he thought I'd feel guilty. He experienced no guilt. How was that even possible?

Then I realized, what he was doing is part of a societal script for how men behave toward women. He'd learned somewhere that it this was hot or romantic to ignore a woman's "no." That there was a "yes" somewhere in there that he just had to draw out.

It's a common pop culture trope: A man tries to get a woman to date or sleep with him. She's not interested. So, he "fights" for her and "convinces" her to "let down her defenses." Except that if you have to fight for someone, convince them, or remove their defenses, you don't actually have clear, enthusiastic consent.

Kate McCauley, MEd, LCSW, a therapist who teaches a class on relationship health, uses the country song "(Kissed You) Good Night" by Gloriana as an example of this problematic trope. "I should have pushed you up against the wall / I should have kissed you," it goes. McCauley tells Bustle that "there is sexual stimulation in 'playing it rough,' but it requires a level of communication that is respectful and stops when either party says 'no.'"

The example used by psychiatrist Dr. Susan Edelman, author of Be Your Own Brand of Sexy, is Fifty Shades of Grey. "The popularity of books and movies like Fifty Shades sends a dangerous message to men and women: 'If you want a hot sex life, do it the Fifty Shades way or you aren't desirable,'" she tells Bustle. "We must address the over-sexualization of violence in our culture. The more we see violence as normal, glamorous, or defined as romantic, the more many men and women can't see the harm in it and can no longer differentiate when a man has stepped over the line."

"By encouraging people to be aggressive in their pursuit of partners, we also encourage them to ignore the needs for space and safety of others."

A guy friend once told me that even if a man thinks he has just a one percent chance, he'll pursue a woman because he doesn't want to miss that chance. Men are taught that they've failed if they leave any opportunity on the table. What they don't realize is that if someone's actually interested in them, the opportunity won't go away just because they're being respectful. If someone only appears interested in you after you've been pushy, they probably weren't interested in the first place. They just felt pressured to appease you.

And to those who think of aggression, pushiness, or relentless persistence as a turn-on, Francis says this: "Aggression in itself is a boundary violation. By encouraging people to be aggressive in their pursuit of partners, we also encourage them to ignore the needs for space and safety of others. Persistence can very easily become coercion." And that's not romantic or sexy at all.