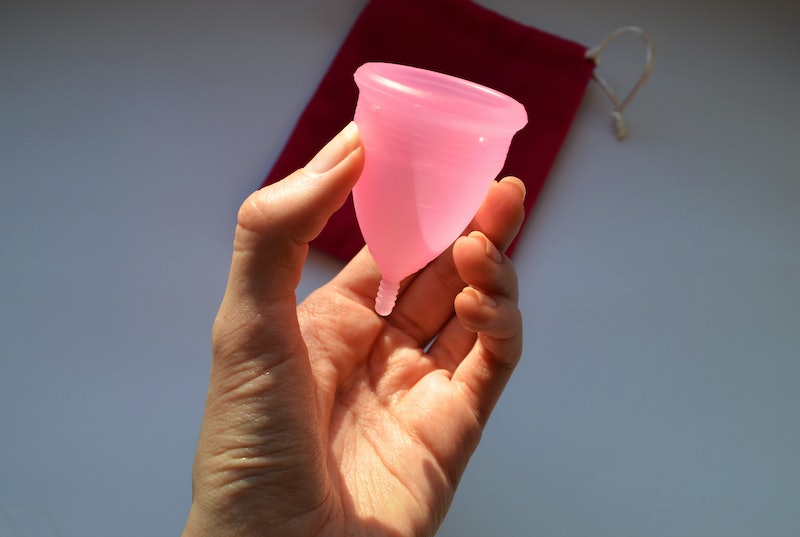 Right now is probably the best moment, in all of recorded human history, to be a person with a period. American culture is becoming more open about the once-taboo topic — NPR noted that use of the word "menstruation" in major news outlets more than tripled between 2010 and 2015 — and we're awash in innovative period products our elders could only dream about. Today, people with periods can choose from traditional disposable products, menstrual cups, reusable pads, reusable absorbent underpants, and even reusable tampon applicators — most of which they can pick up at big chain stores like Walmart, Target, or the UK's Waitrose.

In 2018, Tampax became the first major menstrual product company to release their own menstrual cup. That same year, Kristen Bell recounted her menstrual cup mishaps on talk show Busy Tonight, certainly marking a first in the history of late-night television. As Lunapads co-founder and CEO Suzanne Siemens tells Bustle, "I think there’s just something shifting in the cultural conversation about our bodies." Basically, we're in a golden age of menstruation.

All this innovation, in such a short period of time, begs a question: why now? Why have Google searches of terms like "menstrual cups," or brand names of reusable period products like Diva Cup, more than doubled since 2009? Why can you suddenly buy reusable period products — once sold only health food shops and feminist co-ops — at stores that also sell motor oil, Oreos, and Xboxes?

It would be easy to imagine this flood of menstrual innovation was tied to a brand-new invention. But as gender and health historian Dr. Kelly O'Donnell tells Bustle, the first patent for a device similar to today's menstrual cup was filed in 1903. (Yes, over 100 years ago.) In fact, the current push to sell the public on menstrual cups is nothing new; the '60s and '70s saw cups advertised on TV and in major women's magazines, and sold in national pharmacy chains.

So why is the period product renaissance only happening now? According to some of the people who helped make it happen, a perfect storm of environmental advocacy, political action, and social media engagement made the menstrual cup into an overnight sensation that only took a century.

The first menstrual cup to make a real cultural impact, the Tassette, was first produced in 1937. Appearing on the scene just a few years after the first commercially produced menstrual pads and tampons, it discontinued production after a few years. It was revived in 1958, discontinued in 1963, and in 1969, revived again as a disposable cup called the Tassaway. The Tassaway got some attention — it had ads in magazines like Cosmopolitan, got shouted out in early editions of feminist health guide Our Bodies, Ourselves, and in 1971, it became the first menstrual product to have a TV commercial. But none of that was enough to sell the public on this period product, whose own ads admitted the cup might strike shoppers as "a little strange." In 1973, production on the Tassaway halted again.

Almost moments after the Tassaway left the menstrual product market, that very market began changing. In the late '70s, feminist activists, seeking alternatives to mass-produced menstrual products, began making their own reusable tampons made from sea sponges and reusable menstrual pads. Toxic Shock Syndrome, a complication of bacterial infection linked to tampon use, gained major public attention in 1979 and 1980, when the CDC reported over 800 cases of TSS, and nearly 40 TSS-related deaths, almost all related to super-absorbent tampons. And in 1987, the Keeper — the first modern reusable menstrual cup, with a similar design to the Tassette — hit the market.

"It'll never become mainstream in America. It involves too much contact with the body."

However, for the next decade-plus, menstrual cups, as well as washable pads, were sold primarily through progressive businesses, rather than pharmacies or other stores where you might find traditional menstrual products. (I bought my first menstrual cup in 2008 at a feminist bookstore that also sold zines about anarchism and lollipops shaped like vulvas, if that helps paint a picture.)

A 2003 New York Times article on menstrual cups, focusing on the then-recent uptick increase in sales, treated them as a bit of a novelty, quoting Museum of Menstruation created Harry Finley as saying ''It'll never become mainstream in America. It involves too much contact with the body, and I think most women are squeamish about that.’’

Over a decade later, roughly 2-3% of people with periods use a reusable product, according to a 2016 Atlantic article. Jane Hope, marketing and communications manager at reusable period product pioneers Lunapads, tells Bustle that her company "has seen a lot of growth over the past few years, and the last year we saw a jump of 40%, a pattern we're projecting to repeat this year.”

Some of the factors contributing to this tipping point where already in place in 2003, when that New York Times article predicted cups could never go mainstream — like environmental awareness. Celia Pool, co-founder of UK menstrual products company Dame, told Bustle that the company’s reusable tampon applicator, D, was able to find major public support during its 2018 launch because of concern over disposable applicators. The average menstruator will send over 9,000 applicators to the landfill in their life — and plastic applicators can't be recycled, take centuries to biodegrade, and can even kill marine animals if they end up in the ocean. Disposable pads can be even more damaging to the environment, as each one can contain as much plastic as four shopping bags, according to a 2018 BBC report.

D was able to quickly find a home in major chain stores, Pool tells Bustle, because “in order to...respond to the costumer complaints that they're getting about the amount single-use plastic that's in their store, [stores are] realizing that they have to make meaningful changes, and they have to make them quite quick.”

Under the Trump presidency, connecting with your body and the "blood coming out of your whatever" can feel like a radical act.

There’s also marketing. While the Tassaway was marketed as a mainstream product, in the decades that followed, cups and reusable pads were generally only sold as niche products. Dr. O'Donnell, the menstruation historian tells Bustle that “Back in [the late '80s] when the Keeper started, they were putting ads in places like the Vegetarian Times." But today's menstrual cup advertising is geared more toward a mainstream audience , which, she notes, is "more of a return to the approach in the '60s/'70s by Tassette."

However, a number of the factors that created our current menstrual renaissance are newer. One is that, under the Trump presidency, connecting with your body and the "blood coming out of your whatever" can feel like a radical act. Amanda Hearns, co-founder of online menstrual cup community Put A Cup In It, tells Bustle that while there was a pre-existing movement to normalize periods, the 2016 election "to me, felt like a catalyst for firing up and focusing some phenomenally strong and vocal women.”

Another is the same innovation that played an ignominious role in the 2016 election: social media. As Dr. O’Donnell says, “Back in the '60s, Tassette executives realized that word of mouth was the most effective way of attracting/convincing buyers, and here in the 2000s/2010s, you have perhaps the ultimate word-of-mouth technology in the form of the internet … There is basically an army of menstrual cup ambassadors online now.”

The same kind of social media attention that can make a certain skincare product or winter coat go viral seems to have also played a role in the rise of reusables. Once cup users "try one and realize how much their period experience improves, they feel compelled to tell their close friends or online followers," Kim Rosas, co-founder of Put A Cup In It, tells Bustle. “In 2008, many of my own friends and connections in the online space were discovering cups, but it was very much in the vein of eco-awareness and reducing waste. Within the last six years, awareness and use has exponentially increased, and I am of the opinion it’s all thanks to work of mouth marketing from users like us.”

Social media has also helped fight some of the menstrual stigma that creates what Lunapads co-founder and CEO Suzanne Siemens tells Bustle she calls "the ick factor." In 2015 — a year tagged “Year of the Period” by some outlets — social media helped Kiran Gandhi’s freebleeding during London Marathon gain international attention. The same year, social media support helped poet Rupi Kapur fight back when Instagram deleted a photo she had posted of herself wearing pants with a menstrual blood stain; online support also played a crucial role when ads for the reusable period underpants company Thinx were deemed “too explicit” to be shown on the New York City subway system.

Siemens tells Bustle that Gandhi's visibility was a huge breakthrough for Lunapads, who sell reusable pads, underpants, and menstrual cups. “The ick factor is really the thing that held us back in the early years,” says Siemens, but social media has provided a way for cups users to be open and honest about their experiences. And when you do that, Siemens notes, “it becomes normalized."

Siemens tells Bustle that there's no one single thing making menstrual cups popular right now, which might be the most 2019 thing about it. Every menstrual cup user is making the change with their own interests, needs, and motivations. But together, users end up showing the powers that be exactly what can go mainstream in America.