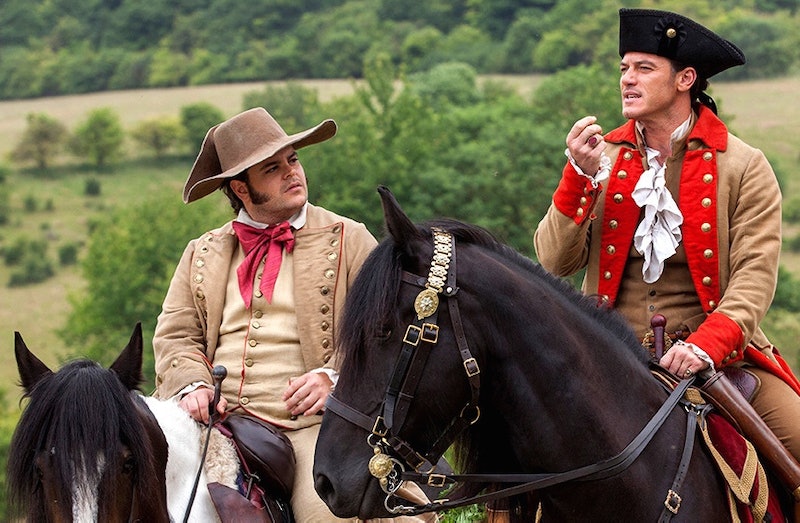 Disney fans had a lot to say when director Bill Condon told Attitude magazine that the live-action remake of Beauty and the Beast would have an "exclusively gay moment." Some denounced the film as a result, such as the Alabama drive-in theater that pulled the movie in protest. Others heaped praise upon the movie for being "groundbreaking" before it had even come out. In reality, the scene is neither groundbreaking nor really even "exclusively gay." It's disappointing to think that Beauty and the Beast will be applauded for its representation when the majority of the movie still showed a gay character being manipulated by the (straight) person he loved. Spoilers ahead.

The talked-about scene comes when LeFou, now free of Gaston, is dancing with a woman in the closing number and, suddenly, a man cuts in. It's a villager, who, in a previous scene, had been attacked by the wardrobe with dresses and found that he quite liked wearing one. The two men dance together for about three seconds before the film cuts away to all of the other happy, straight pairs. That's it. As Condon explained it to Attitude:

“LeFou is somebody who on one day wants to be Gaston and on another day wants to kiss Gaston. He’s confused about what he wants. It’s somebody who’s just realizing that he has these feelings. And Josh [Gad] makes something really subtle and delicious out of it. And that’s what has its payoff at the end, which I don’t want to give away. But it is a nice, exclusively gay moment in a Disney movie.”

"Subtle" is a bit of an understatement. It was hardly even a long enough scene to truly understand what was happening. If you weren't specifically looking for it, you could have blinked and missed it. I was looking for it, and I still don't really understand exactly when LeFou's realization about his sexual orientation happened. After being literally left for dead by Gaston, LeFou tells Mrs. Potts that he and Gaston aren't in a good place at the moment (an understatement). Then, the next time we see him, LeFou is briefly dancing with a man. Am I supposed to fill in all those blanks myself? Many people won't at all. Hardly an "incredible moment" for gay representation.

I can acknowledge that Condon has taken a (small) step forward with this scene, but I'm certainly not going to praise the director and cast for representing the gay community when they did so little to represent us. LeFou's dance scene was further diminished by the fact that it wasn't even "exclusively" gay. As Vulture pointed out, you could still see the other straight couples in the shot. This reduces LeFou's "incredible moment" to really just a large celebration of mostly straight love with a same-sex couple thrown in.

Of course, LeFou is a gay man for the entire movie preceding this moment, but he hasn't yet come to terms with it. In one scene, he and Gaston lament the fact that LeFou hasn't found a woman of his own yet. It could have been an opportunity to actually say that he wasn't interested in women or even hint at it so that audiences would have known this about his character — even if they hadn't read interviews about it. Instead, LeFou told Gaston that he hasn't found a wife because he's "been told he's too clingy."

No matter how hard you try, there is no way to read that moment as a hint about his sexual orientation. In fact, I felt annoyed that I was supposed to do all the work myself, and was seemingly supposed to read into LeFou's prancing around, waving his hands and making facial expressions as being "gay," when really those movements are often used as gay stereotypes. This kind of portrayal is more damaging than it is helpful, because it reinforces harmful tropes and conventions instead of showing that all gay people are completely unique and act in different ways.

The fact that LeFou is the gay character is also problematic in and of itself. His name literally means "The Fool" and he is hopelessly in love with his straight best friend, Gaston. I've always had an issue with shows or movies portraying this dynamic. Once Upon a Time did it with Mulan, having her fall for Aurora who was in love with her own prince. After viewers learned of Mulan's true feelings, she was literally written out of the show for several seasons. Some happy ending that was. Even movies that have the same sex couple end up together often start with the gay one "corrupting" a straight person. See: Imagine Me & You, Kiss Me, and Kissing Jessica Stein.

I think that portrayal suggests that straight people have a reason to fear their gay friends, as LeFou's obsession takes things to an uncomfortable level for Gaston. In one scene LeFou wraps Gaston's arms around himself during a song before asking, "Too much?" To which Gaston replies that it is and extricates himself from the embrace. I don't want straight people — especially the young viewers who will undoubtedly see Beauty and the Beast — to think that their gay friends are going to develop creepy, obsessive crushes on them. This is a dangerous dynamic to portray, especially as a first step into LGBTQ representation for these types of films.

What's more is that Gaston also spends much of the movie manipulating LeFou's love for him. When he's down in the dumps, he relies on LeFou to heap praise on him and build him back up. When trying to convince the townspeople that he didn't try to hurt Maurice, Gaston persuades LeFou to lie for him by giving him physical and emotional attention. "LeFou, my oldest and dearest companion," Gaston says, cupping LeFou's face. He then asks LeFou to tell the townspeople what "really" happened. LeFou is clearly uncomfortable lying, but how can he say no when the man he loves is giving him this (brief and false) sense of intimacy?

Seeing Gaston use LeFou's love for his own gain is hard to watch. I know Gaston is a villain, but if LeFou is supposed to represent this great, big success for gay representation, it's frustrating that the writers chose to make this character the gay one when so many things are wrong in his dynamic with Gaston.

If Beauty and the Beast's writers and director really wanted to take a step forward, they could have considered portraying Belle as a gay princess. She often sings about longing for a different life and how she doesn't want to be with Gaston — what if that was because she didn't like boys at all? That may be more of a giant leap than a step, but it would be incredibly impactful to see a gay protagonist end up in a same sex "happily ever after."

But a few seconds of two stereotypically gay characters (the caricatured LeFou and and the guy who likes wearing a dress) dancing with each other is not progress — especially when it's the conclusion to a movie that let a gay man be constantly mistreated by the straight man he's in love with. While I'm glad that Beauty and Beast tried to add LGBTQ representation, I hope the filmmakers aren't patting themselves on the back. Giving congratulations in this instance runs the risk of other filmmakers believing that doing this bare minimum is enough to be given credit for promoting LGBTQ diversity.

Until we have a gay protagonist in a Disney film, I'll just be hoping that someday, my community can be represented by someone I can look up to, rather than the bumbling, sniveling sidekick of a villain who gets a mere seconds-long "exclusively gay moment" in the background of a straight couple's happy ending.

More like this
Read Dan Levy's Heartbreaking Message After The Club Q Shooting
By Stephanie Topacio Long
Introducing Beauty Beat, The UK’s First Luxury Beauty Event For Women Of Colour
By Justine Knight
Amanda Gorman Shared A Powerful Message On Meghan Markle’s Penultimate Podcast
By Darshita Goyal
Stormzy Was The Ultimate Fanboy When He Met Taylor Swift
By Sophie McEvoy
Get Even More From Bustle — Sign Up For The Newsletter