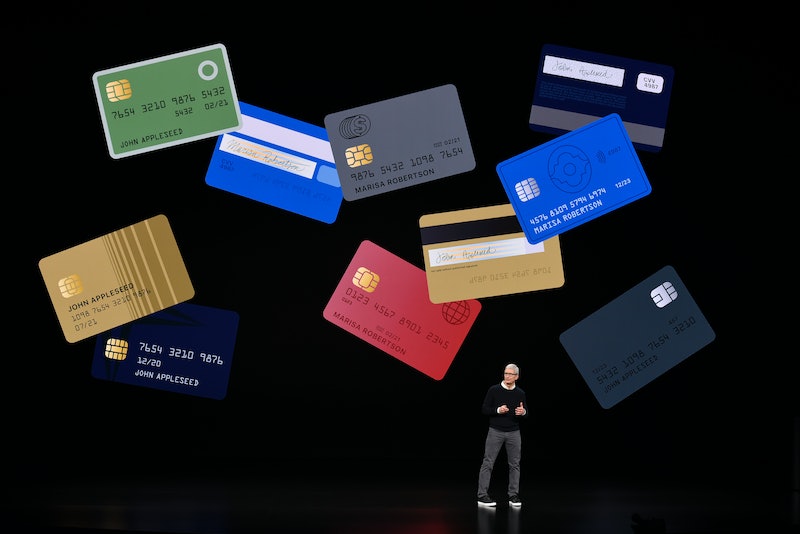 In March, Apple announced the upcoming launch of the Apple Card, and on Aug. 6, a select number of customers had the opportunity to use the new product. However, not everyone who applied has access to the preview — at least not yet. So, if you can't get the Apple Card right now, there are a few possible explanations.

Although Apple has not disclosed exactly how many people have early access to the Apple Card, it has mentioned that a limited number of customers were able to sign up for it now, before the official launch to the rest of the United States later this summer. But the invitation to sign up doesn't mean you'll be instantly approved for the Apple Card — there are still a handful of boxes you have to check.

For one, users need iOS 12.4 and an iPhone 6 or newer iPhone model. Plus, in order to be considered, customers must enter their personal information including their birth date, address, income, and last digits of their Social Security number. After this, the application is sent to Goldman Sachs, who Apple has partnered with in order to roll out the card. The financial institution then checks your credit before alerting you within minutes of whether or not your application has been approved. Your credit is checked through TransUnion, so you have to make sure your credit information is unlocked in order for them to access it. You can do this by logging into TransUnion and following the same steps you did to lock your score.

The buzz behind the Apple Card is growing, despite being only available to a select amount of users, because of the promise of helpful and easy-to-use features. Apple has included 24/7 support for the card through text messaging, making any troubleshooting or concerns easy to approach. The company has also included real-time views of your balance along with mapped locations of where you made your purchases.

Plus, Apple wanted to emphasize financial growth, according to its press release. It included features like Daily Cash, which lets you get cash back for your everyday purchases. You get 3% cash back when buying Apple products, 2% every time you use Apple Pay, and 1% every time you use the physical, titanium card. The card also encourages users to have more informed options for paying off interest, by fully laying out options and suggesting to pay more every month to pay interest off sooner.

Aside from its focus on financial health, Apple prides itself on the security of the Apple Card, according to the press release. With all the information of the card on Apple Wallet and no card information displayed on the front of the card like other credit cards, it's difficult for someone else to access your information. You make purchases within the app and although the card helps you track your spending and schedule payments, it doesn't allow Apple to keep any information about where you're shopping or what you're buying.

If you're one of the people counting down the moments 'til you can use the Apple Card, you don't have too much of a wait left.