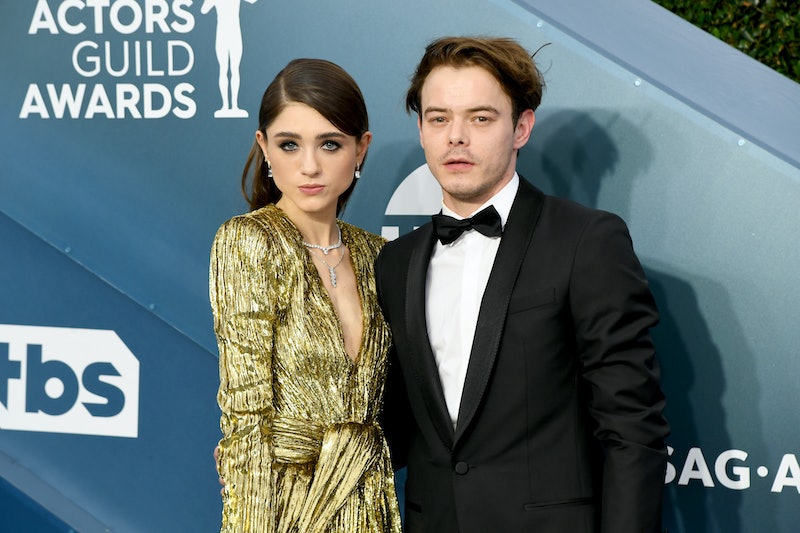 Jonathan Byers and Nancy Wheeler forever. Charlie Heaton says his relationship with Natalia Dyer did not set out to be so secretive. The Stranger Things actor opened up about his notoriously private relationship with Dyer in a cover story for GQ published on Monday. While fans have watched their fictional counterparts Jonathan and Nancy become a couple and battle it out with a Demogorgon in Netflix's Stranger Things, Heaton and Dyer’s relationship followed a different trajectory rooted in less certainty between two young co-workers.

“We didn't really know what the relationship was,” Heaton told GQ. More so, the two didn’t want to jeopardize their shared work environment. While Heaton and Dyer were initially uncertain about the nature of their relationship, Stranger Things co-creator Matt Duffer recalled a chemistry read between the two that proved otherwise. He told GQ, “That first audition, we did a chemistry read with [Heaton and] Natalia, and sparks were flying.”

Heaton and Dyer have been linked since 2016. While they never confirmed their relationship in the early stages of their coupling, the duo regularly shared photos of each other on Instagram. Heaton and Dyer inevitably made their red carpet debut together in 2017 at the British Fashion Awards. Per Heaton’s GQ profile, the two currently live together in New York City.

This isn’t the first time Heaton has provided insights into his relationship with Dyer. In an interview with V Man in February 2019, Heaton opened up about having a partner in the same industry. “Because we work in the same industry and have had similar trajectories, we've gone through it together," Heaton said. "Sharing that does bring you closer. They understand something that maybe no one else would. You go into high-pressure situations together but you can share those insecurities or whatever they are.”

In an interview with Refinery29 in July 2019, Dyer similarly shared rare details about her relationship with Heaton. “It’s an interesting thing to work with somebody who you go home with,” Dyer said. “It’s always really fun. We’re really comfortable with each other, so we can play and feel more free, and we can talk about it before.” She also explained the importance of privacy and said, "That’s something important to me — with my family, with my friends, I really like to keep it for me.”