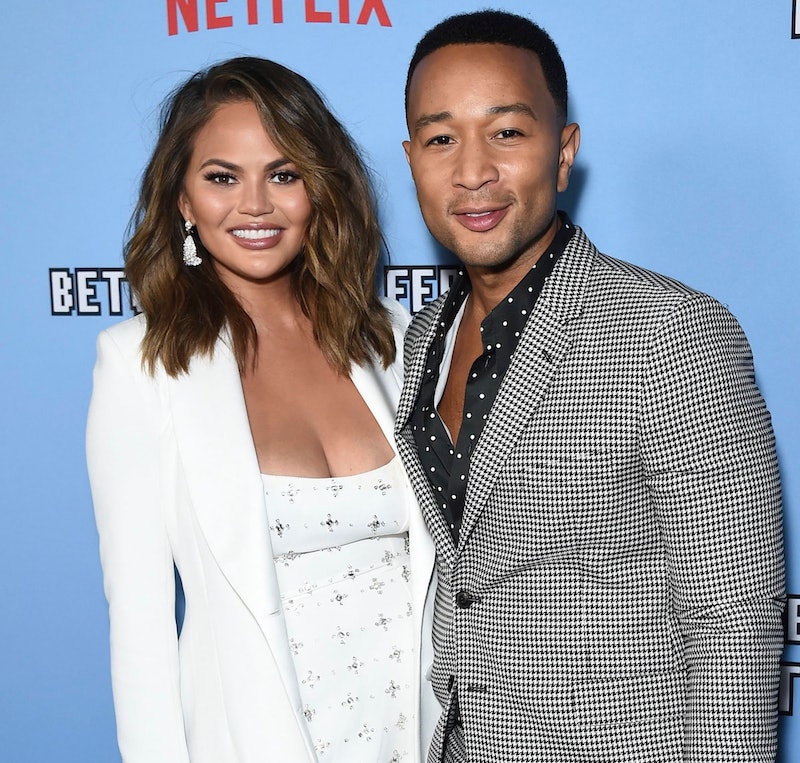 Whether speaking out about family separation at the border or weighing in on President Trump's impeachment inquiry, Chrissy Teigen and John Legend are no strangers to speaking out about politics — and that includes their recent presidential endorsement for the 2020 election. In their new Vanity Fair cover story, Teigen and Legend picked Elizabeth Warren as their top choice to challenge Trump, citing her authentic attitude and strong work ethic.

In the profile, both stars initially seemed hesitant to discuss the primary candidates, but Legend ultimately endorsed the Massachusetts senator, saying, "She’s the best candidate running today and she comes at it with joy and with sincerity and with a wealth of knowledge and experience." Teigen agreed, adding, "I love Elizabeth Warren. I also love Kamala Harris."

Legend also called out any men who, despite Warren's qualifications, won't vote for candidates who are women. "You see someone as transparently competent and eloquent and on fire as Elizabeth Warren and then you hear some guys just are not into voting for a woman," he said. "Why do guys feel so threatened by the idea of a woman president?"

While the couple is looking ahead to the next president, they've been involved in a bit of an online feud with the current one. Back in September, Trump tweeted about Teigen following an MSNBC town hall on mass incarceration, referring to her only as Legend's "filthy-mouthed wife." On Twitter, Teigen replied, "lol what a p*ssy *ss b*tch. tagged everyone but me. an honor, mister president." Trump blocked Teigen in 2017, after she tweeted, "lolllllll no one likes you."

During their VF interview, Legend noted that Trump tends to target women who criticize him, specifically women of color. "So he had to go after [Teigen]," he said, "Every time he does something like this, he just makes himself look more terrible." (For example, in July, Trump tweeted that progressive Democratic Congresswomen should "go back" to the "crime infested places from which they came." Although no specific names were mentioned, the tweets were believed to be directed at Ilhan Omar, Rashida Tlaib, Ayanna Pressley, and Alexandria Ocasio-Cortez, who are all U.S. citizens.)

Teigen and Legend aren't the only celebrities hoping Warren will replace Trump in the White House. In September, Queer Eye star Jonathan Van Ness endorsed Warren because of her stance on healthcare, noting the high cost of HIV medication influenced his decision. That same month, Sarah Jessica Parker was spotted at a Warren rally at Washington Square Park, though the Sex and the City star has yet to publicly endorse her. In early 2019, a handful of celebrities donated to Warren's campaign, including Ryan Reynolds, Shonda Rhimes, and Amy Schumer, according to Politico.

Over the years, Legend and Teigen have used their platforms for advocacy, including the pair helping raise over $1 million for the ACLU in 2018 and Legend starting a campaign called FreeAmerica to fight for criminal justice reform. In 2020, the couple will continue to support progressive values, starting with their endorsement of Warren.