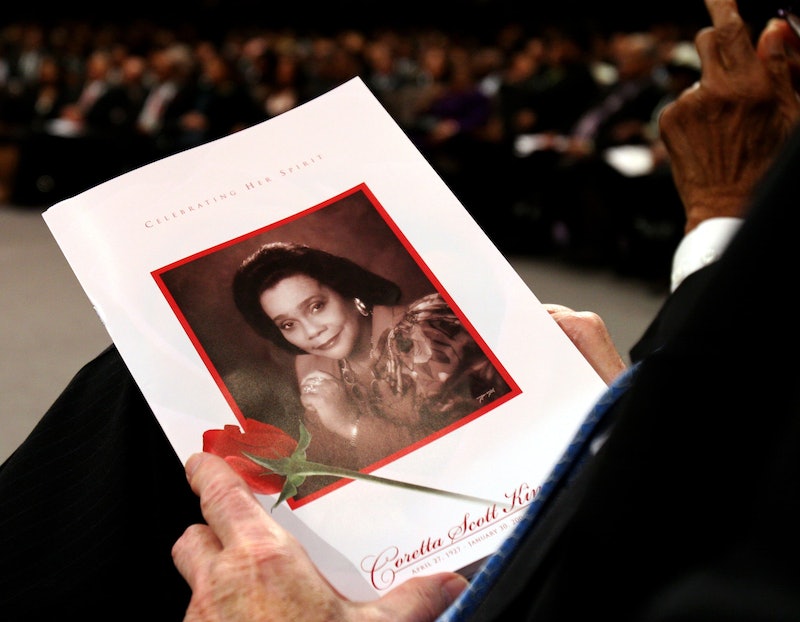 It sure would be nice if Barack Obama's election in 2008 had marked the end of racism in America. As the country has now seen in the most upsetting way possible, that couldn't be farther from how things actually are. That's the basis of why Coretta Scott King's words can't be forgotten in 2017, but it goes beyond that. She speaks to the experience of so many vulnerable Americans, whose voices still don't show up enough. And as long as people like Jeff Sessions keep on getting preference over those people, then King's words bear repeating.

King's letter, which she wrote to Sen. Strom Thurmond in 1986 opposing Sessions' becoming a federal judge, wasn't part of the public record until The Washington Post acquired it in January. Her words regarding Sessions' treatment of minorities, specifically elderly black voters, are just as relevant now as they were then — and they would be even if Donald Trump hadn't nominated Sessions for one of the most important law enforcement posts in the country.

Republicans today have also been carrying out a sustained attack on voter rights, and it targets exactly the same people that King attempted to stand up for in her letter: low-income voters, minority voters, and elderly voters. American citizens with no fewer voting rights than Sen. Sessions himself — and yet they're finding themselves disenfranchised, and he's received a cabinet nomination.

That flawed understanding of the nature of equality is at the very basis of how Trump got elected, whether you're talking about racism, sexism, xenophobia, or any of the other inherently close-minded ideologies that Trump brought to the forefront of the political discussion. King's letter may have been directly addressed to a specific issue — whether or not Sessions was to become a federal judge — but in it she calls for basic, far-reaching rights that she felt Sessions had worked to deny people. "Equal access to the democratic process" for black Americans, one of the things that King expressed her dedication to in the letter, should not be part of some fantasy utopia. And yet, here we are, in 2017, after the election of the first black president, and King's words are being silenced on the Senate floor.

Jeff Sessions, of course, denied all allegations of racist conduct in 1986, and he denied them again in 2017. What it comes down to, then, is Coretta Scott King's word against Sessions'. Unfortunately, it seems as though the party with the majority in the Senate is determined to give priority to Sessions over King. Until that changes, King's words will be important to remember.