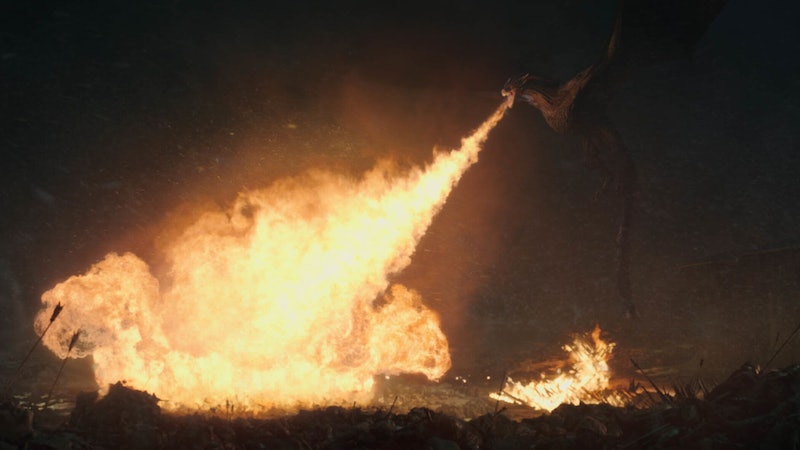 Spoilers for Game of Thrones Season 8 ahead. The Battle of Winterfell was just as intense as fans expected that it would be, and there were a couple of times that it looked like Jon and Dany's armies were going to take out the Night King long before Arya ever charged at him. But there was a moment when Dany seemed primed to be the one to take him out, yet, Daenerys couldn't kill the Night King with fire on Game of Thrones. He didn't burn, at least, and that could be a major clue to his identity and motive on the show. .

Considering that Arya ended up taking him out, we may never know exactly why the Night King survived Drogon's flames. All it took, in the end, was Valyrian steel — just like the other White Walkers. To be fair, we didn't actually see dragon fire take any of the other White Walkers down, just their zombie wight minions.

Could it be that the Night King was a Targaryen? Presumably, the Children of the Forest created the Night King well before the time of House Targaryen, and House Stark, and all of that. Still, the reason that Dany is also one of the unburnt could be connected, lore-wise, to the Night King's ability to withstand fire. Then again, when Daenerys survives flames, all of her clothes are burned off. Perhaps that's just the male gaze in the writer's room on Game Of Thrones, but it seems like the Night King would also be in the nude if the reason he survived had anything to do with him being Targaryen.

Plus, not all Targaryens are immune to fire. Daenerys' brother Viserion certainly is not, and Daenerys proved it by essentially burning him to death. Jon Snow has sustained a small burn in his time. In fact, the fact that Daenerys is flame-proof goes slightly against George R. R. Martin's books. In the books, she was "unburnt" just one time and it resulted in birth of her three dragons. On the HBO series, she was walked through flames multiple times, having taken a dip in boiling water, and emerged just fine.

There's still so much to learn about the Night King. Who was he, what did he want, and did he really go down that easily? With all hope, Bran Stark can take us on a flashback adventure and illuminate some of those burning questions. The Battle of Winterfell may be over, but the war certainly is not, and that business with the Night King requires a lot of 'splaining before Game of Thrones is all said and done.

Maybe it had something to do with the shard of dragonglass plunged into his heart. Luckily, the fact that Daenerys couldn't use dragonfire to kill the Night King wasn't too big of an issue. That said, she's probably going to be a little shook by this whole experience next week. She may have survived, but those dragons are kind of her only combat strategy. What if something else comes to challenge them, next? What will she do? As the Night King proves, dragons can't end everything, and Dany should probably start working on that Plan B.