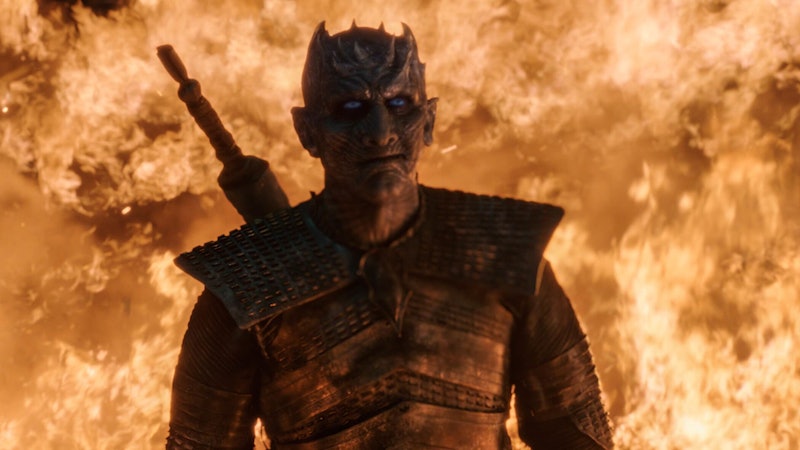 Audiences expected the Battle of Winterfell to be one hell of a fight, but no one could have predicted how it all went down, beat for beat. While plenty of people were killed, there was one character in particular who fans were surprised to see go so fast. Arya killed the Night King after an hour and 15 minutes of flames, zombies, and flaming zombies. But is the Night King really dead, or is this a red herring to keep fans on their toes? After all, it's kind of the undead's thing to...rise from the dead.

Whatever the case, here's how it all went down: The White Walker approached Bran, known as the Three-Eyed Raven, in the Godswood, where he was presumably waiting for these events to take place. But before the Night King could kill him, Arya jumped in to defend her brother. It seemed like it was game over for the Stark when he lifted her up off the ground by the neck, but at the last second, Arya dropped her dagger out of her left hand, caught it with her right, and stuck the Night King with the pointy end — just like Jon taught her all those years ago. Naturally, fans went berserk that all of her training had paid off.

While Arya had never met a White Walker in person before the Battle of Winterfell, she was likely the most qualified candidate to kill their leader. She asked Gendry (you know, before they had sex) last week what the White Walkers were like, and he responded that they were like death. While it's a terrifying descriptor, the Stark wasn't fazed in the slightest — remember how she was trained in the temple of the Many-Faced God?

"I know Death," she told him, stone-faced, as she tossed three daggers effortlessly at a nearby post. "He's got many faces. I look forward to seeing this one." Indeed, all of that time practicing with Needle, training with Syrio Forel of Braavos, reciting her Kill List, and serving the Many-Faced God has served its purpose. As Bran told Theon, "Everything you did brought you where you are now."

Indeed, Arya was never one for needle-point or embroidery, like Sansa. In fact, when audiences first saw the young Stark in Season 1, she was besting Bran at archery, when she should have been inside sewing with her sister. And Arya's fierce attitude only intensified when the Hound killed her friend, the Butcher's Boy, and her father was beheaded in King's Landing.

That's why it was so incredibly satisfying to see Arya take on death itself. And when she stabbed the Night King in the gut, not only did he shatter, but so did the other White Walkers, wights, and even Viserion. But although audiences saw saw these events play out onscreen, it's still possible that the Night King could pop back up in the next episode. After all, Dany's dragon couldn't kill him, so how is a simple dagger able to do the trick — even one that has such a storied history?

As Esquire pointed out, this was Littlefinger's dagger — remember, the one made from Valyrian steel that the assassin tried to kill Bran with back in Season 1? Later, Littlefinger gifted the dagger to Bran, who handed it off to his sister. And thank the gods he did, since Arya couldn't have saved her home without it. But whether or not the Night King is really dead or simply out of commission for a spell, the Starks succeeded in defending Winterfell from death itself, and that's good enough for one day.

Update: A previous version of this article stated that Arya killed the Night King with Needle when it was simply a dagger. The article has been updated to reflect these changes.

More like this
Alicent's Green Dress In 'House Of The Dragon' May Be An Act Of War
By Kadin Burnett
Nicola Coughlan Shared A Lady Whistledown Excerpt From ‘Bridgerton’ Season 3
By Grace Wehniainen, Alyssa Lapid and Sam Ramsden
An 'Everything Everywhere All At Once' Star Just Joined The 'Loki' Season 2 Cast
By Grace Wehniainen
You’ll Definitely Recognise Both Of Ty Tennant’s Parents
By Maxine Harrison
Get Even More From Bustle — Sign Up For The Newsletter