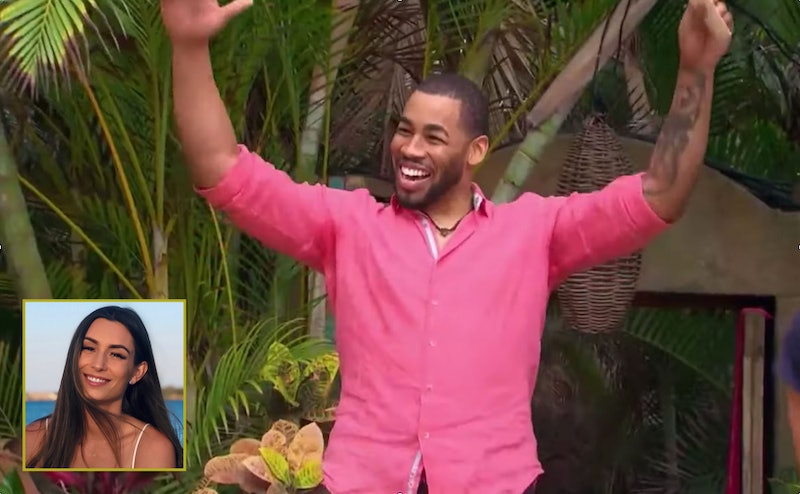 After competing for Nick Viall's heart on Season 21 of The Bachelor, Astrid Loch ultimately found love on Bachelor in Paradise Season 5 with Kevin Wendt. She knows first hand what it's like to weather emotional ups and downs of Paradise, and she's dishing all to Bustle. Read what she has to say about Mike's million-dollar smile, Blake and Hannah's Paradise love triangle, Clay and Christian's fight for Nicole, and more in this week's recap.

“Maybe if I would have hooked up with Blake I’d still be there.” -Bibiana

We made it to Week 2 in Paradise, and boy am I happy. Full disclosure: I was supposed to start writing these recaps last week, but to be completely honest, I didn’t think I could recap the first week without inserting my biased opinion. For one, I’m friends with too many of the people involved. Secondly, the show didn’t really portray the whole story, which was evident by Blake nearly breaking Instagram Tuesday night. Thirdly, sometimes it’s best to just stay in your lane and let everyone else talk a topic to death *sips tea*. And with that… let’s move on!

Monday’s episode picks up at the rose ceremony that in a not-so-shocking twist sends home Annaliese, Jane, and Bibiana (RIP Friend). Seeing Chris give his rose to Kristina seemed a little out of left field, and I couldn’t help but be reminded of last year when Bibiana gave her rose to Colton. Now, maybe there was a spark we didn’t get to see between those two… or maybe there’s a producer somewhere working extra hard.

Who better to kick off a new week in Paradise than the self-proclaimed Mayor of Paradise Jordan Kimball? I have some mixed feelings about Jordan retuning to the beach. On the one hand, I can’t help but laugh at everything that comes out of his mouth. On the other hand, I just don’t think Jordan is ready for love and marriage. I mostly say this because in the interview where he talked about finding those two things he also says, “Someone’s gonna be calling me daddy.” Not to mention Jordan spent most of his time talking about Blake’s love pentagon during his chats as well as on his one-on-one date with Nicole. Maybe he should have just taken Blake on the date?

And then there's the breath of fresh air that is Mike Johnson. Not only is he tall, dark, and handsome, but he actually asks the women questions about themselves. Ultimately, he decides to take Caelynn on the date and although I’m not sure I see sparks, I do think Caelynn needed to get some time away from that beach. I have to admit I didn’t get to watch Hannah B.’s season so I don’t know anything about Mike, but let me tell you, I totally get the hype. If he doesn’t find love in Paradise, then MIKE FOR BACHELOR or we riot.

Back on the beach we see Blake shooting his shot with Hannah G., and she clearly doesn’t hate it. Dylan, on the other hand, can barely sit still while the two of them are kissing and dancing under the moon and decides to confront them. Now, I don’t think anyone can blame Dylan for being upset by this, but let’s not forget that this is only the second week of Paradise and jealousy never looks good on anyone. I can’t help but think that Hannah is a lot more into Blake than she is into Dylan, or else she would have walked away with Blake in that moment knowing Dylan was nearby.

With a new day comes new information that further complicates the Blake-Hannah-Dylan triangle. Maybe I’m old fashioned, but I’m very confused as to why Hannah and Blake are in Paradise if they were seeing each other a week before. Not to mention I’m even more confused as to why Blake didn’t take her on a date last week when he had the chance. At this point the only person who’s making any sense is Tayshia, who’s chosen to walk away... and good for her.

Next up on the beach we have Dean… and his mustache? After talking to a few of the girls, including his ex Kristina, he decides to take Caelynn on a date. This is definitely the first time I feel like I’ve seen Caelynn be comfortable in her own skin. I see a spark there and an easiness that comes across as if these two already know each other. Just like Tayshia, Caelynn seems to be pretty content to have removed herself from the love pentagon, and I’m curious to see how these two continue to connect.

I know I should probably be recapping Christian and Nicole’s date but to be completely honest, I just don’t like him. Some might call him confident, but to me he’s just cocky and I don’t want to waste my breath talking about him. Of course this doesn’t mean that I don’t love Nicole, because I do.

But you know who I love even more? Clay. Throughout this whole week, he remained a true gentleman, which was most evident when he chose to walk away from confrontation rather than put Nicole in an awkward position. If Nicole doesn’t chose Clay at the rose ceremony, I will be very personally offended. As for the Jordan vs. Christian fight, I'll talk more about it next week when we get some more clarity on it.

Lastly, because I want to end this recap on a positive note, I want to talk about the Queen of Paradise: Demi. Seeing Demi be vulnerable as she’s talking to both Katie and Derek (and ultimately America) truly shows her in a new light. She might not be everyone's cup of tea, but she certainly has changed this show for the better by bringing such an important topic to primetime TV. Derek of course handled the whole thing the way we would hope for someone to handle it. I’m so proud of Demi for starting this conversation.

That’s all. Until next week!