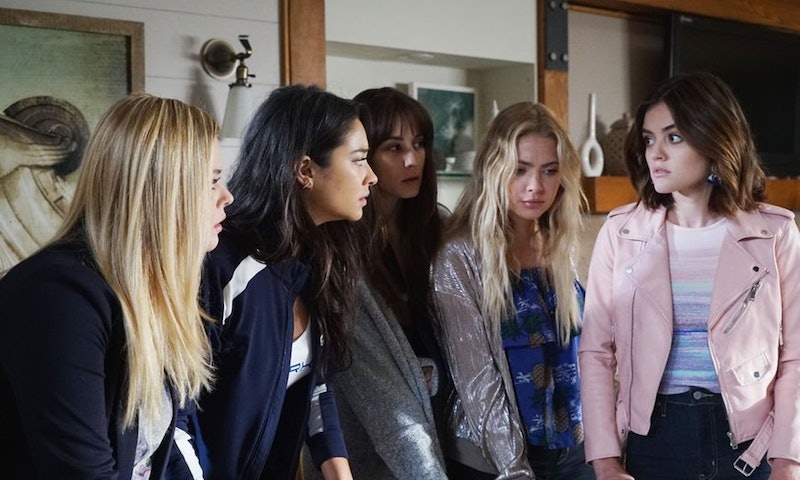 Spoilers ahead for the Pretty Little Liars series finale. After seven years of mysterious black hoodies, heart-pounding twists, and too many red herrings to count, the ultimate Uber A has finally been unmasked, and Pretty Little Liars' most menacing Big Bad is none other than Alex Drake, Spencer's evil twin. (Yep, all those fan theories were right on the nose.) But as much as viewers will be relieved to know who's been behind the show's last twisted game, Alex's motivations are just as high on the list of burning questions. So why did A.D. torture the Liars, anyway?

Mary, the twins' mother, sent Alex to live with an adopted family in England thinking it would be a "Cinderella life," but her new parents soon discovered she had "issues" and abandoned her, leading to a pretty rough upbringing. She then lived in a foster home, but ran away when she was only 10. When she got older, she started working in a bar, and one day, Wren stumbled in thinking she was Spencer. Eventually the two sparked up a (kind of twisted) romance. He introduced her to Charlotte, and the two eventually began plotting against Alex's twin sister and the other Liars.

After Charlotte was murdered, however, Alex kind of flew off the handle (to put it mildly) and went to Rosewood to avenge her death. She became A.D., began tormenting the liars, kidnapped Spencer, and eventually took her place, unbeknownst to the Liars. She even had Wren shoot her in the arm so they'd be impossible to tell apart, and then killed him because she didn't have the heart to break up with him (but not before impregnating Ali with his twin babies).

She then proceeded to trick Toby into sleeping with her (because he thought she was Spencer), kidnap Ezra on his wedding day, and basically rip Rosewood apart (again), all for reasons that seem primarily motivated by jealousy, plus some pushing from Charlotte's own delusions. But for once, PLL wrapped with a happy ending: the Liars cornered Alex, Mona imprisoned her and Mary in her own life-sized doll house, and everyone went on to lead relatively "normal" lives. And with that, the A game is finally, officially, once and for all over ... or so we think.

More like this
The Plane Crash In 'Dear Edward' Is Based On A 2010 Tragedy
By Grace Wehniainen
Keyla Monterroso Mejia Is Finally The Star Of The Show
By Gabrielle Bondi
'That '90s Show' Is Officially Coming Back For Season 2
By Gretchen Smail and Grace Wehniainen
This 'One Tree Hill' Wardrobe Error Is Going Viral On TikTok
By Brad Witter
Get Even More From Bustle — Sign Up For The Newsletter
From hair trends to relationship advice, our daily newsletter has everything you need to sound like a person who’s on TikTok, even if you aren’t.