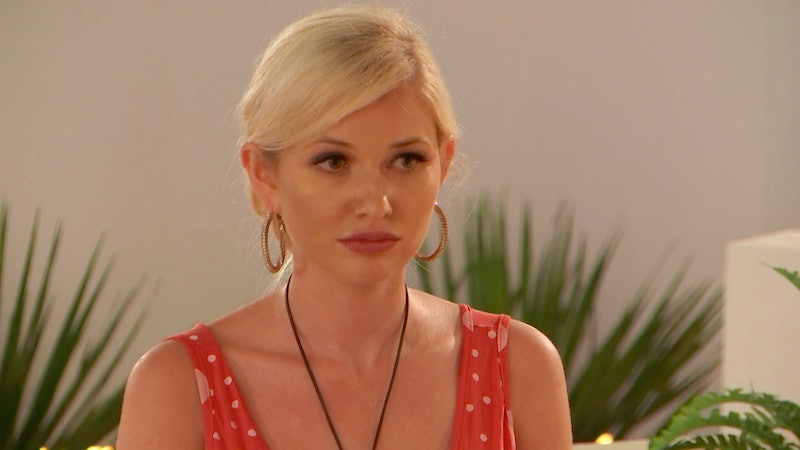 The fall out from Casa Amor last week on Love Island left audiences shocked and saddened for the contestants who were dumped by their partners. It happens every year, but this time around, it was particularly difficult to watch as loyal Amy and Amber were left in the lurch. Now it's been confirmed that Amy has left Love Island after being left heartbroken by Curtis.

In scenes that aired in Tuesday's episode of the ITV2 reality show, Amy explained her decision to leave to Curtis, saying she didn't feel she'd be ready to meet someone else in the time left on the show.

"Realistically for me, I’m not going to be ready in the next three weeks to meet someone else," she said. "Realistically for you, you will not be happy because you’ll always put me first because you’re such a good person. I want you to be happy. You 're not going to be happy while I’m still here. So, I’m leaving today but it’s a positive thing because I’m going to go and start the rest of my life."

Cabin crew member Amy Hart and professional ballroom dancer Curtis Pritchard seemed like the ideal Love Island couple. It only felt like a matter of days before Curtis asked her to be his "half-girlfriend" and the couple slow danced at an intimate date. Everything was seemingly dreamy, and the £50,000 prize money looked like it was in sight until the Casa Amor relationship test returned.

One of the biggest twists in the show, saw the girls and boys separated into two villas with new contestants coming to stay. Audiences at home had to watch as Curtis' attempted to crack on with new comer Jourdan, whilst Amy stayed faithful in Casa Amor and told the other girls she was falling in love with Curtis.

Although nothing actually happened romantically between Curtis and Jourdan (other than a few kisses during challenges), the damage was already done. A guilty Curtis admitted to Amy on her return that their relationship was no longer working, and he could not see a future between the two.

Knowing that Amy hadn't had a boyfriend previously made the breakdown of their relationship even more painful, if not intrusive, to witness. Getting your heart broken for the first time is already awful enough, but it's even harder on national television with the whole country watching and analysing the fall out.

Unfortunately after the return from Casa Amor, Amy had a particularly tough time in the villa, and following her split from Curtis, there were reports that she had left the villa for therapy sessions.

Trying to move on and get over an ex whilst living in the same house is devastating enough, but Amy sadly had to watch on as Curtis pursued another potential romantic avenue. This week saw 28-year-old Maura Higgins confess her feelings for Curtis, who had slid into her DMs prior to the show. After Maura had spoken to Curtis and a few of the other girls about her feelings, Anna suggested that she should have spoken to Amy first before cracking on with the 23-year-old pro dancer.

But despite everything that happened, when discussing her feelings about leaving in the Beach Hut Amy said she didn't have any bad feeling towards Curtis or Maura. "I’m leaving here today not holding any grudges against anyone, not against Curtis, not against Maura, no one," she explained.

It's completely understandable that Amy would want to leave the villa. Self-preservation and doing what's right for you should ultimately be the priority of all contestants on the show. And it sounds like that's exactly what's behind Amy's decision. Good on her for putting her wellbeing first.

More like this
'Love Island' Has Added Yet Another Bombshell To The Villa
By Bustle UK
Molly-Mae & Tommy Fury Revealed Their Baby Girl's "Really Unusual" Name
By Sophie McEvoy and Sam Ramsden
Every Season Of 'Love Island' Ranked Best To Worst
By Alice Broster, Frances Stewart and Sophie McEvoy
The ‘Love Island’ 2023 Cast Is Messy AF
By Jason Okundaye
Get The Very Best Of Bustle/UK
Sign up for Bustle UK's twice-weekly newsletter, featuring the latest must-watch TV, moving personal stories, and expert advice on the hottest viral buys.

This article was originally published on July 9, 2019