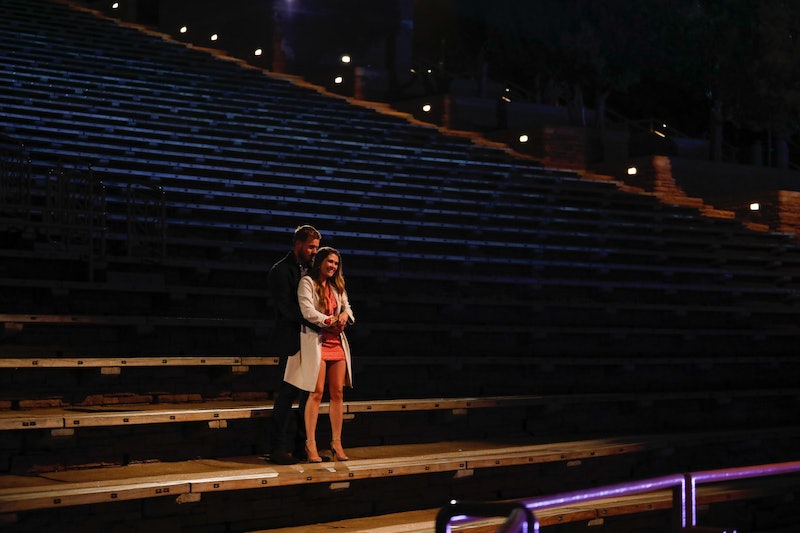 Colton's final four on The Bachelor has been a strong showing. Caelynn, Tayshia, Hannah G., and Cassie are formidable contenders for Colton's heart, and basically all the ladies have told Colton that he has their respective hearts. It's cute and stuff... but not really, because Colton has to dump three of them in order to complete the show. Unfortunately, for Caelynn, it was her turn during hometown dates. Why did Caelynn go home on The Bachelor? Colton's other relationships were moving along at a faster clip, and so he had to let Caelynn go.

And it's a shame, because Caelynn really did seem to care about Colton. They got along really well, and she revealed deep secrets during their dates, telling him about her sexual assault and its aftermath, sharing news about her family, and more. And Colton did the same, speaking about the role assault has played in his own life (he had a partner that was a victim of sexual assault, so he learned about being an ally). These two had spark, but they also had that mental mixing that keeps a relationship interesting way after the lust goes away. It's a total shame that it didn't work out.

Caelynn's hometown date with Colton went as well as any other hometown date could go. They rode in a horse-drawn carriage while she pointed out every minor monument setting in her life (the place where she sneezed six times in a row was particularly powerful), and Caelynn introduced Colton to her family. Her stepdad was apprehensive (natch); her mom was nice enough (also natch); and Caelynn said, "I love you." Standard stuff.

Unfortunately, it wasn't enough — Colton sent Caelynn home, telling her that he didn't know what to say. She said that she "saw it" (meaning them as a couple) and that she felt like an idiot for being blindsided. Caelynn was in love, and Colton smashed her heart to bits on national television. Ugh. She let him comfort her, which is more than I would have done, to be honest, but Caelynn is a nicer person than me. She was so surprised that the only thing that she could say in the limo home was that she thought she was getting engaged at the end of it. "But Colton fooled me," she admitted. Ouch.

Really, the last three minutes of this episode of The Bachelor was an audition tape for Caelynn to become the next star of The Bachelorette. One of Caelynn's last sentences was, "I hope there's someone out there for me," which, of course there is. Now, you're probably going to meet him on television, because no one can resist a pretty girl who needs a new lease on her love life. Will there be drama? Yes. Will she cry? Most certainly. Will it be more entertaining to have Caelynn as the Bachelorette than to have Colton as the Bachelor? One million percent, and with far fewer shower scenes, probably.