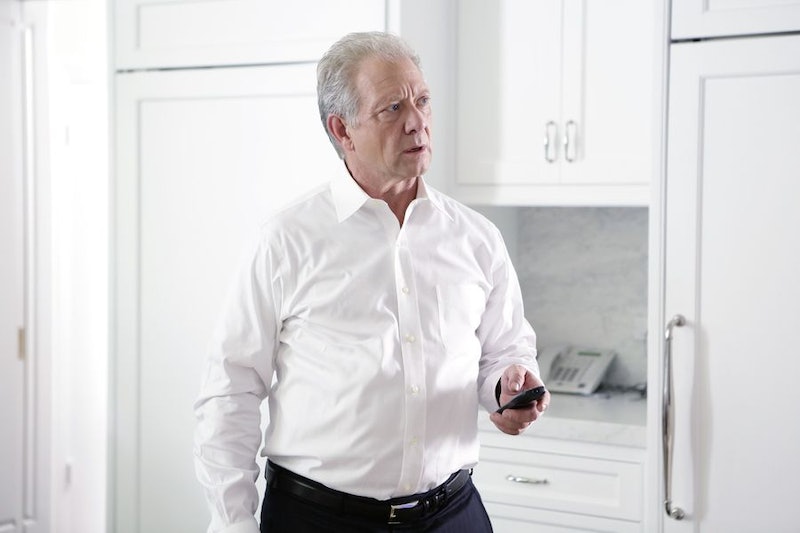 After dealing with the emotional roller coaster that has been the real life presidential election, the results are just now playing out on Scandal, and is it possible their version of the election aftermath is even more dramatic than what actually happened?! So far this season, that's exactly what it looks like. Now that we know Frankie Vargas, the president-elect, is dead, his VP, Cyrus, could be next in line for the job... but what if he's responsible for Frankie's death himself? On Thursday night's new episode, the reason Cyrus and Frankie fought on Scandal was finally revealed, and it's pretty shocking.

Last week, we found out that before Frankie was shot on election night, he and Cyrus had a pretty serious fight that was caught on camera where Frankie vowed to put Cyrus in jail the second he became president. But so far, no one has any idea what that argument was about — until now. During a meet up with his ex-flame, Tom (who is still creepy AF), Cyrus revealed that Frankie was having an affair with Jennifer Fields, the same woman who made the call to the FBI that exposed Cyrus as the killer.

Tom, being the sketchy, actual hit man that he is, offers to kill Jennifer for him, but Cyrus seems to turn him down... seem being the operative word here. Instead, he tells Tom to convince her to leave the state, which to Tom means beating her to a pulp.

Later, when Jennifer shows up to see Frankie bloody and bruised and he finds out what really happened, Frankie loses it — and that's the fight that's in the video. After explaining that he actually wasn't having an affair with Jennifer, Frankie threatens to have him arrested, and in his rage, Cyrus goes to find Tom and tells him to call off anything else he has planned.

It may not have been Cyrus' intention to have Jennifer hurt, but what did he expect doing shady dealings with a guy like Tom? He's never been the kind to have a chat with someone and let it be. Of course Jennifer was going to end up seriously hurt, and now, we know that later on, she was killed in the explosion that happened right after the election.

It'll be interesting to see whether this means the end of Cyrus' political aspirations or not. If Frankie was here, he would be having none of this!