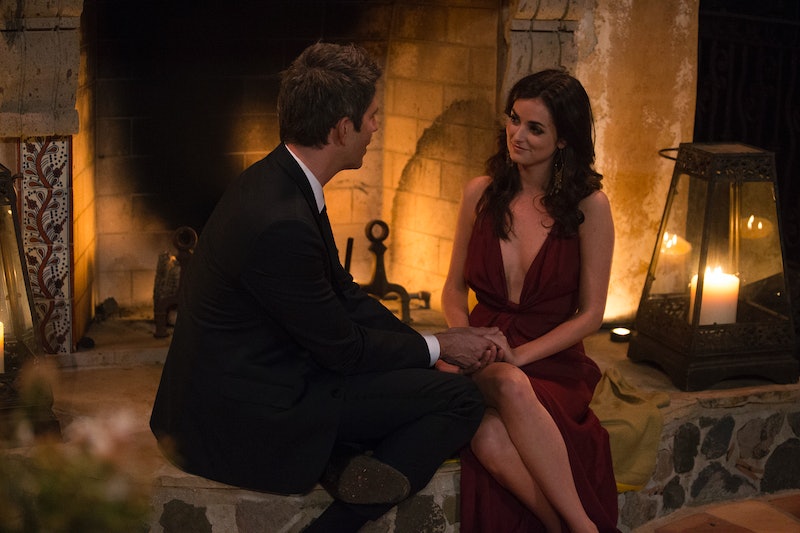 There comes a time in every Bachelor contestant's life when she has to make the decision — should I stay or should I go? At some point, you have to know that you're not getting picked for a rose or that the relationship isn't going anywhere. For Jacqueline, the Feb. 12 episode of The Bachelor was that point. Why did Jacqueline leave The Bachelor?

Things are finally winding down on the show — hometown dates are coming up, and Arie has to make some tough decisions about who will keep on this journey to love with him. Jacqueline has been flying under the radar most of her time on the show. She hasn't been on the bottom, but she hasn't been on the top, either, and Arie has given her a single one-on-one date. One instance of quality time together does not a relationship (or an engagement) make, and the doubts were starting to set in for Jacqueline. How was she supposed to be into Arie if she didn't even know him? (Hear, hear.)

In a heart-to-heart with Kendall, Jacqueline admitted that she'd been holding back in her feelings with Arie because she doesn't want to get hurt. In a later confessional interview, Jacqueline said how confused she was. "It's hard to watch other people move ahead with him. Other people are just more sure," she said. "I don't know if we're not compatible. What if we could be great together? I don't really trust myself to make these decisions ... I always sabotage good things."

At least Jacqueline had it within herself to talk to Arie. She went to his hotel room after his date with Becca, took a sip of wine, and let it all out. Jacqueline said:

"I think part of me is really falling for you. I think at the same time, though, when I'm looking at who you should be taking to hometowns, I think maybe I'm not confident enough in the feelings that I have to justify that at this point. I had this moment of doubt on our date and I wasn't really willing to listen to it at that time ... there have been swirling doubts since that date. I'm worried I'm going to end up in Scottsdale, with you, married, and wonder, how did I get here? We didn't have the base or foundation."

While Jacqueline told Arie that she could regret her decision in 10 minutes, she ultimately did the right thing. Why force a relationship when you don't feel it? Arie tried to get her to stay for a minute, but dude, let her make her decision. That's why we have gut feelings — they let us know when something is innately wrong, and clearly, Jacqueline knew that she shouldn't be on The Bachelor. It takes a strong sense of self to know that.

What's annoying about the whole situation is that Arie made a point of saying that he was scared that she had school left and that her life was in a stage of upheaval, but he thought they had a connection to make it work. I recognize that this is a fantasy and it's The Bachelor, but that's not how the world works. It's not always connection that keeps people together. Life circumstances have to match up, too. Jacqueline knew deep down that if she ended up in Arizona, she wouldn't be happy, and she made the right choice to leave Arie behind. She says that she thinks that she's not good at being happy, but Jacqueline made a huge step forward in figuring out what she wants. Knowing what you don't want is as important as knowing what you do want, and Jacqueline needed to leave The Bachelor to suss it all out. Best of luck, girl.