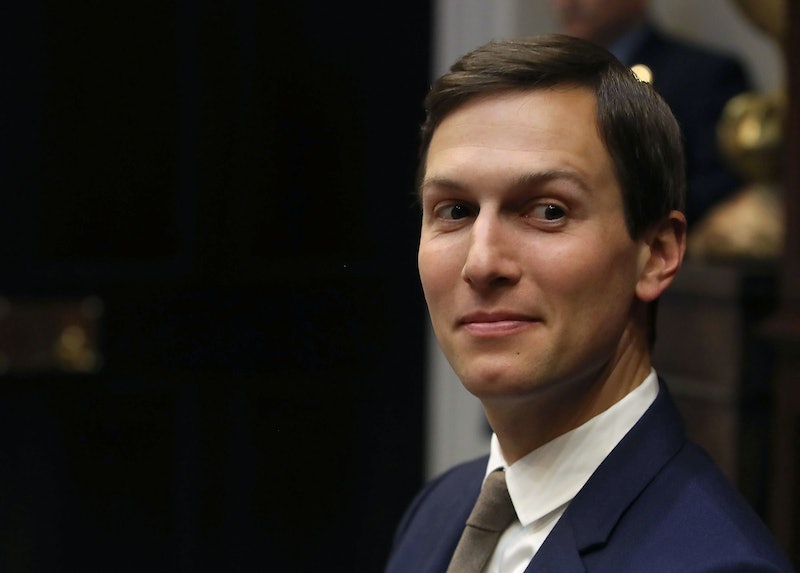 Jared Kushner may no longer have the needed credentials to do his job. The president's son-in-law and official "White House Innovations Director" had his interim security clearance downgraded on Feb. 16, barring him from key intelligence briefings he's been allowed to access. And while other executive appointees were also impacted by that change, officials say the reason Kushner's security clearance was downgraded is a situation unique to him and only him.

Current and former U.S. officials told the Washington Post, on the condition of anonymity, that foreign officials from at least four different countries have privately conferred on how Kushner's potential weaknesses could be used to sway him, making him vulnerable to foreign blackmail. Those points of vulnerability include his inexperience in diplomatic maneuvering, his financial situation, and his family business' possible entanglement with foreign investors.

The countries that have reportedly sought to leverage those vulnerabilities against Kushner include the United Arab Emirates, Israel, Mexico, and, perhaps most notably, China.

It's been over 13 months since President Trump ascended to the Oval Office, bringing Kushner along with him and charging the 37-year-old with a host of diplomatic responsibilities. But during that time, Kushner failed to earn full security clearance approval. Deputy Attorney General Rod Rosenstein warned the White House on Feb. 9 that Kushner's application would be delayed, though it's unknown what specific issues affecting his clearance Rosenstein shared, if any.

And while Chief of Staff John Kelly has insisted the downgrade won't impact Kushner's ability to fulfill his White House role, many observers are calling that assessment into question.

"I can confirm without a doubt that it is not possible to be on the front lines of diplomacy as the chief representative of the United States without the highest level of security clearance," wrote Jen Psaki, in a recent op-ed for CNN.

Psaki is a former Obama administration spokesperson and communications director. Psaki noted that a top-level security clearance is the only way to learn crucial intelligence outlining key data about individual foreign actors and the nations they represent. She wrote that without top-secret security clearance, "it is impossible to do the job of chief negotiator or chief representative for the president."

Outside of the F.B.I., which heads up the process for granting security clearances within the White House, no one knows exactly why Kushner's application has been stalled for so long. But some speculate one reason could be tied to the repeated changes he made to his original security clearance application.

On his first version (which Kushner has referred to as a "draft"), the president's son-in-law listed absolutely no one under the section asking about "foreign contacts." Several amendments later, Kushner had added more than 100 people to that list, among them Natalya Veselnitskaya. She's the Russian lawyer who orchestrated the infamous July 2016 meeting at Trump Tower, wherein supposedly compromising information on Hillary Clinton was to be offered to the Trump campaign.

Kushner's previous title as CEO of his family's business, Kushner Co., brought him into contact with a range of foreign persons. One case in particular exposed the potential hurdles standing in the way of a security clearance for Kushner. The family company will owe over a billion dollars at the start of 2019 on one of its New York properties — 666 Fifth Avenue. Thus far, they've been unable to secure much-needed financial investment to make the skyscraper — bought in 2007 for $1.2 billion at the behest of Kushner himself — financially feasible.

Roughly a week after Trump's election, Kushner had dinner with Wu Xiaohui, chairman at the Chinese Anbang Insurance Group. The Chinese company was potentially interested in investing in the Fifth Avenue property. When news of that possible deal came out, the negotiations were abruptly ended.

The obvious conflict of interest drew immediate criticism from Democratic politicians. Many also vocalized their outrage at the mention of Kushner's name during a speech to Chinese investors given by his sister. In May of 2017, Nicole Kushner Meyer encouraged her audience to invest the required $500,000 in Kushner Co. real estate, and take advantage of the EB-5 visa program that awards visas to foreigners who put at least half a million dollars into American companies. The company had to later apologize for the appearance of pay-for-play that Kushner's name-drop implied.

Aside from his security clearance application mishaps, Kushner has also come under scrutiny for the way he has approached diplomacy. In stark contrast with previous protocols, Kushner took meetings early, often, and sometimes alone with Chinese officials. Given his lack of experience in navigating international diplomacy, Kushner's naiveté led some U.S. officials to describe his as China's "lucky charm."

If Trump wants to, he can unilaterally grant Kushner a top-level security clearance. But the president has said he will leave that decision in the hands of Kelly. So for now, Kushner will be trying to do his job with seriously reduced access to intelligence.